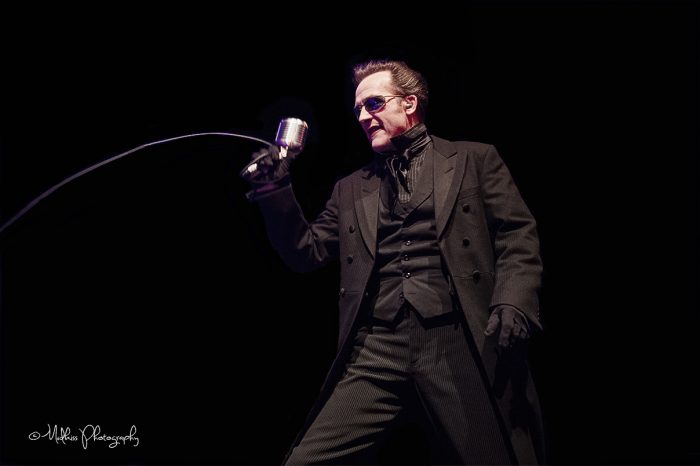 Having entered the stage to a prog rock intro, before beginning their set, Captain Sensible gave us the briefest of history lessons. The 70s before punk was boring –  Yes and whispering Bob Harris had a lot to answer for.  The Damned had to do something: “We had to rid the world of that prog rock shit and this is what we came up with.”  And with that the band launched into “Neat Neat Neat”.  It’s easy to forget how amazing and fast the first Damned album was when it arrived, and still is!  Ignore all that stuff about the varispeed being turned up so it went faster – just accept it for how it sounds.  Tonight we were treated to the whole album in one sitting. 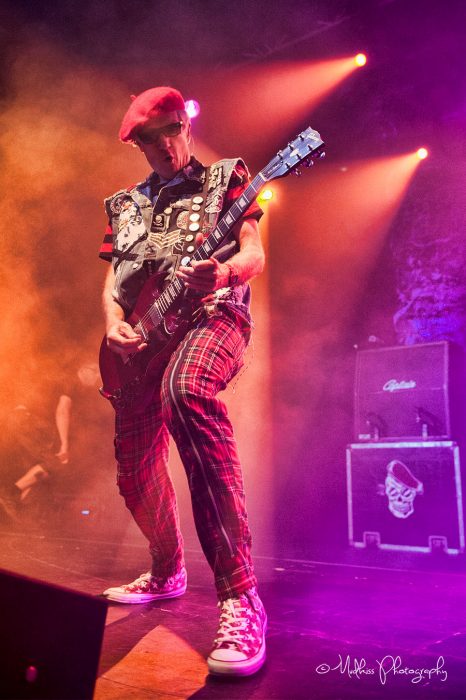 Well….not quite. Something was missing between “Born To Kill” and “Feel The Pain” and just after “New Rose” a voice from the crowd shouted “Stab Yor Back”. They had missed out one of the fastest and most sonically challenging songs from the LP! Presumably something to do with it being a Rat Scabies number rather than forgetfulness. In response to the complaint, they launched into a 10 second cheezy keyboard music hall version before settling back into the rest of “Damned Damned Damned” with “Fish” dedicated to “Wiggy Ramone” adding more fuel to those rumours.

Hearing all these songs together brings home how Dave Vanian’s voice has changed over the years.  Every now and then he would yelp as if it was 1976 again only to settle back into his preferred deeper vocal range. There is no denying that he has one of the best voices in punk rock. While Dave Vanian is the only person to have stayed the full 40 years of anarchy, chaos and destruction of the Damned, Captain Sensible is the mouthpiece and centre of attention.  And he knows it.  With his “Captain” guitar cab and skull/beret logo on the flight cases, and overall silly demeanour (“Set the Zimmer frames to stun!”) you can’t compete with him.  After “I Feel Alright”, Sensible triumphantly announces “And that’s the album that beat the Sex pistols by 6 months. THEY HATE THAT!”.

And there it is. The reminder that of the 3 bands vying in schoolkids’ opinions for best punk band, only one of them stayed the course.  They were all different of course and there doesn’t have to be a “best” – The Damned were faster, more Stooges than Faces and the cartoon character antics marked them out as not taking themselves too seriously.  The Pistols shone bright and fizzled out in ’78.  The Clash got lost on an American Highway and called it a day in the mid 80s a little too late, but The Damned, they just kept plugging away.  Constantly touring.  The Pistols were the threat to society, The Clash the conscientious and earnest revolutionaries and the Damned provided the pantomime. 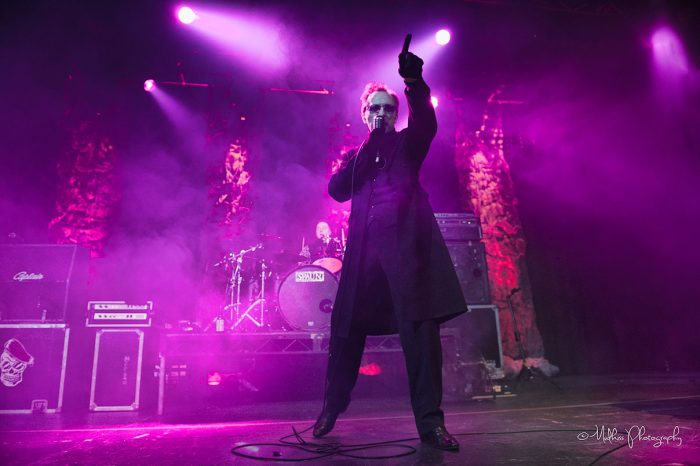 Having completed “Damned Damned Damned”, Sensible asked aloud the question “How to follow that?” and quickly shouted the answer “With the rest of the career that’s how”.  And it WAS a journey through their career, mostly punctuated with a bit of Sensible narrative: “It was better in the 80s, you didn’t have all these toffs with beards playing acoustic guitars” before “Disco man”; “Did you see us on the Young ones?” before “Nasty”.  At the midpoint of a set stretching over 2 hours, they delivered “Grimly fiendish” in a way that transformed an 80s goth anthem into a 60s pop tune and then they delivered actual 60s tunes (“Eloise” and “Alone again Or”) as 80s pop tunes.  Usually these poppier moments would see a surge of old punks to the bar – but not tonight it seems.  I still have an uneasy feeling when I hear them.  It takes me back to school.  People saying “Do you like the Damned?” and having to respond with a cryptic “Yeah, but not THAT Damned”.  Over time the catchiness gets to you and you can’t help but like the variety in their sound.  Actually Punk Variety might be the best way to describe the band to anyone who has never experienced them live!  Delving into “Strawberries” they played “Generals”, “Stranger on the Town” and “Ignite” – including a roving mic pointed into the crowd and some moves from Mister Vanian that looked  suspiciously like Vic Reeves trying to conjure the Dove from Above.  But somehow, he still looks cool. No-one else could get away with it.  And as I was pondering how his current look seems to be taking on something of a ghostly Johnny Cash he treats us to a round of “Ring of fire”! 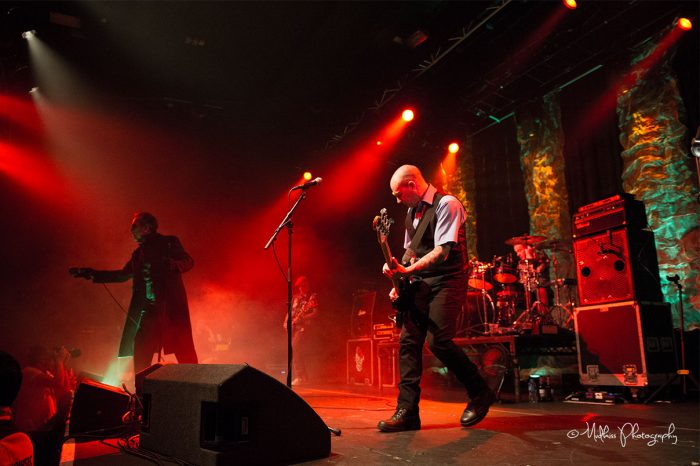 It wouldn’t be a Damned gig without the other staples: “Wait for blackout” and of course songs from, in my humble opinion, their best album – Machine Gun Etiquette. “Lovesong”, “Anti Pope” and “Smash It Up” saw the dance floor getting properly raucous with a bit of “rough and tumble” and then it was done.  We’d started with their first album and ended on the punk rock classics.  At this point they could have got away with leaving a very contented crowd.  Start on a high, end on a high.

For the encore half the band re-appeared in bin liners with Sensible throwing up another 2 fingers, this time to Vivienne Westwood, saying “This only cost me 5p.  Marco Pirroni and Siouxsie Sioux wore ones that cost 200 quid.”  I was wondering how they could top what had gone before.  Up comes “Life Goes On”. Not one of their greatest songs, but I think it was a case of pissing around their territory to remind everyone they came up with the melody before Nirvana came along with “Come As You Are”.  Thinking the high point of the encore was the bin liner gag, they came up trumps with more from the Machine Gun Etiquette era – “White Rabbit” (more of those 60s covers!), a storming rendition of “Melody Lee” and closing on “Noise Noise Noise”.  Noise is for heroes. But the Damned can do music too.  That don’t make them zeroes.

Words by Nathan Brown, check out more of his writing here at his author profile