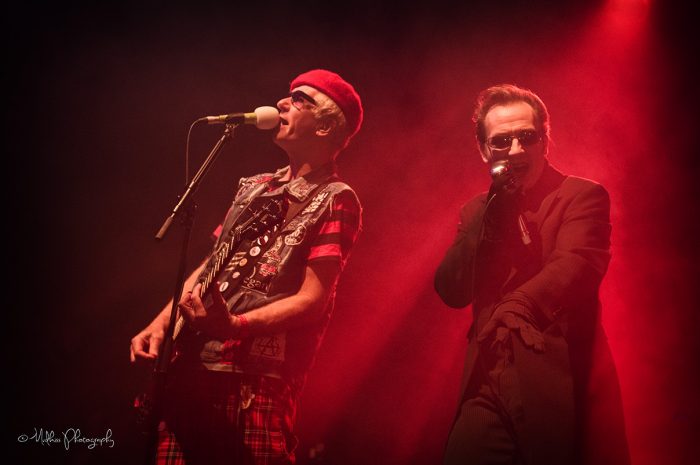 Leicester, a city where strange and magical things happen. The football team pulled off a title-winning modern-age miracle that will almost certainly never be repeated. Be careful where you park, as you never know who could be lying forgotten under your tyres. King Richard III (of York) was famously exhumed from a city centre car park then buried (in Leicester) but his image and legacy seems to be everywhere in the city and that’s no bad thing; a misjudged legend whose reputation seems to be continually undergoing re-appraisal. How prosaic.

And tonight, those legendary, other-worldly troubadours, with their mythical powers of healing and resurrection, are in town. Or rather, a damned good walk out of town in this curiously charmless venue that was plain old Leicester University last time I visited thirty years ago but has now undergone the glittering “O2 Academy experience” and has become, err, Leicester University with a blue sign and event staff.

Nevertheless, up the hill came the faithful subjects of King Richard, with their aches and pains, stresses and strains, confident in their belief that tonight in this shrine, healing would be dispensed. And tonight we were in the presence of real royalty; none other than the legendary Jonno, King of the Punk Nation, was in residence for a most welcome visit to the obvious delight of the band and their fans.

The Damned are on the road to promote new album Evil Spirits, released in April, their first for ten years. The album is a classic Damned sleight of hand, another morphing of their sound, this time with the aid of expert conjuror Tony Visconti, which sees them continue to present a moving target for the mainstream critics to try to hit. It is a very strong album, one of their best, but it is also a product of our uneasy times and this is reflected when, as the lights dim, the intro music is Mars, The Bringer of War, from Holst’s Planets Suite.

Great news for all Damned-aficionados has been the return of the number one bass player in the long history of the band, Paul Gray and, as if to celebrate, they explode straight into Wait For The Blackout followed by Lively Arts and Silly Kids Games; the first three tracks from perhaps their greatest opus, The Black Album. The “Golden Gray” period continues throughout the evening with lesser played Strawberries tracks such as Gun Fury (of Riot Forces), Stranger on the Town, Dozen Girls and Generals.

It’s twenty-six years since I last saw Paul Gray play live with The Damned but I don’t remember him driving a performance with such gusto as he does here tonight. He’s always been right in the top bracket of bass players but tonight he’s all over the stage, trading blow for blow with the Captain on solos. He has the air of a man who put everything on Black, and it came up Black! The Damned have always been visually compelling but now the spectacle is enhanced further. Along with keyboard player Monty, whose sound will be a revelation on the forthcoming album and the driving drums of Pinch, this truly is a band at the top of its game.

Which brings us to the three new songs given a run out tonight, led by the new single, the Vanian-penned Standing on the Edge of Tomorrow. As the enigmatic frontman explains, the band “have moved from the darkness of the graveyard to the darkness of outer space” with a song that enables Vanian to demonstrate again one of the great voices in rock. The two other songs, Devil in Disguise and Evil Spirits indicate that, while the tunes may be typically irresistible, the subject matter on the album Evil Spirits will be distinctly unsettling.

Encores include the obligatory adrenaline shot of Smash It Up and a storming Jet Boy Jet Girl before even the stoniest face in the house is cracked by the sight of Captain Sensible leaping around the stage as he leads a communal rendition of Happy Talk and sending the crowd out into the unwelcoming night suitably fortified.

The magic of Leicester has struck again and the King’s people have drunk from the Fountain of Youth. Long Live The Damned and Long Live King Jonno.