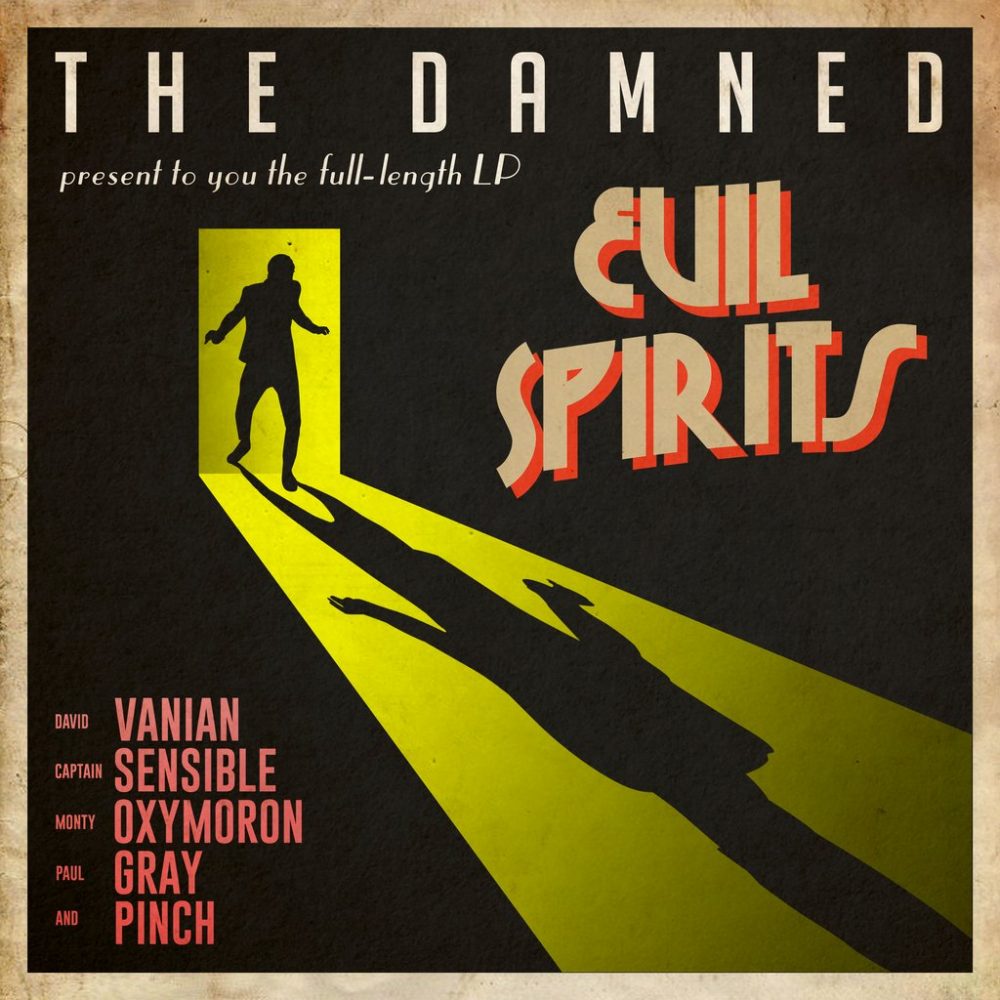 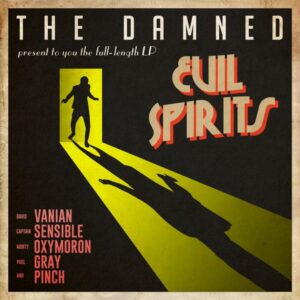 First new album for ten years, Paul Gray back on bass, produced by the legendary Tony Visconti…. the Damned have a new album out.  One of Louder Than Wars most-covered bands who have finally got the kudos and recognition they deserve and not just for being Punk’s Last Band Standing…. punk evangelist but arch-cynic Ged Babey reviews Evil Spirits.

Everybody loves the Damned…. (Well, a lot of people I know and love, have done and many still do..)

Good Old Captain Sensible, he’s a great-bloke…  (I’m sure he is. Everybody says so. I admire his unpretentiousness and loyalty to old friends like Johnny Moped…)

New Rose changed my life…(countless lives… it is one of the greatest british works of art and a definitive UK pop-cultural reference point. )

(But Louder Than War doesn’t do ‘slaggings’ it only writes in positive, glowing terms about everything it covers…)  When you write for love, rather than money, you don’t waste your valuable time on pointless negativity: – this is just my personal thoughts on this album, one mans opinion, given that this is a band I really loved…. and I like to report things with a degree of accuracy… and not be fed hype.

This is more an album for those that discovered the Damned when they released their big-hit cover-versions of Eloise and Alone Again Or. ( Nothing wrong with that. Both great versions of tremendous songs. You can’t help when you were born and when you discovered bands.)

What I find annoying is the way the pre-publicity almost miss-sells the ‘product’.  This is supposedly a return-to-form by the punk-band the Damned and Evil Spirits is: “An album which doesn’t shrink from opposing the dastardly political forces at work in 2018…”  Here are some more extracts from the press release….

“We deliberately recorded the album retro style,” explains guitarist Captain Sensible. “The same way our debut album was made, basically. There’s something wonderful about the seventies sounds; glam, rock and punk records, they all sound so great and Tony specialises in beautifully crafted old school production. He had us all playing live, bashing it out in the same room with a focus on getting the initial band version of each song as close as possible to the finished thing. “

“It’s supposed to be very optimistic, even though it’s about a dark subject,” states Vanian. “As an artist, you can’t help but reflect the times, because that’s what art does. I think we always do it, but in a slightly different way. So a song like ‘Standing…’ may seem quite joyous and uplifting musically, but some of the lyrics might be about quite dark things. That’s what I’d like to think this album is – an uplifting album, not a moaning old album – not ‘this is terrible, and that’s terrible’, and then not offering any answers. It’s more a case of, ‘If we get it together, maybe we could change things a bit’.

The lyrical content of Evil Spirits doesn’t really come over as a call-to-arms or savage indictment of capitalism, more cliché-ridden bluster with a few buzz-words that hint at oblivion and the state we are in.  It’s all a bit too obvious and at the same time a bit too wishy-washy…. calling a song ‘Look Left’ could be taken as a hint to Vote Corbyn Maybe  but its probably more a road sign at a junction on the way to the studio which caught the lyricists eye….

Listen to Look Left on Spotify

A song about the biased and corrupt press and their malign affect on our lives ?  Lets call it… Daily Liar!  Genius. Lot of thought went into that.   We’re So Nice is a ludicrous title for a song  and is a clumsy 60’s psych pastishe with a grab-bag of clichés masquerading as protest-lyrical content.

As the Damned said in 1977’s musical dig at the Clash ‘Politics’ – you don’t need no politics to make us dance.  They seem to have forgotten this and want to be seen as Wise Elder Statesmen of Punk. They’ll be hanging out with Pope Bono next and going round to Billy Braggs for tea.   Getting the apparently very expensive Visconti in to add his magic touch also points to the fact they want to make a Classic (final?) Album and be recognized for their late-period musicianship and artistry.

Evil Spirits isn’t a bad album by any means.  Its a bold, brash, bombastic psychedelic album hovering on the borders of Rock and Pop but in thrall to the History of it all – from Joe Meek to John Barry to the Shadows, the Doors, Glam even Motown!

The song ‘Sonar Deceit’ is practically ‘You Can’t Hurry Love’ played by Hank Marvin… but in a good way!

Too many of the songs are marred by either Vanians insistence at attempting a Jim Morrisson bluesy growl instead of his velvety croon, or Sensible going all-Heavy Metal batshit-crazy trying to be Eric Clapton or Slash when he could keep it precise or subtly inventive.

The playing and production though is faultless. Paul Gray is a master of his art and Drummer Pinch is particularly superb. Even some of Susan Boyle lookalike Montys organ soloing, when he uses a Hammond-y sound, is excellent and fully integrated into the arrangements.  He spoils it by using a  really annoying parp-ing trumpet fanfare sound on the prog-protest of the Daily Liar.

There are three songs where the Damned seem to have inadvertently become the Stranglers (with guests Ian Astbury and Scott Walker!) playing Dark Muso Psychedelic pop rather than elegant Gothic or shiny post-punk.

Dave Vanian is in great voice when he uses his crooning voice to full effect – a sliding scale from whisper to bellow. It only gets in the spotlight during the first thirty seconds of Look Left and on closer  I Don’t Care, which ironically is the best track on the album; the one with a truly ‘Punk Rock’ sentiment and title.   It’s full-on Scott Walker sings Brel melodrama too.

The problem with Evil Spirits is that it seems to be a bit of a stylistic / artistic tussle between Vanian and his camp vamp 1950’s stylings – Rock’n’ Roll drama and Sensibles Prog-leaning Psych tendencies, supported by his mate Monty.  ( This may be just my taste, my preference; I loved Dave Vanians Phantom Chords…)

Evil Spirits is a reasonably good album which will satisfy the fans, but is too backward-looking, doesn’t take any risks and too much of a going for the sound of their biggest commercial-hits to be the artistic triumph which it could’ve been…. in my opinion.  They could’ve done anything they wanted…. but seem to have taken the safe, and ironically ‘sensible’ option.

All words by Ged Babey (…is a wanker – Comments are open, opinions are like arseholes…)

the print Louder Than War Magazine will NOT include this review. They will get an adult to do it.