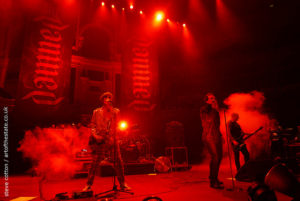 A perfect tribute to a unique band

‘But always remember, this is the happiest day of your life’. So sang Captain Sensible as he led the communal rendition of the musical self-help manual from 1982’s Strawberries and he may well have been right. Life Goes On started the second half of a marathon performance as The Damned celebrated their 40th anniversary at this iconic venue. Six thousand devotees had gathered to celebrate 40 years of their own lives spent in thrall to the legend of The Damned so it was always going to be one of our better days, with a host of memories and shared experiences alongside the soundtrack to our lives.

There’s so much we could say about the importance of this band, both to their legions of fans who had thronged up Kensington High Street to share the celebrations, and the niche of musical history they have carved out and that will forever be their own. Doctor from Dr and The Medics said as much in his introduction where he also reminded us that loving The Damned hasn’t always been easy as he had attended two farewell shows to date. However as Doctor left the stage, and the venue began to fill with swirls of dry ice, the opening bars of Nature’s Dark passion and Dave Vanian’s booming vocals rang out. Then, in a spectacular opening, the spotlight picked out Vanian in the Grand organ stall above the stage, suitably garbed as the Phantom of the Opera complete with mask and gown.

Having spent time trying to predict how The Damned would approach the set list, I’d sort of settled on an opening cavalry charge through the early punk classics, but when Vanian strides down from his lofty perch and leads us into Democracy and then Amen (with Cliff Richard getting his only name-check tonight) it becomes clear that we are going backwards chronologically. Grave Disorder, their second come-back album and a very good one too, provides us with Absinthe and Thrill Kill which enable Vanian to employ the full range of one of the best voices in rock – not that you’ll read that very often but it is a fact!
Captain Sensible, resplendent in a sparkling jacket, was comparatively subdued tonight, but considering how many tracks there were to pack in, it’s hardly surprising. Back we went into the overblown ‘80’s with two cover versions, the sumptuous Alone Again Or and the impossible to ignore Eloise. During the former, a trumpet player who we are assured is called Chris Coull, appears onstage and returns for Grimly Fiendish and a triumphant Twisted Nerve. The raucous Street of Dreams brought back memories of a conversation with Roman Jugg who assured me that the band really believed they were “haunted men”, with a poltergeist following them round. Who knows but maybe only the supernatural can explain why such a talented band, with such a loyal following can have been so shamefully excluded by mainstream media and the cognoscenti who still seem intent on delivering a Clash/Pistols diatribe about early Punk. Maybe the mass sing-along to Ignite could shake their ivory towers, but do we really care when all that matters is on the stage and around the building?
The second half took us further back and saw honourable mention of former bandmates and friends. Paul Gray with Generals, the late-Cold War classic he penned for Strawberries and Ruts frontman Malcom Owen (with Segs in the audience) is remembered with The Limit Club. The classics come thick and fast but for every Blackout, there’s a Jeckyll and Hyde and every Love Song a Feel The Pain. The Damned lyrically, musically and arrangement-wise have always been out on their own, pursuing a vision for the development of punk that shot way beyond what some would have you believe is the norm for the genre. Looking around The Royal Albert Hall tonight, a venue that banned them in 1977, it seems that there’s a lot of people that would agree.
Disco Man seems like it could be the highlight but then comes the macabre beauty of Plan 9 Channel 7 and the storming Second Time Around. For those in need of an energy shot the standard set closer of Smash It Up is delivered earlier and received riotously in what is fast turning into Punk’s answer to the Last Night of The Proms. Into 1977 we hurtle with first album classics One of the Two, Fan Club, See Her Tonite and Neat Neat Neat. Thanks go to Brian James without who none of us would be here and to Rat Scabies, “we love him really” says Captain. Only one song can finish the set and New Rose is as alive with frantic power as it ever has been as it brings proceedings to a manic conclusion.
The encore was to be the song that, more than any captures the true essence of The Damned; a song big enough to fill the Albert Hall – the rich, dark beauty of Curtain Call. The organ driven, booming masterpiece that ponders life’s fortunes; a package of subtlety, complexity and power with an other-worldly melody. It’s The Damned at their creative best defying convention and categorisations and, though they weren’t to know when they wrote it, possibly the perfect musical summary of their career. Midway through a young figure, clad in black angel wings, emerges from the wings to deliver the violin piece in the middle section. Crouched by the amps, her proud father watches on as Emily Vanian does the family proud and the set ends with Dave in a matching pair of wings leading the band through a bow and photo call.
A special night, a superb performance and a perfect tribute to a unique band. It was a journey through time for all of us, but we’re all still here and there will be more. The Damned are recording again and they tour throughout this year. We were the last to leave the building and were assisted by a security guard with a sideline in philosophy. “Life” he said as he locked the doors, “either you control it, or it will control you”. I’m not sure if he’s familiar with the career of the band who had shaken the building’s foundations earlier, but his words were uncanny. The Damned have spent 40 years wrestling with life through creative defiance – long may they prosper!

Thanks to Steve Cotton of Art of The State for photo –  www.artofthestate.co.uk