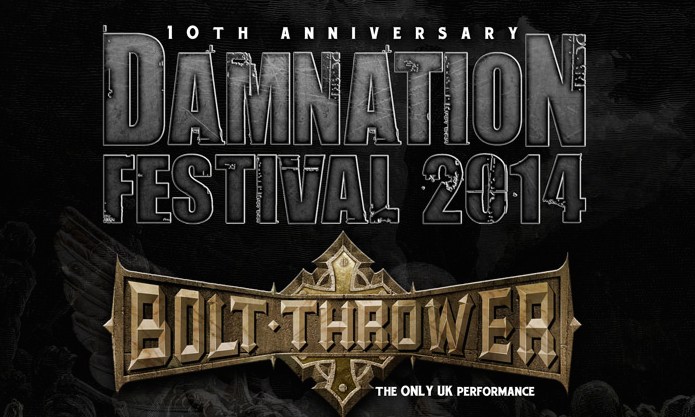 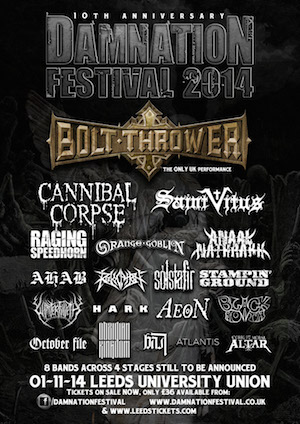 In a climate where the smaller independent festivals are seriously struggling, Damnation festival is quite contrary in the fact it is not only increasing in size every year but about to celebrate it’s 10th anniversary.

The Leeds-based annual knees-up of all things heavy and metallic takes place at the Leeds University Union on Saturday November 1st and as it’s the 10th outing of the festival, the organisers have once again put together a stellar line-up over the 4 stages.

In a massive coup, UK Death Metal titans Bolt Thrower are set to headline the main Jagermeister stage for a very rare and exclusive show on home soil.

Also appearing on the same stage will be US Doom legends Saint Vitus, stoner gods Orange Goblin and 2 bands that have previously destroyed Damnation in the past, the recently reformed Raging Speedhorn and UK Hardcore outfit, Stampin’ Ground.

Over on the Terrorizer stage, US Gorehounds and arguably one of THE biggest Death Metal bands on the planet, Cannibal Corpse, will be bringing a bloodsoaked headline set to the masses.

UK Black Metal visionaries Winterfylleth will be returning to Terrorizer stage for another highly anticipated set that will see material from their stunning forthcoming album ‘The Divination of Antiquity’ premiered.

A cloud of misanthropic blackened hatred will also descend on the Terrorizor stage in the shape of returning Damnation heroes, Anaal Nathrakh

Icelandic progressive metal outfit Solstafir are playing their debut UK festival show on the post-rock stage. This is the stage that tends to throw up the surprises of the day and all the bands playing will leave with new fans.

Downstairs, German Doom heavyweights Ahab will be not only headlining and playing their first UK show outside London but like the festival, will also be celebrating their 10th anniversary.

The full list of bands announced so far for Damnation is as follows:

Damnation is most certainly a major highlight of the UK Metal calendar and the fact that it keeps on growing every year is testament to the organisers of the festival and to the loyalty of the fans who have supported the festival since it’s inception all those years ago in Manchester.

Not only that, it’s a great day out with a fantastic communal and friendly atmosphere, and the slight matter some of the finest bands you’ll ever see assembled under one roof!

So, grab a pint, raise your horns and I’ll see you down the front for Winterfyleth!!

Tickets for the event can be found here, priced £36 … damnationfestival.co.uk/tickets

For further information on the festival and all the bands playing, head over to damnationfestival.co.uk/news.