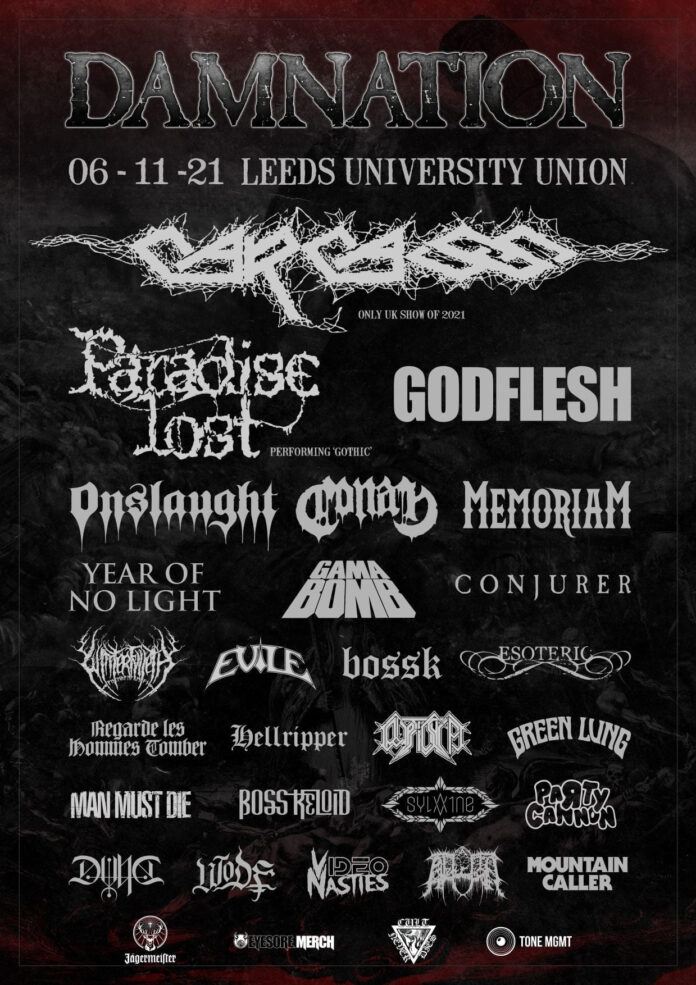 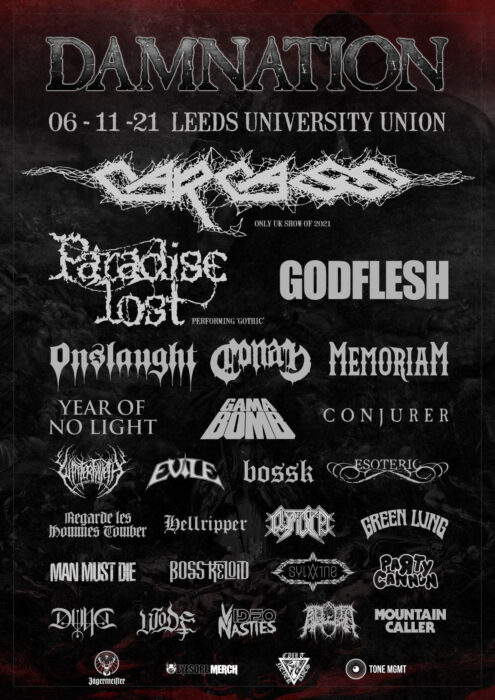 Damnation Festival, taking place at the Leeds University Union, is a much-loved annual feature in the metal calendar, and makes a welcome return next month.

The first Damnation took place in Manchester in 2005, and has since become an important metal festival, showcasing a wide range of metal genres with an international emphasis. If you like edgy, experimental, atmospheric, full on metal, and great musicianship, Damnation is the festival for you.

This year, Damnation again sold out well in advance, although at the time of writing tickets still seem to be available for the pre-show A Night Of Salvation on 5th November. The pre-show will feature special sets by Orange Goblin, Raging Speedhorn, Svalbard, and the simply amazing Akercocke, playing a 20th anniversary of The Goat Of Mendes set.

This will be the first Damnation Festival since 2019, and poignantly the last at the Leeds University Union. In 2022, Damnation will move to the BEC Arena, Manchester, allowing for a greater 6,000 capacity and a much-enhanced festival experience. This will enable Damnation to become the biggest in-door metal festival in Europe. The excellent line up already announced for 2022 includes Ministry, Converge, thrash metal legends Destruction, and the progressive metal of the not to be missed Elder, to name just a few of the bands announced.

For 2021’s Damnation, there are so many musical and performance highlights to anticipate. To mention just a few of these, don’t miss Bossk on the Jägermeister stage. Their music connects a melodic post-metal sound, with a doom metal underpinning, which creates a very immersive experience live. Their stunning 2021 album Migration adds electronics into the mix, and it will be intriguing to see how they integrate this into their live set.

Carcass previously headlined Damnation Festival back in 2013, following the reformation of the band and the release of the great Surgical Steel album. They make a welcome return to Damnation in 2021, to headline on the Jägermeister stage. New album Torn Arteries demonstrates there has been no let up in the band’s crushing and melodic take on death metal.

Godflesh and Paradise Lost precede Carcass on the Jägermeister stage. Godflesh, comprising the musical duo of Justin Broadrick and G. C. Green, play an intense form of industrial metal that has a completely irresistible funk back beat. This reviewer was lucky enough to see Godflesh headline the Sophie Lancaster stage at the 2015 Bloodstock Festival, where the audience danced through the whole set as if Godflesh had quite wonderfully morphed into a metal Funkadelic. Paradise Lost, with their creative and eclectic mix of doom, death and gothic metal styles, will be performing the Gothic album in its entirety, on the 30th anniversary of its release and on their home ground of Yorkshire. This will be a unique opportunity to see the band perform one of their most iconic and important albums.

Scotland’s very own Party Cannon, on the Tone MGMT stage, should conquer all with their exciting slam version of death metal, together with their completely danceable breakdowns. The resultant pits will certainly not be for the faint-hearted. In complete contrast, look out for Sylvaine, from Oslo, Norway, on the Eyesore Merch stage. The multi-instrumentalist produces the most engaging soundscapes, that can range from soaring post-metal to gentle solo piano accompanied pieces.

Watch the live performance of Abeyance from the album Atoms Aligned, Coming Undone, recorded in Paris in 2019:

The return of Damnation Festival this year will be a celebration of all that is inspiring and captivating about metal music, and the move to Manchester in 2022 will mark the end of an era. We can’t wait for the metal avalanche to begin.