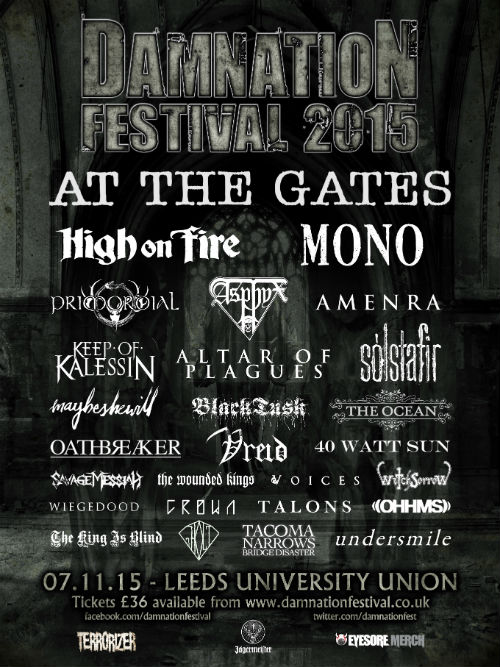 This Saturday (November 7th) sees Leeds University open its doors once again for the 11th installment of what has become a major event on the metal calendar, Damnation Festival returns!

Headlining the Main Jagermeister Music stage are Sweden’s melodic death metal titans, At The Gates. The band have spent most of this year extensively touring and even played a mainstage slot at this year’s Download festival. A band not to be missed. Also appearing on the Jagermeister stage are High on Fire and Solstafir among many others.

Over on the Terrorizer stage, Celtic metallers Primordial will top a bill of the finest death/black metal you could hope for. Other highlights playing on this stage will be Voices who will bring  a truly disturbing exhibition of urban horror and epic Norwegians Keep of Kalessin to name but two.

The Eye Sore post rock/metal stage is proud to host Japan’s Mono and Amenra in the top positions with the return of Irish black metal legends, Altar of Plagues, who will be unmissable.

For fans of the crushingly heavy, the Electric Amphetamine stage will be where it’s at. 40 Watt Sun and The Wounded Kings topping that bill.

This is the briefest of tastes of what is in store, feast your eyes on the stage times and full line up poster for what other heavy delights are on offer.

In response to criticism from fans about overcrowding and the difficulties in moving between stages at last year’s event, the organisers have made the decision to reduce capacity by 1,000 this year. A fine example of putting the fans before profit and one that should be applauded. In addition to this, they have also negotiated special rates for drinks at this year’s event!

Another regular fixture of Damnation returns in the form of Deli Kate and the infamous ‘Damnation Burger’.

So, as far as I can see, that’s all angles covered for a magnificent day out. Spectacular bands, cheap beer and a surplus of meat. What more could you possibly want?

Raise a beer, throw the horns and I’ll see you there! 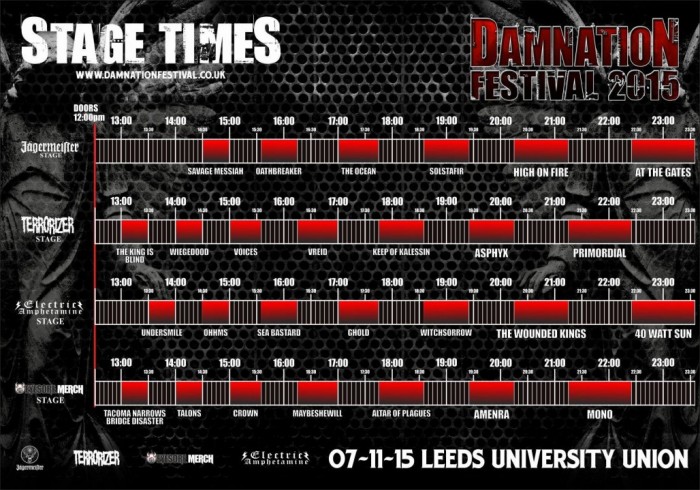 Tickets for this year’s festival are still available here.