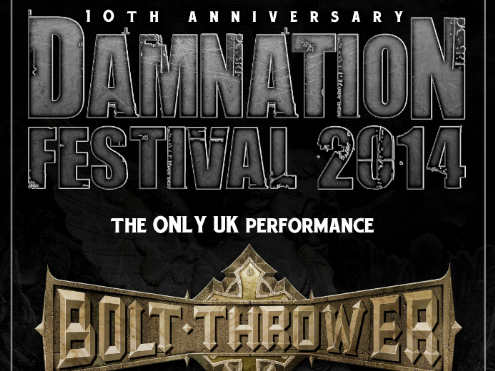 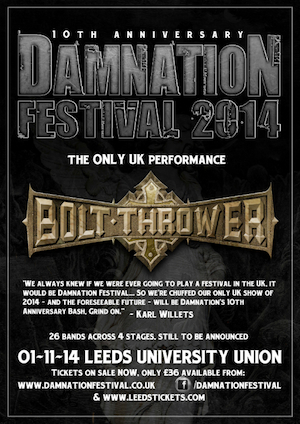 On the 11th of November Leeds University Union will play host once again to the UK’s premier indoor Metal festival, Damnation Festival.

Damnation festival is upon us and this time it’s the 10th anniversary!

From the humble beginnings at Jilly’s Rockworld in Manchester to the altogether grander surroundings of Leeds University Union, Damnation has gone from strength to strength over the years and has now cemented its place as one of the year’s highlights for all fans of metal in its varying forms.

So what of this year’s event? A 10 year anniversary is a landmark by anyone’s standards and the organisers will be going all out to bring the finest bands possible over the four stages at the festival. So far, only one band has been announced and that is the band that will headline the Jagermeister stage. In a UK exclusive Coventry’s legendary Death Metallers, Bolt Thrower will play their first UK show since 2012 and their last one “for the foreseeable future” and this one-off performance will be the first time the band have ever agreed to play a festival on home soil.

Frontman Karl Willets had this to say on the subject of the forthcoming headline appearance:

“Well, we always knew if we were ever ever going to play a festival in the UK, it would be Damnation Festival; as we’ve only heard good things about it from mates who’ve been, and other bands who’ve played it.
“So we’re chuffed our only UK show of 2014 – and the foreseeable future – will be Damnation’s 10th Anniversary Bash… Grind on.”

On the strength of that one booking alone Damnation 2014 is set to be a massive event and with another 26 bands still to be announced, things can only get much bigger.

Below: Bolt Thrower at Hellfest 2011:

Tickets are available now from damnationfestival.co.uk, leedstickets.com or Facebook and are priced at a mere £36, that’s amazing value for money.