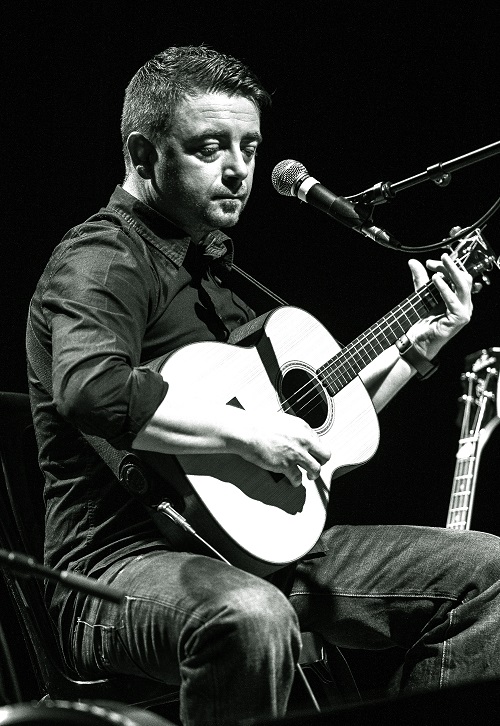 St Patrick’s Day, an Irish double bill and the potential for some of  the black stuff to have been going down and we don’t mean the local Bury black pudding. Actually, as usual at Bury Met, it was all very civilised although the stars on stage in the Damien O’Kane Trio had a beano whipping up a bit of a banjo and guitar powered storm. 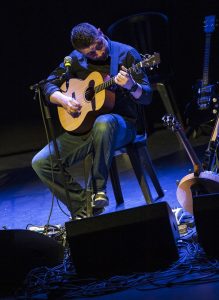 In times gone by, some may have found a little mileage finding fault  with four people making up the Damien O’Kane Trio. Trades Descriptions Act,  yes?  No –one noticed, or at least dared to mention anything, although you simply cannot begrudge the guest appearance of a certain Manchester bodhran player in John Joe Kelly being added to the trio which includes Stevie Byrnes on acoustic guitar and the cascade of tones and colours seeping from Steven Iveson’s electric guitar that provide an interesting hybrid which takes their folk rooted music into the beyond. Oh, not forgetting there’s the man himself holding court centre stage with the tenor guitars and trademark banjo and an understated vocal.

In their latest incarnation the band (one which maintains a fluid line up) heading back towards a more stripped back and organic version of  what he does best after the developing a more band polish of (another) Folk Award 2015 nominated album Areas Of High Traffic. The development of his sound, one which has played a significant part in  influencing the Kate Rusby sonic palette, is a subtle reminder that folk music continues to shift its boundaries whilst remaining very much rooted in the traditional. Not quite the Judas like magnitude of Dylan circa ’66, but turning the volume up and combining acoustic instruments with, shock horror, guitar pedal boards, is what makes the future and indeed the here and now, exciting.

Sitting intensely through a set which plucked samples from the solo canon including some interesting variants on the Areas Of High Traffic material – the theme of migration, ever topical, ran strong. The gorgeous Banks Of The Bann showcased the echoing black electric tenor guitar which looks a beast yet appearances can be deceptive. It makes up for the fact that the duet with Kate Rusby on record would only surface live when the tour hit Barnsley.

Having said that, the presence of John Joe’s bodrhan crack makes a heck of a difference to the sound of the band, as does any percussive accompaniment in the folk world although he may have perhaps not have been quite as frenetic as he often is, the emphasis overall on a more subtle mood. On the other hand, the highlight of any Damien O’Kane set has to be The Breaking Of Omagh Jail – a three minute play it safe recorded version  which appears on 2010’s debut Summer Hill, has taken on the mantle in concert of a driving tour de force. It begs the question of how can you play this stuff sat down? With P Stands For Paddy a throwback from childhood, it rounded up an evening whose thread could well have been a journey through the O’Kane book of memories, influences and inspirations.

Setting up the evening,  triple Folk Award 2017 nominee Daoiri Farell – and wouldn’t you be a bit miffed if out of the three you didn’t win one – even managed to get the usually refined Met crowd singing a genteel  “boozing, bloody well boozing” refrain early enough into his set to relax the vibe.  Nice – considering the date and like the name of his current album, he is the epitome of a true born Irishman. While the awards committee may consider Daoiri as flavour of the month, you can appreciate why his confident and strident delivery portraying  a robust Irish value has those in the know sitting up to take notice. A brilliant double bill;  both artists complementing each other perfectly, their comradeship seeing them join forces for a final blast. Folk awards, nominations or whatever, the force is still strong.