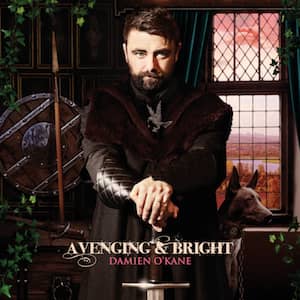 Just over two years since the release of the startling contemporary folk of Areas Of High Traffic, Damien O’Kane and his crack, well-oiled band are back , avenging and bright, with an album that once again dares to challenge any preconceptions of folk music.

Damien O’Kane is a musician who’s well versed in the tradition yet the twinkle in his Irish eyes tells you to be on yer toes. While Areas Of High Traffic might have been an album that threw a spanner in the folk works – the unexpectedly huge swing from what the folk world expected from an acclaimed banjo maestro – it’s daring sonic explorations gave a hint, a pre-warning, to expect the unexpected.

Hence, there’s an uncertainty at how he might follow Areas… As they used to say in Thunderbirds, “anything could happen (in the next half hour)” with the caveat that it probably will. For a start, there’s the cover that shows Damien boldly playing the role of the gallant hero knight in bird crested fur robes, shield and sword by his side; ready to head into battle to uphold his beliefs. Or maybe he just likes dressing up, as several very convincing appearances as Mary in the nativity encore of Kate Rusby’s current Christmas tour will testify.

An indication of the contents maybe? Armed and ready, he’s flanked by his guard, his merry men, his boys: Steven Iveson the sonic architect whose electric guitar has decorated the O’Kane and Rusby live and studio bands in the past as has Stevie Byrnes; the perfect foil, switching between acoustic instruments to complement with a rare empathy. And then there’s Anthony Davies summoning up very un-folky swathes of keyboard nuances. The O’Kane/Davies/Byrnes/Iveson line up certainly make a formidable five-a-side team with Josh Clark stepping up on drums, percussion and assorted kitchen implements (probably something like Stewart Copeland tapping out a rhythm on a rocket on Walking On The Moon).

Beneath the robes, we can only guess, yet what Avenging & Bright does is further reinforce his capacity and his reputation as a tunesmith. Irish sources play a major role, while once again, the overarching musical vibe is about expanding the contemporary approach. Setting the tone with Boston City which flows along on a mellow groove before being ambushed and driven by a raging banjo fire, Poor Stranger similarly revisits some of the sonic lushness from Areas… The Irish origins of the opening volley all come flavoured with the O’Kane touch as the lyrical themes of the quest for liberty and freedom come to a head in the title track.

The double electric tenor guitar with Stevie Byrnes on Lately, donated by Kate Rusby, carries a gentle rolling song that muses over the passage of time, completed with a distant breathy Rusby backing vocal before a run of covers that include Elizabeth Stirling’s All Among The Barley and January Man by Dave Goulder. However, it’s Sean McBride’s The Homes Of Donegal though that emerges as a choice pick, carried by a passion and a deep sentiment.

No Damien O’Kane album would be complete without a couple of tunes – the traditional Castle Kelly’s and the original Dancing In Puddles come from different inspirations, the latter featuring the amazing Ron Block and a more lilting tune you’re unlikely to hear. Measured and reassuring it’s another fine example of taking the tenor guitar and tenor banjo in a different direction. Duelling banjos but with a twist. A tune that endorses the view on Avenging & Bright, it’s hard to imagine we’re working with traditional folk songs here. What someone might call folk Jim, but not as we know it. Not quite a walk on the wild side, but certainly out there.

He is also on Facebook  and tweets  as @DeeOKaneBanjO