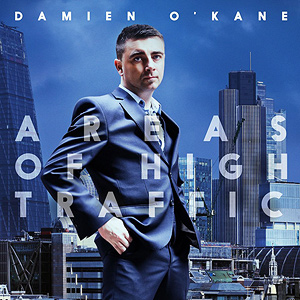 Pure Records is proud to release – the third solo album from the other half of their flagship artist. Sounds a bit cryptic but Damien O’Kane, to his credit, is more often than not associated with his work as producer, arranger,  guitarist/banjo player and husband (if that’s classed as work) of folk music icon Kate Rusby. He occasionally does his own thing too.

Damien’s first two albums ably demonstrated two sides of the same coin. While his 2010 debut, ‘Summer Hill’ focussed more on songs, the follow up recorded a year later with David Kosky and titled ‘The Mystery Inch’  (and I still haven’t worked out what it is despite the apparent clues on  the album cover, yet suspect it may be something a bit saucy) showcased his instrumental prowess with a cluster of tunes and sets to tear through with banjo and guitar.

And while we’re on the subject of album covers,  a first glance ‘Areas Of High Traffic’ may remind observers with wider musical tastes of the Hipgnosis sleeve for Yes’ 1977 ‘Going For The One’ – all gleaming towers disappearing into the sky, but instead of the butt naked guy on the Yes album, you get Damien, dressed in a sharp suit and freshly barbered. Enough of a clue to suggest this is a contemporary new vision and style yet cut very much from the same cloth and very much worth the wait for new product.

Given the shift in image in the packaging, anyone expecting more of the same might  have a pleasant surprise, shock even, on a first play through. Damien often refers to himself as a tunesmith, which is exactly what he does here yet it’s a long way from the rootsy trio he often plays in accompanied by John Joe Kelly and Ed Boyd. In fact while John Joe might not be on the album (chorus of boos and sighs) the percussion is handled by Cormac Byrne (large cheer) – it’s akin to  keeping Lionel Messi on the subs bench. Add the significant impact of Steve Iveson’s electric guitar which is let loose with all sorts of textures and gives the collection of songs a distinctively modern coating. Anthony Davis brings his  keyboards along, contributing another concession to modern edge.

Then of course, there’s Damien’s rich Northern Irish brogue  –  a classic example of how folk singers rely on their accents to carry the authenticity of a song. All combine to bring a unique take on a set of songs which are collected from traditional sources  and given a shiny new interpretation. When he sings of ‘a new tune to learn’ in opening song ‘’Til Next Market Day’, he points out the ambiguity of the word  ‘tune’  – after all it is a folk song and needs some smut but it sets the bar for what’s about to follow and the song sets the scene for a journey which is part travelogue, part nostalgia with an, at times, deeply personal perspective.

He’s described ‘The Blacksmith’ and ‘I Am A Youth’ as iconic or as classic  – so much so that he’s seen that as a good enough reason to leave them be – until now. The former is a perfect example of Iveson’s cascading guitar notes laying down the sort of pattern that you might associate with someone like Robert Fripp and the first indication that the musical style is far from the expected. It almost verges on funk at times, and followed by the brooding presence and smooth sleaze of ‘Maid At Seventeen’ which builds to a pacey close – hard to imagine that we’re working with traditional folk songs here.

The closest things come to something sounding akin to a traditional folk tune is the ‘Close Of An Irish Day’, a song which carries the strong lyrical theme of the album.  Naturally, it’s not as you’d expect – again, bubbling percussive strings and vocal echoes with Cormac Byrne’s innovative percussion move the song into another dimension – indeed there’s a rare groove not often associated with the genre which is at its strongest here but is also a feature of how the musicians work together.

Some might grumble that there’s not  enough of Damien’s  trademark banjo and as a concession he lets rip on ‘The Goddaughter – part 1’, where Iveson’s Frippertronics soon give way to the familiar O’Kane banjo pick and pluck – just a reminder of Damien doing what he does best  and it’s akin to  welcoming an old friend who’s not been round a while. Let’s face it, if you see Led Zeppelin, you want them to play ‘Stairway’ don’t  you, yet for all the twists and turns, the highlights come in the form of a couple of lower key numbers.

‘Banks Of The Bann’ he’s been playing for a while but the recorded version in the new band guise is a revelation. It features a subtle guest vocal from Kate Rusby and along with ‘Don’t Let Me Come Home A Stranger’ forms a stunning pairing which are the core of the album lyrically and in their sentiment.  You feel that Damien has a real empathy in delivering the lyric to both and he absolutely nails them. The latter song was bought to the table  by Kate and the one real contemporary song on the album (by Robin Williams and Jerome Clark) is indeed one which would suit her as well  – in fact, here’s a marketing ploy – an EP with the ‘joint’ version, and then two tracks of Damien and Kate each doing a solo version; Kate’s with a nice bit of that brass backing that she tends to favour now and again.

‘Areas Of High Traffic’ takes a new direction in which  the studio polish and arrangements and stellar performances are key factors yet at the core of the album Damien O’Kane remains embedded firmly in his roots.

Promo film for ‘Close Of An Irish Day’:

Watch Damien talking about  the album: