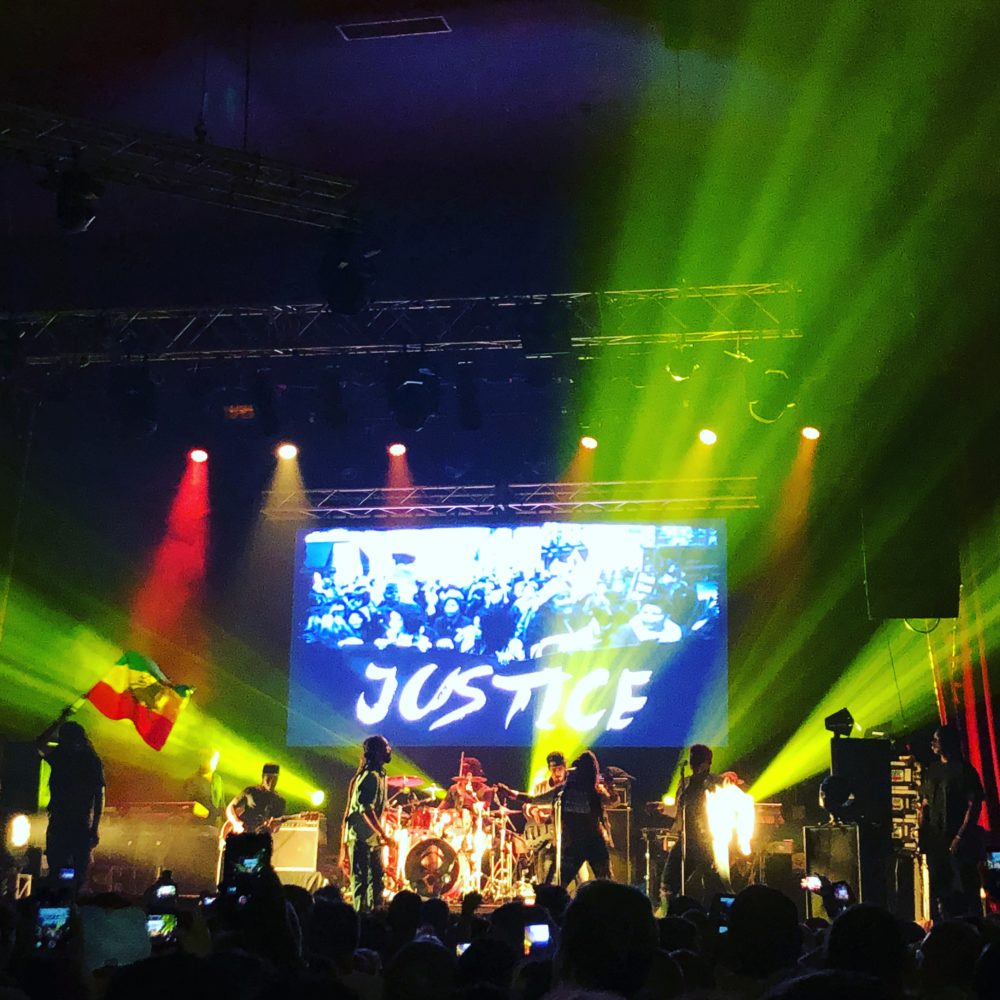 Damian ‘Jr Gong’ Marley has been releasing his own music for many a year. He has collaborated with a wide range of people, and brought his own distinct style to roots reggae music which has thrown in more hip hop influences and many other sub styles.

It felt apt that the UK was in the hold of a heatwave – Jr. Gong and his band from more tropical climes would have felt at home in arguably Manchester’s worst air conditioned venue! The Ritz was a complete sweatbox of good vibes and positivity. With the football being a dead rubber, there were no distractions keeping up with scores and all eyes were on the charistmatic Damian Marley and his incredible band.

Marley’s banned sloped onstage in true laid back fashion and entered into an intro jam before the heftily dreadlocked Marley strode onstage to rapturous applause. It was clear from the get-go that the musicians in the band were impecabble; their precise musicianship was delivered with aplomb against colourful backdrops of films about Rastafarians, civil unrest and protest, justice and thoughts of Zion. There was also a dedicated flag waver who ensured that the Lion of Judah looked over every note that was played.

The whole crowd, no matter what their temperature, were all in, for every song. New songs from 2017’s Stony Hill went down a storm, especially the lead single, Medication. It’s overtones and pre song introduction about the legalisation of marijuana is a cause that Marley has lent his voice to a lot. The more orthodox reggae style of the song helped mix up the styles between the more ragga and dancehall type tracks.

Welcome To Jamrock and older cuts from Marley’s 2006 album were greeted like old friends. The crowd swayed jubilantly and belted every chorus back with vigour. Peaceful protest and the fight for whatever justice you seek were themes throughout; the entire show felt like a feel good rally. The power of positivity was rife.

Harder tracks from Marley’s catalogue of songs veer on the edge of angry (and they need to be sometimes), but the backing singers and their wonderful harmonies ensured that the vibes remained blissed out. Although astoundingly tight, the band played with a looseness and fun that you’d expect from such a high quality band.

Damian Marley could easily rest on his laurels and plunder his dad’s legacy – he doesn’t need to. He has his own unique voice both metaphorically and literally. He also has a great collection of songs that will please anyone that goes to see him and his band.