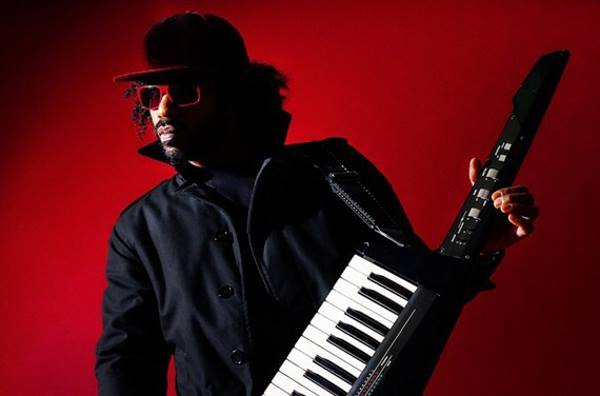 On a rare sojourn over the pond, DâM-Funk more than pleased a sold out Soup Kitchen in Manchester.

The L.A. producer, creator, collaborator and DJ turned up the heat in Manchester with a wonderful array of musical gems, as well as choice cuts from his own back catalogue. Taking the stage decked out in orange shades, DâM-Funk  delivered what would be half DJ set / half live concert.

As the beats began, DâM-Funk took the microphone and immediately showcased his superbly soulful voice on Mirrors off his 2009 album, Toeachizown. As he sang the track, the passion that he injected into the synth funk track was clear to see. Mid through the set, I Wanna Thank You (For Steppin Into My Life) was delivered with the same vigour. In a venue that is very intimate, you could see how DâM-Funk was feeling every single word.

Throughout the evening, DâM-Funk took his position behind the decks to showcase some fine records for the adoring, and incredibly danceable crowd. Nods to Larry Heard, Junie Morrison, Funkadelic, Omar S and the sadly still missed Prince made up a playlist to die for.

Funk standards are well and good, but DâM-Funk showed his class behind the decks moving from Detroit house and techno, to New York funk, to Mancunian Acid House – playing 808 State in Manchester was a master stroke, although I’m not sure too many of the younger audience (myself included) would have memories of dancing to it at the Hacienda! Keeping it local, Children of Zeus, were also given a nod from the stage as they were in attendance in the intimate surroundings of Soup Kitchen.

As another live portion of the set was started, DâM-Funk took to his keytar to show some more of his abundant musical class. His prowling of the front of the stage, allowing people to play his instrument with him, and taking selfies with audience members showed that the love in the room was completely mutual.

Back on the decks, DâM-Funk introduced each record like it was the greatest song ever written. Grinning wildly, he held up sleeves, announced record labels, years of release and delighted in watching the audience dance. Cuts from Southern Freeez, Rick James and selections from West End Records all ensured that the room was full of love. The way in which DâM-Funk mixed genres was spectacular and executed in a way that didn’t disrupt the flow or vibe of the set.

The show ended with DâM-Funk in the crowd singing to the crowd on the floor – it was just like being at a house party with a bunch of mates, all completely sold on every note and groove; just pure appreciation. If you get the chance to see DâM-Funk anywhere in the world, do not hesitate to see a true pioneer of progressive funk, not having his head turned in any way…he is staying true to his roots.

DâM-Funk has recently released an instrumental EP called Architecture II. You can check it out here. If you want a slice of his DJ prowess, check out his DJ Kicks mix – it’s a funky education.