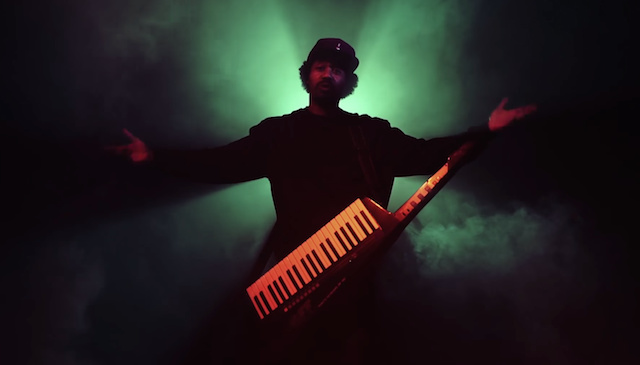 LA’s king of funk returns to Bristol with his three-piece band for a late night showcase of inspiring synth solos and disco-tinged bangers. Louder Than War’s Nick Canessa was there and threw some shapes.

The clock has struck eleven. As we leave the sizeable confines of Colston Hall’s main room having just caught a staggeringly bleak albeit incredible performance from Godspeed You! Black Emperor, there’s only one man that can brighten our Friday night blues…

Damon Garrett Riddick, better known by his exuberant stage name of Dâm-Funk, has kicked up a storm lately. His latest release on Stones Throw Records, Invite the Light – a 90-minute odyssey of luscious synth grooves and a voice possessing the heart and soul of a modern-day James Brown – has brought about a wider sense of scope while propelling his fanbase to soaring new heights. Returning to Bristol, the funk ambassador reigns supreme in a playful performance of tight musicianship, cooler-than-cool keytar solos and an endearingly affable stage presence with a few good laughs along the way.

Arriving onstage to the sound of pitch-shifted surveillance intercoms and police sirens before breaking into Invite the Light’s lead single ‘We Continue’, it’s a lukewarm start to proceedings as the masses shamble and talk between themselves mindlessly. Dâm-Funk knows it. “Freeze!” he utters as his band grinds to a halt. Within seconds, the energy skyrockets as he kicks into ‘Surveillance Escape’, an ecstatic instrumental jam pairing up his intercom-themed introduction with an irresistibly catchy, Southern-flavoured keyboard melody. All eyes are on Funk, and nothing can stop him – not even the niggling monitor pops that permeate his set can throw him off. From this point on, it’s all systems go.

‘Hood Pass Intact’ has arms flailing to its propulsive G-funk rhythm and sub-heavy bass kicks while ‘Floating on Air’ embraces a heavenly chord progression and airy vocals amidst descending basslines and a jazzy drum section, however it’s ‘Don’t Go Swag’ that makes for the most heartfelt and sincerely delivered number of the evening. “Don’t go swag, just stay cool. Don’t go swag, just be you” declares Funk. This simple, sweet message perfectly sums up everything this man’s about – peace, love, unity and staying true to one’s self. As the night draws to a close, that lyric springs to mind again and again, bringing forth a smile. Dâm-Funk didn’t just put on a party; he put on a show so life-affirming, it heightened the spirits of everyone in attendance. Stay cool, Riddick.