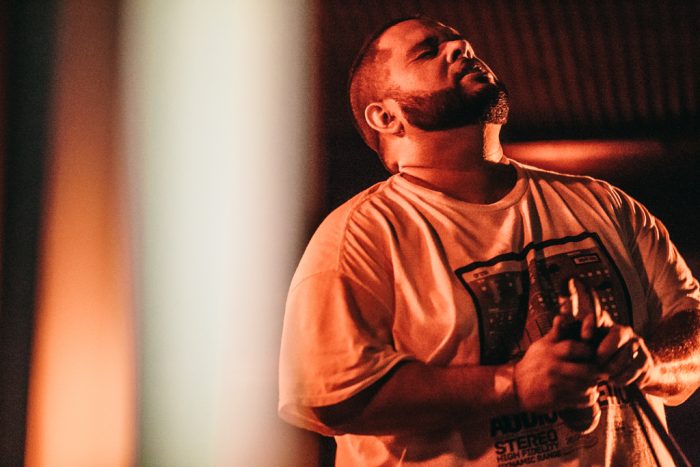 New Jersey’s Dälek reformed last year after a hiatus of around 7 years, which, to those of us who love them, has seemed like an awfully long time. Their masterful blend of noise, shoegaze and politically charged rap had, from their mainly instrumental 1998 debut ‘Negro Necro Nekros’, through their breakthrough ‘From Filthy Tongues of Gods and Griots’ in 2002, to ‘Absence’ (2005), ‘Abandoned Language’ (2007) and ‘Gutter Tactics’ (2009), consistently challenged perceptions of what rap music is with their use of soundscapes, beats and vocals so low in the mix that it was often difficult to hear what Will Brooks, AKA MC Dälek, was even saying behind the wall of noise created by Oktopus and Dälek, as co-producer. Dig deeper and you’d find that this is a fiercely intelligent, widely-read MC with a social conscience that reaches far beyond those of the majority of his contemporaries. Their range of musical influences range from the punishing industrial noise of Einstürzende Neubauten, My Bloody Valentine’s lush textures, via Joy Division, and Public Enemy’s production behemoths, The Bomb Squad.

As if proof were needed of their wide-ranging appeal, Dälek have played with such varied bands as GODFLESH, De La Soul, The Bug, Melvins, ISIS, Tool, The Pharcyde, The Young Gods…the list goes on.

Brooks had been experimenting, playing some Dälek tracks live, and approached Oktopus about getting Dälek back together. Oktopus had moved to Berlin and on to other projects, so wasn’t down with it, but gave Will his blessing to revive the project. And so Will turned to erstwhile collaborator Mike Manteca, of Destructo Swarmbots, and the outfit’s original turntablist, DJ rEK (Rudy Chicata), and lo, Dälek rose from the flames.

All of this led to this year’s triumphant return, ‘Asphalt For Eden’, which was released on Canadian label Profound Lore, more renowned for their extreme metal releases than experimental hip-hop. However, Dälek is still a perfect fit. Next April will see them become the first ever hip-hop act to play the incredible Roadburn festival in Tilburg, The Netherlands, cementing once more their crossover appeal, Roadburn historically featuring primarily a very heavy metal line-up.

They’re also an incredible live act, melding all of their skills into a formidable, in-your-face show that leaves attendees reeling. Ironically, between songs, Will is a man of few words, but no matter, when he’s got so much to say during them. Excitingly, this month sees Dälek embark on a short tour of the UK, playing Bristol, Glasgow, Dublin, London and Manchester, before hopping over to Brussels for a one-off (for the time being) European show.

BREAKING! – As I write this preview, on US Election Day, Dälek have released a new single, ‘Molten’, which is typically incendiary, and can be found here – https://soundcloud.com/deadverserecordings/molten