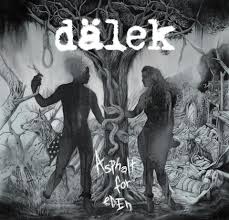 So it has been seven years since Dälek’s last opus, Gutter Tactics. In that time the experimental hip-hop trio disbanded and then reformed with the new line up of MC Dälek, DJ rEK, and Mike Swarmobts. Hailed for their melding of hip-hop beats and avant-garde sonics and incendiary live performances, Dälek are back and show absolutely no sign of retreating onto well trodden paths or resting on laurels.

Over its seven tracks Asphalt For Eden weighs down heavily on the shoulders of the listener. It is a sonic slab of musique concrete that pummels and warps but without loosing any melodic sensibilities making for an intoxicating listen.

A clarion call to arms the lyrical themes on this album are made plain with track titles such as ‘Guaranteed Struggle’, ‘Control’, ‘Critical’, and ‘Shattered’ but without resorting to lazy sloganeering. MC Dälek’s flo throughout is measured and on point, sometimes slow and measured other times quicker and full of rage with each target of his ire getting shot right between the eyes with pinpoint precision. It is a testament to the production on the album that even though the vocals are deep in the mix they can be heard clearly when needed to and submerged into the darkness when the time calls.

Make no mistake, this is a heavy listen with the brooding menace of Guaranteed Struggle and Masked Laughter (Nothing’s Left) being the choice cuts here however if you were to strip away all the dense layering of feedback and swirling majesty you fill find the heart of a classic blues album especially on the latter which manages to mix Sun O))) with Leadbelly creating a most modern, stinging love song.

Dälek are clever enough to know when and where to switch tempos in the album and that moment comes with the instrumental 6dB but even though the tempo is slowed the effect is never diminished and when we get the introduction of a piano line that runs through the dub thump we are presented with an extraordinary piece of modern protest music.

Mood changes also occur on the closing track It Just Is which is hymnal in presentation but which contains lines of instrumentation that swirl and stab with deadly efficiency.

With Asphalt For Eden Dälek have created an album that will poured over all year. An incredibly strong statement that will hover at the top of those lists that we all create at the end of year. A tour de force of an album that further cements the bands place in the elite league of hip-hop artists that are still taking this art form further and further into the stratosphere.