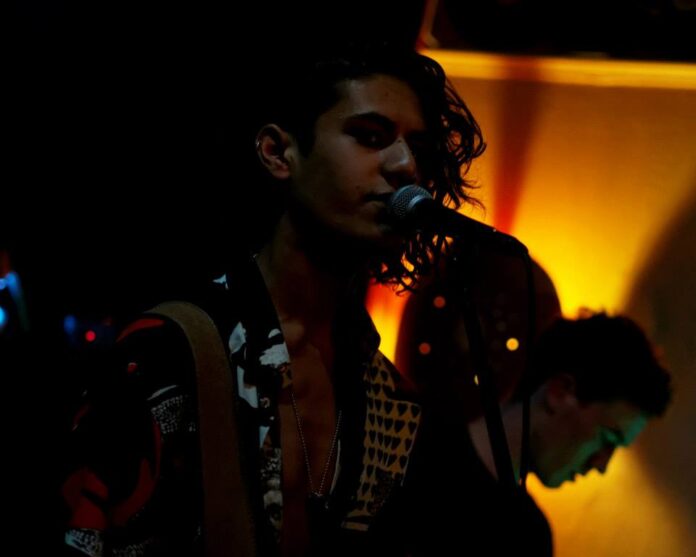 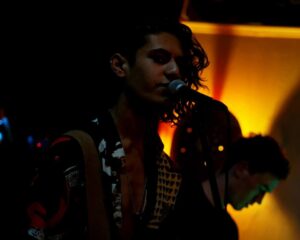 Ged Babey has introduced us to ‘the Disco Manics’ before.  We reviewed them here. But as they release their proper debut EP comes shock news about the line-up and a video which may cause some controversy.

Lymington is on the South Coast near to the New Forest. It’s a nice, quiet, out-of-the-way place. Ideal to retire to. Not a great place to be a teenager looking for kicks though.  And if you are kinda camp-looking and Anglo-Asian then its gonna be even more difficult to fit in.   So you travel to the nearest big city with your band -and its full of macho twats and people who think they should’ve been contenders.

Brandon Toor was the lead singer of Daisy Chains…. the songwriter, rhythm guitarist, lyricist.. and now he IS Daisy Chains.

It’s not that he’s sacked the rest of them or anything melodramatic. They are still friends but…

“Since Prince and Bowie died I just thought ‘fuck it’-  so I’m moving to London and it’s better that I do it alone.”

Hence the reason the video just features Brandon. Despite sounding like a ‘feel-good hit-of-the-summer’ type of song Honey is more complex and contradictory.  The lyrics have that way of not scanning on paper in the same way as Richie from the Manics didn’t.  The feel, more important than the grammar.

We’re as old as the wine we stole and always too young to drink it down, happy for a night, I will never know what I want…..

…fake smiles in the sunlight, when the time’s right, middle finger to the world, like the kid I am

And then there are phrases that are flash-framed up, just long enough for you to read them. They are vicious, bigoted abuse and hit you like electric shocks. I told Brandon I found it shocking to see ‘the P-word’, which was in everyday usage when I was a kid, in there. Proving that times and attitudes had definitely changed. Haven’t they?

“When I go clubbing, you’ll be so surprised how people act towards anyone a bit out of the ordinary, after 1 AM in the city centre…”

I asked if he wasn’t just courting controversy?

“In terms of the video, I’m worried people won’t understand that I’m completely tearing myself apart on purpose regarding the racist remarks, just so that it contrasts with the shots of me being myself, being ‘happy’ (in a sense) and miming along to a song about Youth and Loneliness.

Azealia Banks’ racist attack on Zayn Malik and the public backlash that followed resonated with me (and I imagine many like me) due to the fact that this isn’t the first time we have seen remarks like this, and it probably won’t be the last, I have had comments like this before, and the fact that I find myself being quite an androgynous being only makes it worse and harder, this video is about being yourself and not apologizing for it.”

Honey is just one of four songs on Daisy Chains ‘Introducing…’ EP.  Drug Pop, Lust, Stay Young are the others.  They are all equally good. Fresh, funky, intelligent and danceable.    Brandon Toor, under whichever name, he uses in the future, his own or the band name, is one of the most articulate, driven and determined, aspiring artists I’ve ever met.

Buy the EP on I-Tunes

Buy the EP on Spotify