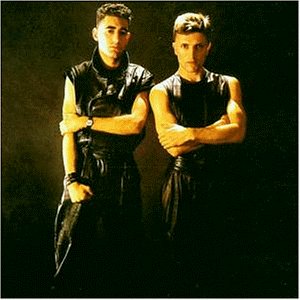 Pushing through the market stalls at Nocturnal Culture Nights, a small festival held in a wood near Leipzig, there is an opening in the trees and therein a stage – a projection simply states “DAF” and twenty bottles of mineral water are lined up on the drum riser.

There is a drum kit and a set of decks stage left and a microphone on its stand.

The setting is twilight and darkly primal. Large trees cast their shadows. Very German. The anticipation hums in the air as if lightning is about to strike.

A chiseled and well-shorn German gentleman appears stage left and bows to the applauding crowd. He moves past the decks and hits “play”. A shuddering bass line begins to rumble. He sits at his drums, counts himself in and begins a gentle but insistent rhythm.

A taller Mediterranean gentleman, equally well-shorn, enters stage right. Smiling. He begins a to intone deeply in German an insistent, simple rhyme over the swelling bass and drum soundscape.

This is DAF. This is Robert Gorl and Gabi Delgado. It is instantly recognisable and yet strangely archaic and oblique. And it looks and sounds like a ritual for the invocation of the spirit of Rock and Roll, but it has little to do with the electric blues and soul that kick started the search for eternal youth through music. This is much deeper and wider than that. And its sound is European with no trace of American influence.

The mantras and groundswells of the music change every three or four minutes. It speeds up and slows down. Notation is amended, a bit. Words change, although there are not many of them. But the simple, insistent undertow of the music, and the chanted exhortations remain constant and compelling

The sound is modern and yet ancient. It is tribal but universally recognizable. It is a late twentieth century version of primates’ first attempts to communicate with each other through sound. Voice and drums joined with modern technology.

Gorl caresses and strokes his batterie. His performance is not that of the typical drummer man hitting hard. He is dynamic in a florid and expressive way, reflecting jazz and other non “Rock” persuasions. He plays his kit, rather than smashing the living daylights out of it. The bass sequences are extemporized upon, rather than slavishly adhered to. He carefully plays around them.

DAF are not in any way what we would call tuneful. There is little colour in the music. No melody or harmony. The chants of “Der Mussolini” and “Verschwende Deine Jugend” evoke the terrace and the battlefield. But it is human and celebratory and everyone is smiling. Their four albums released by Mute in the early Eighties are picked from randomly and each piece coalesces with the others to form a whole that is intensely of itself. No other artists spring to mind.

DAF sound like nothing came before them and nothing came after them. But you know this music and you feel it.

Walking back through the woods, past people dressed like a lost forest tribe, the aftershock of this performance was one of wonder at their singularity and the fear that the modern music world would not countenance something like this occurring again which did not scream and shout at us through pre-defined fashion and over processed sound.

DAF are not for the faint hearted. But as with all great art, there is a simplicity that prompts the thought that anyone could do it, coupled with the deep understanding that no one else can.