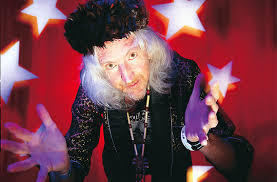 One of the great psychedelic pioneers and the definition of rock eccentric and plain brilliant guitar player and our favourite loon and frontman of the fantastic Gong – David Allen has announced that, due to an aggressive cancer, he only has 6 months tolive.

We knew he had been ill for some time.

LTW once had the please of hanging out for an afternoon with the madcap at Beautiful Days festival where Gong had stolen the show with a mind and body bending set that saw the guitar genius dance around in a spandex silver suit like a pixie on space dust.

All afternoon he was side stage watching the bands and we talked of everything from the tripped out sixties to his old mate Syd Barret and the glissando guitar technique that they both shared to modern music and the world as it is now- he was brilliant company – combining the enthusiasm of a teenager with the wisdom of a tribal elder and the madness of a witch doctor.

We won’t miss you yet Daevid because you are still here but we have always loved your madness and your records. Shine on you star spangled genius!

LTW quite him in an interview about Syd Barrett here

This is his official statement…

OK so I have had my PET-CAT scans (which is essentially a full body viewing gallery for cancer specialists, ) and so it is now confirmed that the invading cancer has returned to successfully establish dominant residency in my neck.

The original surgery took much of it out, but the cancer has now recreated itself with renewed vigour while also spreading to my lung.

The cancer is now so well established that I have now been given approximately six months to live.

So My view has Changed:

I am not interested in endless surgical operations and in fact it has come as a relief to know that the end is in sight.

I am a great believer in “The Will of the Way Things Are” and I also believe that the time has come to stop resisting and denying and to surrender to the way it is.

I can only hope that during this journey, I have somehow contributed to the happiness in the lives of a few other fellow humans.

I believe I have done my best to heal, dear friends and that you have been enormously helpful in supporting me through this time.

So Thank you SO much for being there with me, for the Ocean of Love and Now, importantly, Thank you for starting the process of letting go of me, of mourning then transforming and celebrating this death coming up – this is how you can contribute, this would be a great gift from those emotionally and spiritually involved with me.

Born in in Australia in 1938 David moved to the UK 1961. In the mid sixties he founded Soft Machine and was big buddies with fellow traveller Syd Barrett. He had to leave Soft Machine because of visa bollocks  after being refused entry to the UK for overstaying  following a European tour. He moved to Paris where he formed Gong, only to have to flee France for Majorca following the 1968 student riots.

Gong were one of those counter culture bands that straddled hippie and punk- energy, ideas and lunacy!