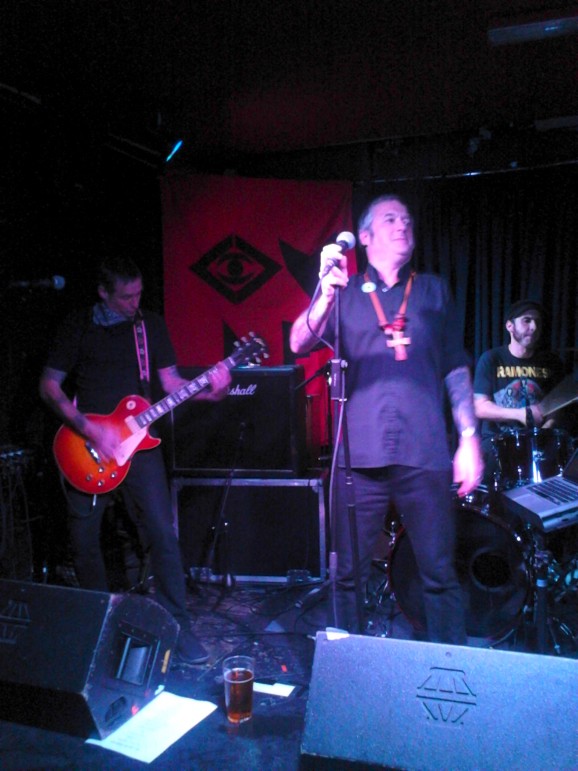 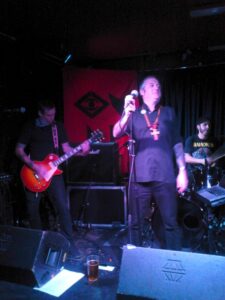 Thanks for that, Slaves. We will try. But there’s not much to crack a smile about in the Metropolis, these days. All our shops are shutting, our venues are being bulldozed, our heritage and culture is on its uppers. The only red lights in Soho are the ones on top of cranes, rented in to build all the luxury flats that nobody will ever be able to afford to live in.

Hard Times in Bleak House, Mr Dickens. So where do we turn to for a little light relief? The gin house? The whorehouse? The band with the silly name?

Daemonik Fonce (more than likely spelt incorrectly, here) are a good-spirited, cheery lot – but not in any kind of shallow way. We’re Londoners, damn it. We’re sophisti-fuckin-cated. Our grinning punk rockers need substance to cut our mustard. And, by golly, substance is something the Fonce have in spades.

Almost-identical twin brothers Paul and Stonk on guitar and vocals respectively are the powerhouse duo behind this energetic outfit. Between their thunderous samples and scorchio Les Paul guitarring, they make a fine, gritty and grunty sound, not unlike (and I kid you not, here) the best of The Ruts or Buzzcocks. Or perhaps Magazine would be more accurate, given the chopsy intervention of ex-Tits of Death Hannah on keyboards.

Whatever. Songs like ‘Electric Mountain’ and “the one about the ferrets” come across like the best the New Wave years had to offer us all, evoking a happier time filled with coloured vinyl seven inch singles, zips, zips, more zips and conkers (four of which hang in a ludicrous necklace around Stonk’s neck).

The brothers and their three accomplices beam like crazy throughout the set, clearly revelling in the glory that comes from penning a tune as ludicrous and as essential as ‘An Abundance of Bananas’ – a true story, it seems, and as chanty and shouty as the very best of The Fall. Think Hex Enduction Hour and you’ll be with me on this particular page. And their tribute to gentle-voiced and much missed poet Ivor Cutler is as fitting as you’re going to get. Of course he would approve.

These are early days. I think this was their second gig. And The Fonce already have it nailed. No wonder they looked so pleased with themselves.

So thanks for the advice, Slaves. But, you know, it’s really, really not that bad.