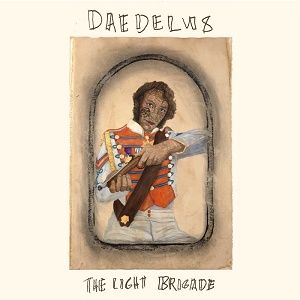 Alfred Weisberg-Roberts (aka Alfred Darlington, aka Daedelus) is a fascinating chap. Like his mythological namesake and father of Icarus, he is a craftsman of quite unique style and skill.

The Light Brigade is based around the three-year Crimean War and contains beautiful, haunting pieces which will exhaust your every sinew. Opening with Until Artillery and quoting from Tennyson’s The Charge Of The Light Brigade is Adam Webbow from 90s Manchester underground band The Lobe. Setting the scene with a lamentable intro and subtle voice leading into what can only be described as a string of beautiful sadness’s.

Tsars And Hussars has a fabulous continuing bass sound and grips soft, rising vocals keeping them earth bound despite their inkling to float and fly away.

Sometimes ambient, sometimes folk, often experimenting in a familiar comfort zone, The Light Brigade is a wonderful journey through soft, relaxing, provoking tones and textures. Battery Smoke contains a lovely flowing guitar and Belonging is beautiful in the extreme sensing a warmth and caring that can only be given by a Mother to her Son.

Pre-munitions lifts the pace slightly and provides an elevating feeling again drifting beyond and away. The occasional drum beat and snare serving perhaps to remind us of gunfire on an open battlefield.

What is apparent on The Light Brigade is that Deadelus is a free soul unwilling to compromise other than with the sounds of his mind. There are delightful interplays between, and within tracks which are often compelling and beautiful. Album closer, Country Of Conquest features a full string section and lonesome piano interludes of inspirational resonance.

An experimental album of sorts but without the nonsense of improvisation, The Light Brigade is an exquisite collection of music by an artist who is clearly not affected by outside influences and is content to work with his own, inimitable style and focus.