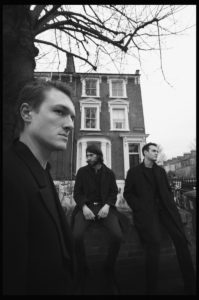 Louder Than War’s Ioan Humphreys reviews the brilliant album from the indescribable CXR.

CXR first appeared on my radar via a Facebook post by Thurston Moore. Recommended and added to a bill with the amazing Big Joanie was enough to get my interest piqued. This band are an absolute revelation and are the best band I’ve heard for ages. Forming in September 2017 and inspired by the likes of Throbbing Gristle, Teenage Jesus and Black Flag, CXR come with some major credentials, but most importantly, they come with massive potential. They’ve just come off a tour with Moore where they played with Moore and Big Joanie at New River Studios.

Their last release is Hard Time Killin Floor Blues and what a product. Opening track ‘Whiteness is a state of mind’ has fuzz and pounding drums that lead to pained throat scrapping vocals over noisy guitar. Follow up, the brilliantly titled Death To Women Haters opens with an audio clip that leads to more pained vocals over stabbing guitar and drums. They seem to be pounding out a morse code for the female led future. A mid song break down gives some rest bite, before the (beautiful) racket starts up again. This is the sound of anger.

Lights Out On The Strip’s feedback start leads to a surprisingly sludgy track which is surprising seeing as what’s come before. The impassioned vocals are still there vying their way over the increasing violent and fucking glorious noise this three make. Gun In Act One  has a niiiiice bassy start – almost Joy Division-esque. Jazzy time signature drums come in to accompany spasmodic guitar stabs in between the spoken word delivery about Elvis living in space, loneliness, power and love. It’s schizophrenic and unlike anything you will have EVER heard before. This track is the turning point. This is what makes me absolutely adore CXR, and in my humble opinion, makes them one of the most exciting bands around at the moment.

Having Kids Is Narcissism erupts right from the start with throaty guitar, ride cymbal heavy drums and a beautiful chaos to it that makes the 1:08 running time an absolute riot. This lot just do not give a fuck and it’s so fucking refreshing I can’t tell you. ‘Red hot poker’ again just erupts into a hardcore nightmare with the staccato vocals and guitar driving the mayhem. Of course this all changes when the tempo takes a tangent and the vocals come together almost like a torch song. But, of course, this doesn’t last for even a minute because an absolute tirade of noise and guitar take the final quarter of the track to its indignant end. Jam With Milk is a noise track with an electro voice talking about what has come before. It’s a brilliantly leftfield ending to a ‘where do you start to describe?’ album.

Hard Time Killin Floor Blues  is an album jam packed full of aggression and innovative ideas. It’s also got a heart as big as it’s decibel reading. Ignore CXR at your peril because you may accidentally leave a more inferior band into your life. Please don’t do that. That would be a crime. Listen to CXR. But please don’t have nightmares. Just listen to CXR.