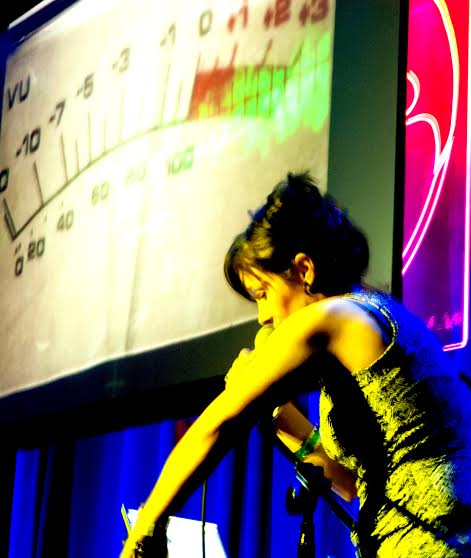 There are a number of women pushing ahead with electronic music in the North… after all, The annual Manchester celebration of electronic artist Delia Derbyshire, the woman behind some of the best sound engineering of the 1960’s and 1970’s (as well as the Doctor Who Soundtrack!) took place in January. Yet hers is a legacy which inspires people all-the-year round, and I spoke to Caroline Churchill (AKA Caro C), organiser behind Manchester’s Delia Derbyshire Day and musician, to find out more…

Caro C is a quirky contemporary recording artist who is determined to draw attention to the importance of women in electronica. It’s more than 50 years since Delia Derbyshire was told by Decca Records that ‘the recording studio is not the place for a woman’ , and nearly 10 years since her archives (following her death in 2001) were delivered in cereal boxes, to start out their loaned life at the University of Manchester.

‘Showing sound as a medium in which women could suceed’

Derbyshire was born in Coventry in 1937, and touched the North early, evacuated here as a child during the war. However, she then went on to study Mathematics and Music at Cambridge; demonstrating a real technical flair which although was rejected by Decca Records, gained her a job at the BBC as a trainee studio manager. She then made a request which completely defied gender expectations at the time; asking to be moved to the Radiophonics Workshop. It was here she developed instruments and sounds which would become the soundtracks to a number of much-loved shows. Her output was varied as TV title music ‘using only animal sounds’, to the establishment of private electronic music studios Unit Delta Plus: showing sound as a medium in which women could succeed.

Now it is the work of Caroline Churchill (Caro C) which is crucial to honouring Derbyshire’s legacy; drawing attention to Manchester as a place of women at the forefront of modern music and proving that there is so much to listen to – right now. This is part of proving that whilst Derbyshire may not have come from Manchester, she inspired women here to work in areas of music, such as electronica, once associated only with men. As Caro celebrates:

“Delia Derbyshire Day has been an amazing success since we – a winning team of myself, Ailís Ní Riaín, Naomi Kashiwagi & David Butler from the University of Manchester – did our first event at Band on the Wall in 2013. It seems to fit in well and be welcomed by Manchester; and it is a joy to share that with audiences and provide opportunities for mainly female artists to create something new in response to Delia’s fascinating archive. I think it’s always good to champion those who are dedicated to their craft and dare to be rare. Like Delia did.”

And there are certainly many daring to be rare, right now – or, as Caro calls them, ‘amazing lasses making some great noises here in Manchester.’ It is important not only to look to the pioneers of the past, but realise the power of the present. Just some examples Caro gives include Janet Wolstenholme (aka The Present Occupier), Oona Baines and her band Poppycock, ILL (who in Caro’s words ‘have got it going on’), Rose Niland in her various groups and Avital Raz; as well as spoken word artists such as Karen Shannon and Michelle Green.

Caro C herself is also working on a new album (‘Everything Gives to Something Else’), her third in a city where she says she is ‘expanding as an artist’ and crucially, shows women’s ability to transform through music, rather than conform. Thanks to women working in the arts as she does, Manchester has been the place of feminist library takeovers, gig nights and big events– with the ‘Wonder Women’ festival celebrating female radicalism set to take place here in March.

‘How experimental – or just mental!’

Radicalism runs through Caro C’s work too – with music not only breaking expectations, but radically breaking genre boundaries: ‘Often people have remarked on how experimental – or just mental – my musical output is!’ She says.

Just as Delia Derbyshire did not limit herself to scripted music, but experimented to incorporate the visual arts, Caro has used music and sound design for theatre/film, spoken word acts and a range of collaborations. And it’s not just a wide range of activity she’s involved in, but activism too:

“I guess my work with Delia Derbyshire Day is a sort of pro-activism in the sense of increasing the visibility of some amazing female artists past and present.” She says “Visibility is key really – the more female/disabled/diverse artists we see and hear about, the more others will hopefully see this path as a viable option for them. And the richer more exciting creative landscape there is for us all to revel in. Art is a conversation isn’t it? For me, it emerges from interaction – with life, others and the self. I also strongly believe if we don’t evolve on the inside, there ain’t much evolution going to go on that really matters on the outside.”

It seems fitting then that Manchester is recognised as a city driven by technical evolution in and out; first as a city of heavy industry, then heavy music. It’s a potential nurturing ground for cutting-edge sound techniques. For example, women and men alike were 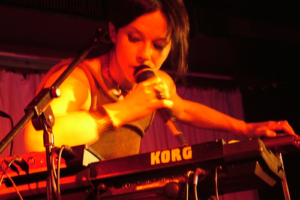 evolving here musically as early as the 1970s; following in the footsteps of Derbyshire by throwing together old pieces of industry and machinery to market electronic music. Think Factory Records. New Order experienced with synths and drum machines through the 1980s – leading to the mass electric experiment of ‘Madchester’. It is thanks to the early experimentation of people like Derbyshire that such progress was possible. Now you can hear her influence within the work of artists here today, including female-fronted bands such as Rose & The Diamond Hand, Ill, and of course, Caro C.

Caro C started with a synth back in 1998 following damage to her back; making music with the resources she had – just as Delia Derbyshire did when working with radiophonics at the BBC in the 1960’s. She’s lived and worked in both Newcastle and Berlin, but it was Manchester which celebrated the full extent of Caro’s electronic ambitions; as she came to further her studies at The School of Sound Recording in 2007.

“I spent a lot of time horizontal or reclining when I was disabled and learning how to play synthesisers and use software on a cheap old laptop was a great way to learn to make music and no-one was there to tell me it was right or wrong, I just followed what felt right for me at that time. And then my sound developed. (Now) I feel there are more outlets for more unconventional sounds and voices.”

Manchester is a massive outlet, clearly. The city, its resources and its women all feature strongly in her work, including her first two albums Es Muss Sein (2008) and Til You’re No Longer Blinkered (2010). Yet she also has opened up platforms for expression from other artists – her ‘visual’ theme for Delia Derbyshire Day this year (taking place on January 16th at HOME) saw a number of female artists come together. For example The Architects of Rosslyn with multi-instrumentalist Howie Jacobs produced a live Delia Derbyshire inspired soundtrack for a 17 minute collage of films created by self-confessed ‘movician’ Di Mainstone.

‘Celebrates sound, rather than seperating gender’

The powerful thing about the inspiration of Delia Derbyshire and women like Caro C too is their creation of a culture which celebrates sound, rather than separating gender.

As this isn’t music by women, exclusively for women; it is capable of inspiring and involving all, just like Manchester. As Caro says “Women face obstacles for sure – whether they are inner or on the outside. But I do believe we live in a patriarchal system that doesn’t really do most blokes any favours in terms of conditioning either. Most of us have to transcend our limitations, ourselves, our ‘stories’ and what leaves us feeling separate. I guess in electronic music, it’s about daring to have to confidence to get stuck in.”

Manchester is the place to start, it seems. For more information on Caro C, her work in the city and electronic music, you can visit her website. You can also find more about Delia Derbyshire and DD Day here. and Manchester’s ‘Wonder Women’ festival here.