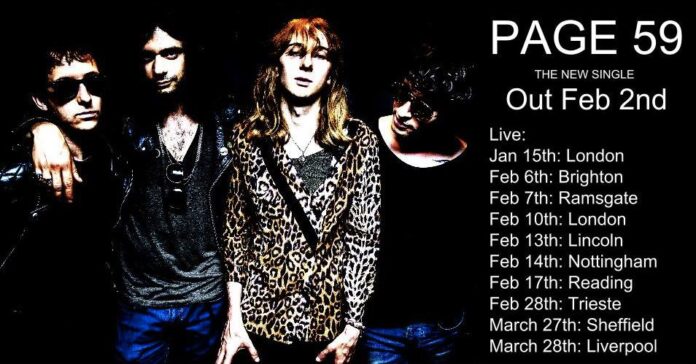 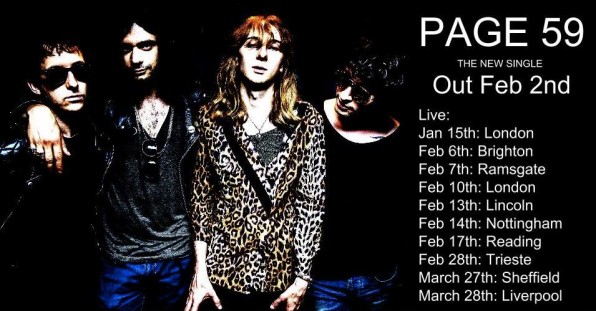 We’ve been tipping London space-punk pioneers CuT for great things for some time now and are pretty sure 2015’s going to be the year they break big. They begin their assault on the charts (or wherever) officially with a new single which drops on the 2nd Feb and is quickly followed by a UK wide tour. But before they “smash it BIG time” they decided one more party for their loyal London followers was in order, a party that doubled as Artrocker’s “New Blood” show and that long time supporter and Louder Than War scribe Keith Goldhanger was present at. Check out his review, where CuT played alongside two other bands we strongly recommend, Asylums and Taman Shud, below.

There are moments during the short TAMAN SHUD set of tunes when one stands here thinking that this is the best thing in the world ever. Covering all bases, ticking every box and reminding us unintentionally (They’re far too young) with snippets of noise, of some of the things we blamed our struggling lives on back in those days when lurching on one foot in the London borough of Camden was so popular that it was even given a catchy name and caused us to not give a fuck about getting a proper job.

Young folk may be content in saying this four piece remind us of Iceland’s Dead Skeletons but the more mature among us are hearing Killdozer, Sonic Youth, The Fall, and God Machine riffs. We’re reminded of the sounds that were played over the Camden Falcon PA in between bands many years ago whilst blokes called Damon and Jarvis annoyed the locals by trying to beat their mates on the pool table in the crowded pub and ignoring what us, the cool people who never did manage to become pop stars were lapping up in the back room. 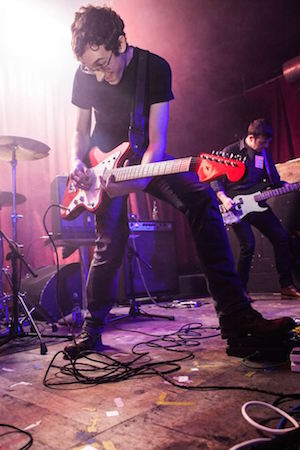 TAMAN SHUD (Photo right © Keira Cullinane) have two bass players and therefore everything is bottom heavy. Two loud shouty singers with the echo on ten fill in the gaps and therefore eradicate these comparisons mentioned as they cut through the racket whilst simutaneously taking a brisk walk around the venue’s four walls and ceiling. The drums pound away with a guy who doubles up on vocals and those of us who have recently found ourselves spending many midweek evenings like this find ourselves still getting very excited again. A small synth and a loud guitar are also responsible for this racket and it’s a fantastic synchronised and carefully cheoriograhed racket that spins around us as we leave the room to catch our breath thinking that if we ever cross paths again the performance will never be as good as this one.
We’re soon put in our place by those people shrugging nonchalantly as they tell us they’re seeing Taman Shud for the second or third time and telling us they’re getting better on every visit. This is so good this evening that we feel a second opinion may be a necessity. Maybe next time we’ll get really carried away and start quoting lyrics whilst wearing the band’s T-shirts and shaking people by the shoulder that haven’t seen this yet.

ASYLUMS have the ability the look and of course the (radio friendly) songs to maybe one day become the pop stars that Jarvis and Damon became. Their short catchy, shouty tunes are yet again a joy not to just hear played at ear splitting volume but it’s a great spectacle to watch. One feels that the masses out there, you know, the ones that have sensible jobs, shit cars and shit neighbours in their shit towns that they need their shit cars to drive them away from at weekends will adore this band in time to come. It may take a couple of albums and many more evenings out like this but we believe that as long as we let them carry on getting on with what they do well may be handsomely rewarded. This is still very early days for this Essex four piece and are again a joy to be in the same room as.

If that’s not enough to make us jump up and down on one leg with excitement then our promoters this evening, the wonderfull ARTROCKER people give us CuT to round off the evening. Another half hour heads down sonic assault and a set of tunes that some of us believe could end up on a slab of vinyl one day as good as the first Clash album. Short songs, catchy choruses, fast drums, tight verses and a bucketload of feedback joining it all up together thus avoiding any introductions or banter between the bits when songs end and the next one begins. CuT have a set of tunes at the moment that blend in nicely with one another in whetever order they appear to throw them at us on during whatever evening we’re attending. We don’t even get the debut single “Lets Go” tonight – It’s not necessary – everything else is equally as exciting and thrilling.  Every time they turn up they deliver and anyone that doesn’t get off their arse over the next few months to get into their shit cars to drive to where these rooms are located may as well keep their own heads down and simply accept their lives are missing out on something loud, proud and an essential part of our lives. Their next single “Page 59” is out any day now and it could be one of the greatest love songs you’ll hear this decade. Once we get that time machine working we’re going to get the Shangri Las to do a version but in the meantime we’ll stick with the current version with the Essex accent at the forefront.

The year is just over a dozen days old and this gig has been already been tagged up (we’ll call it exhibit one) to be held aloft in December when we try to remember what 2015 did to us and the effect it has had on our lives.