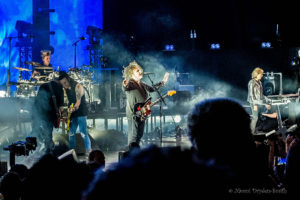 In a recent interview with Rolling Stone, The Cure’s Robert Smith have given delicious hints to the upcoming 14th album and it looks like a dark Cure outing is emerging…

“Because it’s the anniversary of Disintegration, I was thinking about how we did that, and how we turned that into something and what my mindset was. A key part of it was everyone being away from home, being away from everything they loved and being in one place at the same time. So for the first time in 20 years, we went into a studio — we actually went into the studio where they did “Bohemian Rhapsody,” funnily enough. It’s a great studio in the middle of nowhere. We just played music for three weeks. And it’s great. I know everyone says that. But it really is fucking great.

It’s so dark. It’s incredibly intense. And I’ve waited 10 years to do something that means something. It’s going to work really well. I’m not sure how much of it we’ll play this summer at festivals. It’s not really festival music. The songs are like 10 minutes, 12 minutes long. We recorded 19 songs. So I have no idea what to do now. The others are saying, “Triple album!” I’m saying, no let’s not. I’ll pick six or maybe eight songs and do like a single album. But I think it will delight our hardcore fans. And probably really, really infuriate everyone else. At my age, I’m still doom and gloom.”

“We’ll finish it before we start in the summer, and it’ll be mixed through the summer. And then so release date, I don’t know, October? Halloween! Come on!”

One Direction To Work On New Album With A ‘Punk’ Band

The Damned announce Paul Gray back in on bass and Tony...

September 11, 2017
We use cookies to ensure that we give you the best experience on our website. If you continue to use this site we will assume that you are happy with it.Ok