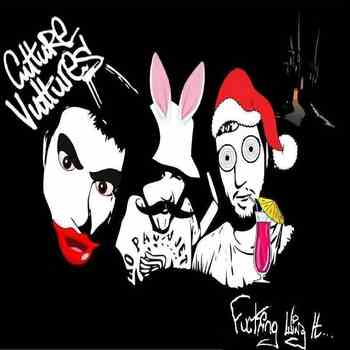 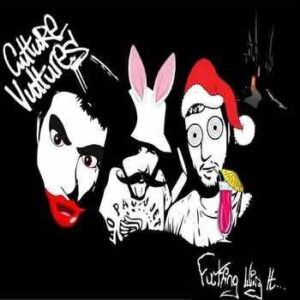 Something is brewing in West Wales. Cultures are colliding, alliances are being forged, and a scene is slowly getting bigger and bigger as each weekend passes.

Young men and women with divergent tastes but with a shared sense of ambition are doing it for themselves, creating a buzz, getting influenced by, and influencing, others. Wannabe film makers, sound engineers, producers, singers, DJ’s, artists, poets are co-existing and putting paid to the myth that there’s trouble afoot with the yoof of today. These collectives are full of well read, street smart people who are not looking to get rich quick but who care about their art and what exactly it has to say about themselves and the world around them.

A group who are embedded in this scene and who are gaining more and more popularity every time they release a single, or perform live, are hiphop trio The Culture Vultures. Made up of brothers Squires, Po Griff and friend Finn Bar (I’m informed these are not the names on their birth certificates), the Culture Vultures are a hiphop group that don’t deal in “your missus is a nutter” cheap gags or who (despite what the album is called) wing it and hope for the best. Their observational, psychedelic, sarcastic, and intelligent rhymes are full of references to such thinkers as Hunter S. Thompson, Bill Hicks, Doug Stanhope, and Tom Waits. Fucking Wing It is their debut, full length release and they’ve come out of the traps flying.

With multiple producers (Cycle, Hagie, Zed Beats, Kuma, FlyLo and Blended Beats) the album could easily have been disjointed and muddled, but instead there is a cohesive thread running throughout. The album is more ODF than GLC with clever use of film snippets and dialogue adding to the feel.

Lyrically, the Vultures deal with the various issues that you encounter with growing up in rural Wales including the free-party scene and its negative sides, lack of employment options, substance enjoyment and misuse, and even death. All of which is presented with humour, intelligence, and slang that only those in and around the group will fully understand.

As it’s the group’s first full length release, there are a few little sections where things don’t quite work and they slip into using some language that doesn’t feel natural for them. Gladly, these moments are rare and don’t detract from the feeling that there is something special brewing here with these guys.

Fucking Wing It is, like Wales itself, occasionally sunny, sometimes extremely dark, funny yet foreboding. A great release and a group you should all keep your eyes and ears out for.

Culture Vultures are on Facebook and Twitter. Fucking Wing It is available to buy or for free from the groups BandCamp page.