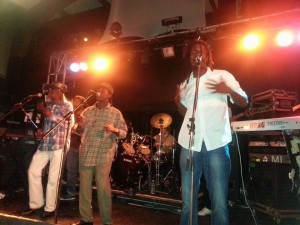 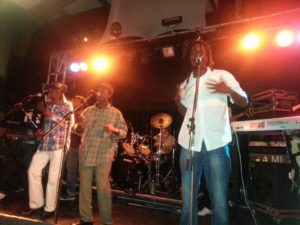 UK reggae is on a high and Culture turn in a classic Liverpool show, demonstrating they’re still as relevant as ever.

Following the success of their Yellowman/ Dillinger show and Sefton Park weekend festival, the kindly souls at Africa Oye  have put on an event which, rather regrettably, is billed as the last cook out of the year. What’s a cook out, you ask? Think Caribbean cuisine, live music and good vibes and you’re on the right track.

So who better to close the ceremony than Culture, a classic roots band adored by The Clash and loved by a wide range of people young and old, and the only band of any genre to receive nothing but five star album reviews from Rolling Stone magazine? Like a complete and utter twat I missed their gig at this very venue last year, being blissfully unaware of its very existence until a considerable amount of time after it had been held, so you’d be correct in presuming that wild horses bending down backwards, forwards, upside down inside out and round and round weren’t going to stop me from missing this.

A summery day suddenly giving way to a minor rainstorm in the garden brought to mind the prophecy brought so vividly to life in Two Sevens Clash; a minor apocalypse set to the tune of the booming sound system blaring out from inside the venue. With a soundtrack like that I suppose you can’t really complain too much…

Opening the ceremony are London’s Rasites, who are also acting as Culture’s backing band later on. I must confess to not being too familiar with this band or their music prior to the event. A shame, because they’re good. Really, really good in fact and when the end of the set came I found myself scratching my head in bewilderment, wondering how on earth I’d managed to miss them up until now.

A quick search reveals that they’ve been playing together since their teens after forming in the late 90s, and by God it shows. Adjectives like ‘accomplished’ and ‘tight’ are often presented as dirty words by members of the music press, sometimes rightly so, often associated with craft over creativity and sense over sonic adventure. However, when done correctly ‘accomplished’ musicianship can be a thing of beauty, especially when you have put as much heart and soul into achieving it as these guys clearly have. Vocally they bring to mind the purity of The Mighty Diamonds, musically there are shades of early Aswad, Steel Pulse and 80s Gregory Isaacs but the sound, like many of the best bands, is very much their own.

I have said this before, the UK reggae scene has never been more exciting; Rasites are part of a movement, along with Hollie Cook, Dubwiser, Laid Blak, White Bicycles, Rasta4Eyes and doubtless many other bands and solo artists I’m yet to discover, currently doing the country proud. It can surely only be a matter of time before everyone wises up to this fact.

“And I can see with mine own eyes, it’s only a housing scheme that divides.”

It’s a powerful line, one that has always stuck with me. In these austere times where housing tenants and property developers have been allowed to run riot on these very shores, with the shocking rise of ‘poor doors’ for  less well off residents in certain areas of London, and the inexorable (and thankfully, for the moment, scrapped) introduction of ‘anti-homeless spikes’, it’s a line which seems particularly relevant when put into context with the profit driven inequalities plastered so vulgarly on display at the summit of 21st century Britain.

It comes, of course, from the title track of Culture’s mighty debut album ‘Two Sevens Clash’ , a record which any serious fan of reggae music in all its different forms will surely own in some format or other. Written by the late Joseph Hill, Culture’s frontman and songwriter, the song evokes a prophecy made by Marcus Garvey about chaos coming when the ‘sevens’ met, as well as addressing the social injustices met by many young people and putting them into context with the prediction. It’s an unforgettable track which prompted many people on the island to close their businesses for the day out of fear and concern, and is brought vividly to life tonight by Joseph’s son, Kenyatta, who has been fronting the group since his father’s tragic death whilst on tour in Europe back in 2006.

During this tour Kenyatta stepped on stage to take over on vocal duties for the rest of the tour, playing no less than nineteen shows! He’s a relentlessly effervescent, excitable frontman, never letting up for a second with his between-songs banter, a man clearly in love with life, music and the universe. It’s quite a sight, seeing him sing in unison with original band member Albert Walker and long standing vocalist Telford Nelson, with the backing of the Rasites proving the perfect musical accompaniment, Cyrus Richards’ keyboards giving tracks such as ‘Pass The Torch’ and ‘See Them A Come’ an added dimension.

A fairly small crowd (compared to the last reggae event I attended here) can’t dampen the atmosphere; by the time the haunting melodies of ‘I’m Not Ashamed’ bring the show to a close you can’t help wondering where the time went. A whirlwind performance that seemed to end in a flash! Great stuff though, an often spine tingling nod to the past with feet firmly pointed towards the future which would have made Joseph proud. I’ll leave the final word to a long time fan upon hearing Kenyatta’s 2007 album with the band, which came to my attention via their official Facebook page. Culture is ALIVE.

All words by Sean Diamond, find his Louder Than War archive here.