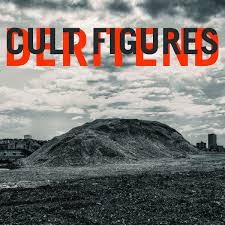 Brand new album by Cult Figures, their follow up to The 166 Ploughs A Lonely Furrow, the debut album by the reformed band released a mammoth 41 years after their formation way back in 1977. Now they’re back with eleven new tunes recorded at the famed Toerag Studios with Liam Watson. Ian Canty enlists in the cult…

Cult Figures began in Birmingham in 1977 and initially went through a number of band members including one Roger Taylor, later of Duran Duran. Two years later the band made their debut on vinyl with the Zip Nolan single. Issued on Rather label, the pairing of singer Gary Jones and guitarist Jon Hodgson were backed on the record by the imprint’s founders The Swell Maps. A year later in 1980 the In Love EP also emerged.

Little was heard from Cult Figures after that second disc, bar some archive releases, until the band reformed in 2016. The original duo was bumped up to a quintet with the additions of “man of a 1000 bands” Lee McFadden on bass, drummer Stuart Hilton and guitarist Barney Russel. They set about gigging and in 2018 recorded their first and very good LP The 166 Ploughs A Lonely Furrow.

I was lucky enough to witness the band in super live form on stage at London’s Dublin Castle a few years ago. They were part of a terrific, stacked bill that also included the great Jowe Head and Disco Zombies. An excellent night’s entertainment, but how would Cult Figures fare in the “difficult second album” territory? Well, let us see.

Deritend, with the title referring to a sector of their Birmingham hometown, begins with the reflective ringing rifforama of Chicken Bones. Musically it is bright and fresh and lyrically it sets the album very firmly in 2021, despite the long history of the band, with “the walking dead” being this nation that marches on with their eyes firmly fixed on their mobiles. Then Donut Life shimmers elegantly, in more of a pop context that the previous effort. It may be that the metaphor central to the song is pushed a bit far, but since the music is fab we’ll let it pass.

Also released as a single, Lights Out comes next. This tune is a little akin to what a psychedelic version of Buzzcocks might sound like, with a whistling refrain added to an insistent backbeat to keep things tight. The song turns a searing light to the darker corners of the writer’s mind. Throughout Deritend, Cult Figures are pretty merciless in examining both inner and outer torment, not sugar-coating things one bit. But the way it is accomplished is never at the expense of a good melody. The following Exile psychs-out even more, a long loping heavenly drone piece even, with a slow, PIL bassline and haunting backing voices.

The Omen is a bit more standard punk-pop, with a pleasing guitar figure and marching percussion tempo. There’s an anthemic, heartfelt feel to this one, which oddly reminded me a bit of The Angelic Upstarts. The lyrics passionately address the unfairness of UK society in 2021 in a similar manner to Mensi and Co, but with a lighter touch. Then comes the punchy guitar rush of Silver Blades. There’s a folk-pop tinge to this song, it’s fast, catchy and has a lovely flow to it. White Noise then chugs in with some delightful power-pop guitar work and energy to burn.

In Julie-Anne, the drum intro threatens to turn into My Sharona, before the guitars cut in and take it to another place entirely. This is honest, 2021 guitar pop music, a love (or hate) song of sorts. Psych rears its head again on Concrete And Glass, this time with a deadpan Brummie spoken-word style being backed by a gleaming folk-rock drive. The subject matter itself looks at the modern, homogenised changes in environment, where everything looks the same and personality has been stripped out in the name of progress.

A busy rhythmic pattern drives along the canter of the LP’s tenth offering Camping In The Rain. Again this is a reflection on modern life, with boring British holidays with terrible weather forming the background to reference a wide range of issues from relationships troubles to the harrowing plight of refugees. It’s modern England in a microcosm, with Cult Figures cutting into the realities of jaded 21st-century life. I very much like the keyboards towards the end of this track too. Set closer Privilege is a dazzling way to end the second Cult Figures album, with lots of fine guitar and backing vocal harmonies. “I’ve got a sense of entitlement” the chorus goes, the true story of where unfriendly users rule the world.

Deritend is a deep work that matches acute lyrical insights into an addictive musical palette. There is a lot to occupy one’s mind on this album and there is a sense here that although there are no easy answers, we should start asking difficult questions. With plenty to say that is both pithy and touching, the band are also adept at supplying just the right style to enhance the strong words contained. Though Cult Figures may have a lengthy track record, they’ve cut a corking collection which sums up the state of the nation in the UK in 2021 as well as any I’ve heard recently.

Cult Figures are on Facebook here and their Bandcamp site is here.