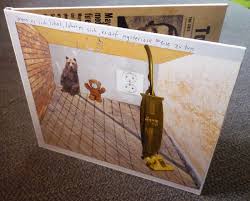 New album by the band Culpho Dog Gymkhana, that consists of two twenty minute tracks according to the sleeve, but listening proves otherwise…..LTW’s Ian Canty tries vainly to get the goods on this mystery outfit….

Something decidedly odd is afoot here. A sleeve drawing of a real bear, a teddy bear, a vacuum cleaner and wall socket in a rectangular room, with a German sentence above it that translates roughly as “If it is worth it, it is worth doing it mysteriously”. Food for thought as we probe further. The inner of the gatefold sleeve is a layout of the Topeka Free Press dated 22nd March 1938 (there does not appear to actually be a journal of that name), with spoof and suitably eccentric articles. The most salient of which refers to interdimensional detective Vincent Diagram, who apparently hopped through time to retrieve the stolen master tape of this very LP.

The rear of the sleeve is akin to an advertisement for Mr Diagram’s services, stating he is a “Specialist in contradictory multi-dimensional laws and temporal anomalies”. So I hope that makes things clear. This ad is placed above the name of two tracks Viva Aldi and You Can’t Buy An Archaeologist, which are both listed as clocking in at exactly 20 minutes. Which may lead you to believe that this refers to the contents of #3, but on listening turns out not to be the case. Also added near the bottom is that the music contained inside was written and performed by The Wasp, The Rat, The Rabbit and The Mole, with a guest appearance from one Nick Mott. So on the face of it Culpho Dog Gymkhana are a four piece outfit of undetermined age and sex. Culpho, by the way, is a village in East Suffolk. With a population of less than 100 people, I imagine a dog gymkhana isn’t the top of priorities there, but I could be wrong.

A bit of digging about yielded not too much more in the way of information. I managed to ascertain that this record is their third album, which is logical enough. The previous two long players, released in 2017 and 2018 respectively, are of course titled #1 and #2. A single entitled The Asteroid Fourteen was also issued in 2017. They seem to specialise in very long pieces of music. So far, so elusive, so bizarre. It doesn’t seem totally unreasonable to assume that Mr Alan Jenkins is involved in this venture though, despite a statement that this is “absolutely nothing at all to do with Alan Jenkins or anyone like him” appearing online.

So with my sleuthing capabilities not exactly matching the aforementioned Mr Diagram and revealing little apart from the connection to Mr Jenkins that anyone could have worked out, we move onto the music. The first thing one realises is that #3 is not made up of two twenty minute songs, as noted above. Rather it is in fact six pieces of varying lengths, with one titanic offering clocking in at around 40 minutes duration. As for song titles, one is very tempted to allot the two names to the longest tracks, but I’m not going to do that. Assumptions are dangerous. Numbers will have to serve instead.

Track one opens things up with a big Motorik beat alongside some surf guitar wrangling – it’s like Neu! and Joe Meek at the same time, as good as that sounds on paper too. Yes the experimental surf music (ESM) that Jenkins has perfected plays a big role on #3, but there’s a very wide range of other sounds stirred in too. This is a very neat introduction to the album, but only hints at what we’ve got in store next, the 40 minutes mayhem of track two. But don’t be too alarmed – this is actually more a suite made up of many sections and with more than enough twists and turns to keep one rapt.

Starting off at a spritely surf pace, it then falls away to a brief muzak passage, then a voice (very like Alan’s) mutters things including “questions about the economy”. Organ fuzz and psychedelics take over and with space and morse code noises until they drop out completely, leaving only a weird atmosphere. This then develops soon after into a kind of warped fairground music. Jazz saxophone floats in and out and a Neu! beat returns, before the nursery rhyme singalong of Sing A Song Of The Plants In the Garden. A driving ESM tune surges forth, then an atonal and harsh musical landscape is finally brought to a dreamlike and curiously hopeful denouement. Phew! Some might baulk at a 40 minute piece of music, but there is a ton of invention at work here and there is always more than one thing happening at a time. Come in, the water’s lovely!

Track three wobbles into a fairly straightforward but enjoyable piece of Shadows/Ventures guitar instrumental rock, before the second long piece, track four. Electronic warps take centre stage for a good while, until a guitar twangs in with what sounds very like a clarinet and organ. Water flows accompanied by electric interference, until we go into a drone. Then the organ and waterworks make a return, before an end-piece garnished with some very deep sounds and skips.

The final two efforts are a touch more traditional. Track five has some great guitar work that recalls Television and has a kind of jazz garage feel(!) and the final piece totes an unusual Beefheart/post punk rhythmic structure, which is both odd-sounding and addictive. #3 ends as it started, in taking musical building blocks and recasting them together into something new and fresh. There are so many ideas on the go right through #3 that all help to retain interest and a real knack for eerie but infectious and absorbing sounds.

I recently reviewed the Creams’ excellent CD collections and if they represent the more “pop” end of Alan Jenkins’ musical adventures, Culpho Dog Gymkhana do tend towards a more left field area. That is not to say there aren’t tunes that are more than capable of lodging themselves in one’s brain, but they’re scrambled in amongst a lot of very intriguing other stuff too. If you are new to the world of Alan I would point you in the direction of the Creams (reviewed here), the Deep Freeze Mice or his solo work (Onion Light Over Pig Country reviewed here) first, but for any seasoned fan or psych nut like me #3 is another fine entry by UK’s psychedelia’s people’s champ, even though it appears he would deny all knowledge of it.