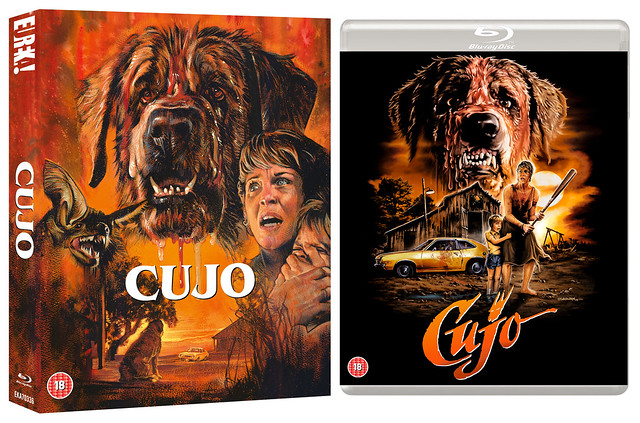 When we first meet the Trentons, it’s easy to imagine them living in something approaching the American dream. Vic (Daniel Hugh-Kelly) is an advertising executive. Donna, played by Dee Wallace is a housewife, who devotes most of her time looking after cute young son Tad (Danny Pintauro). Together, the family live in a big house in Maine overlooking the sea.

The truth is their marriage is in trouble. Donna has embarked on an extra-marital affair with Vic’s pal Steve, a Chuck Norris lookalike played by Christopher Stone (Wallace’s real-life husband at the time).

Vic is also under enormous pressure when a cereal ad he has devised makes national news as a number of children have seemingly vomited blood after eating it. The product is speedily recalled from stores across the land.

The fact that the family’s Ford Pinto needs some repair work is the least of the Trenton’s problems. Or so Vic and Donna might think.

They take the car to mechanic Joe Camber (Ed Lauter) and meet his family and their pet, who is called – you’ve guessed it – Cujo.

We’ve already seen this dog at the start of the film, playfully chasing a rabbit but being outwitted, the rabbit jetting underground into an bat’s roost where only Cujo’s head could fit. This wasn’t for the lack of effort, the frustrated dog barking away much to the displeasure of the rabbit and the colony of little bats living there. One of these creatures retaliates by biting Cujo’s snout.

Cujo looks like a gentle giant of a dog, adorable, despite the nose wound. Tad takes an immediate interest in him, although Donna is wary, likely because of Cujo’s size.

It won’t be too long before Tad sees the animal again. With his father away in an emergency meeting over the cereal maker’s account, he accompanies his mum to the repair yard as the car requires further attention. It finally conks out just as they enter the pathway to the Camber’s now deserted farmstead.

Rabies doesn’t take effect instantly but by this point, Cujo is clearly a much changed animal with pus leaking out of its eyes and foam oozing out of his mouth. Beethoven, he ain’t, believe me. Worse still, he has also acquired a monstrous desire to rip to shreds anybody who comes in contact with him. A true devil dog. 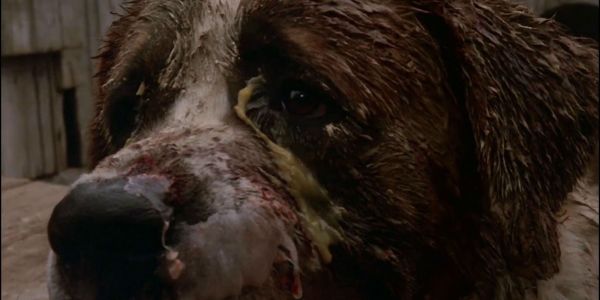 Cujo is a film of two halves. The first lets viewers get to know the main characters, including the titular dog. At times this veered towards soap opera and left me underwhelmed but the second half is a masterclass in suspense.

Donna and Tad are trapped inside their broken-down car. They have no food and very little water during a fierce heatwave, with the frenzied dog launching attack after attack on them and showing no interest in moving off to find someone new to terrorise.

Dee Wallace (The Howling & E.T.) and Danny Pintauro both give highly believable performances here, and director Lewis Teague handles the material imaginatively, occasionally employing low-to-the-ground POV shots that suggest the perspective of both dog and child. There’s also a great pirouetting pan inside the Pinto that perfectly expresses the sheer panic of mother and child after yet another assault from their increasingly demented predator. 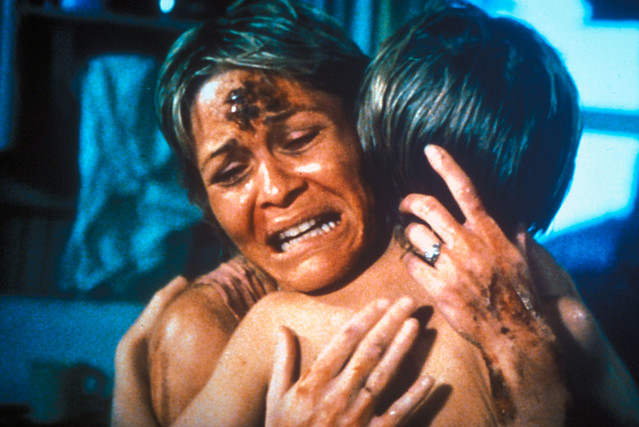 Stephen King novels have been adapted by many over the years. These range from big artistic and commercial successes like Brian De Palma’s Carrie, Stanley Kubrick’s The Shining, and Rob Reiner’s Misery to the instantly forgettable. I’m thinking here of efforts like Children of the Corn and Dreamcatcher.

Cujo might not match the standard of the former three films, but it does deliver more than its fair share of thrills. It’s arguably the most under-rated of the big screen adaptations of any King book.

Special features include a new audio commentary by Lee Gambin, author of Nope, Nothing Wrong Here; Dog Days – The Making of Cujo feature; interviews with many cast and crew; a Q&A with Dee Wallace from 2015, and much, much more.

For more on the film: https://eurekavideo.co.uk/movie/cujo-limited-edition-set/