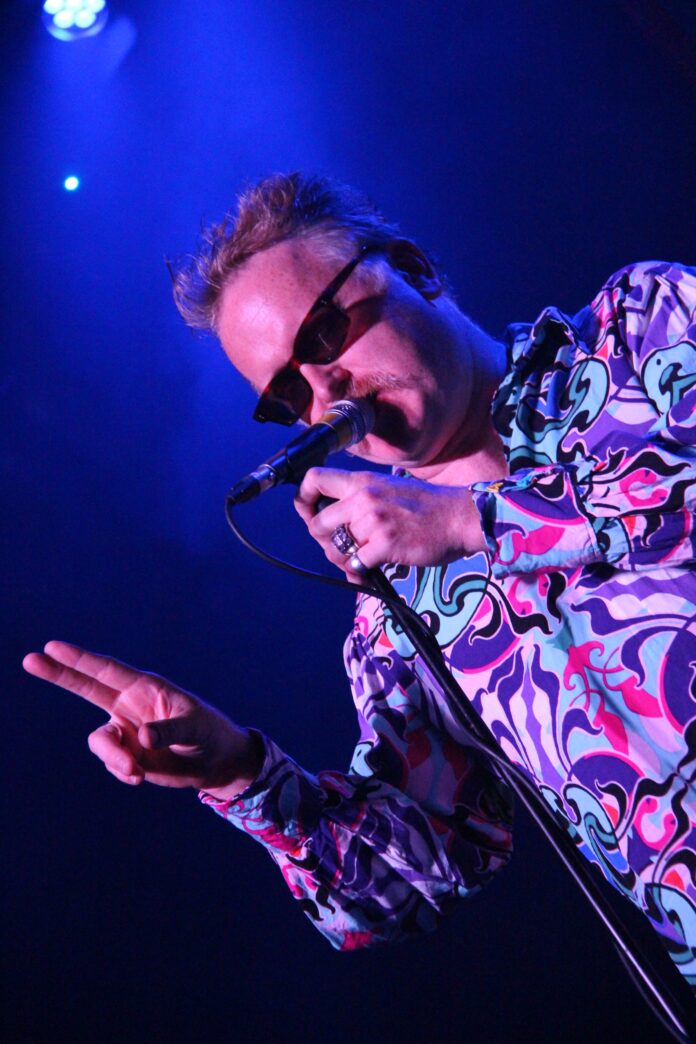 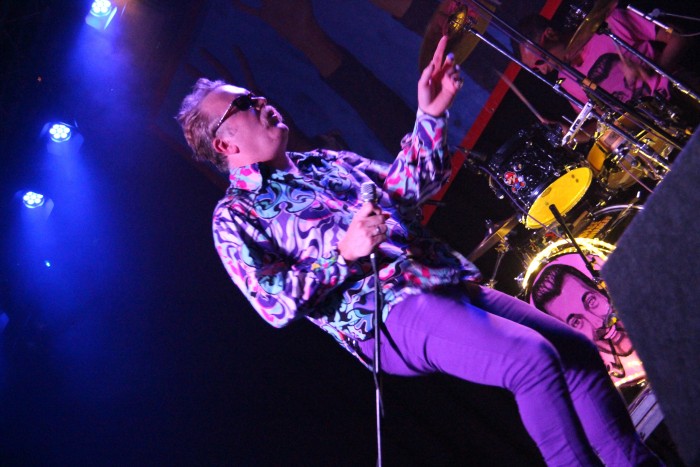 Twenty three years after the release of their most successful album, Asquarius, Cud are back, touring the UK with a series of ‘play the LP in its entirety’ shindigs.
Louder Than War’s Stephen Murphy went along to their recent Nottingham gig to find out if it was a case of old men re-living past indie-pop glories, or the start of a new chapter in the career of a band criminally under-appreciated in their 90s heyday.

The public’s appetite for musical nostalgia seemingly knows no bounds. From the fervently received return of The Libertines and The Stone Roses, to the multitude of mini festivals featuring indie-bands-of-yore playing their greatest hit(s), the past is big business.

Whilst there’s an undeniable thrill at witnessing the return of musicians that soundtracked a misspent youth, there’s also a very real danger that the heritage act you’ve paid good money to see, are now a wizened, dead eyed shell of what they once were, ploughing through their back catalogue with the enthusiasm and passion of a refrigerated cadaver. Let’s face it, there’s nothing more likely to kill your love for a band/musician than a) having your own mortality reflected back at you, and b) realising you’ve just witnessed a a cynical cash grab by a group that seemingly dislike the audience as much as they seem to dislike each other (yes, I’m talking about you, Echo and the bastard Bunnymen).

So where do 1980s/90s indie icons Cud fit in with the recent spate of reunions and thirst for indie reminiscence? Will tonight be an insipid exercise in reliving past triumphs for dosh, or can Cud 2015 bring something new and vital to the table?

Before that question can be answered, there’s the matter of tonight’s support band – In Isolation. 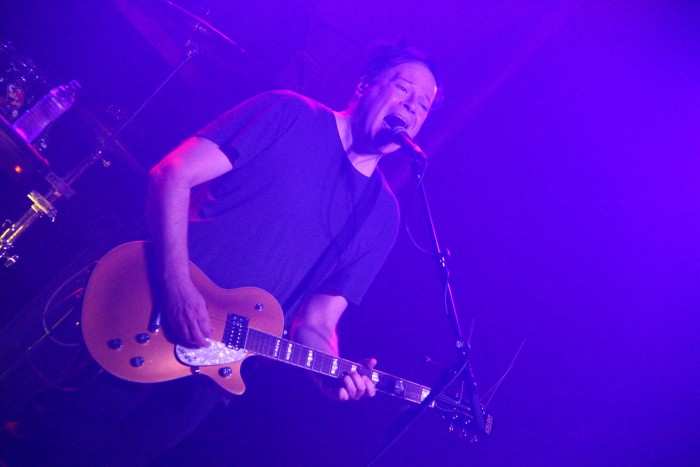 Like fellow Nottingham middle-agers, Sleaford Mods, In Isolation clearly have the scars of life experience etched into their faces and into their music. With a glorious blend of dark, 80s English goth-pop, and the angular strangeness of Interpol, In Isolation produce song after song of brooding loveliness. Berlin, and Truth and Dare in-particular showcase a band who can produce tunes to slow dance with the love-of-your-life to, and lyrics to painfully luxuriate in when your heart’s been broken.

In-fact, the only slightly disconcerting thing about the group, is guitarist John Berry’s frankly supernatural resemblance to actor Bill Nighy. Faint audience mutterings of ‘is that the bloke from Shaun of the Dead?’ and ‘oh, I’m glad Bill Nighy’s hands are better’ prove that If ever a band member needed a T shirt that says “I’m not Bill Nighy. Fuck off!”, it’s John Berry. 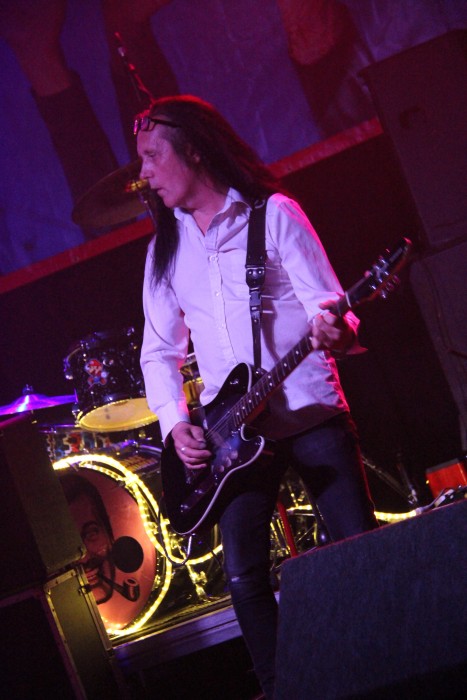 Actor confusion not withstanding though, if In Isolation’s upcoming LP is even half as good as tonight’s live performance, it’s going to be a corker, and will hopefully propel the band towards the level of success they deserve.

In the moments before Cud hit the Rescue Rooms stage, I’m a trembling, expectant bag of nerves. With three albums that have for a long time occupied a place in my own personal top 100 (the magnificent debut, When In Rome Kill Me, the shoulda-sold-a-million, Leggy Mambo and the pure-pop Meisterwerke, Asquarius), Cud are one of the few bands, where a half arsed/doing it for the cash performance would more than likely make me weep, and feel compelled to indulge in some rampant vinyl/CD smashing and burning. Christ! I needn’t have worried though, because from the get-go, the Cud band are on magnificent form. 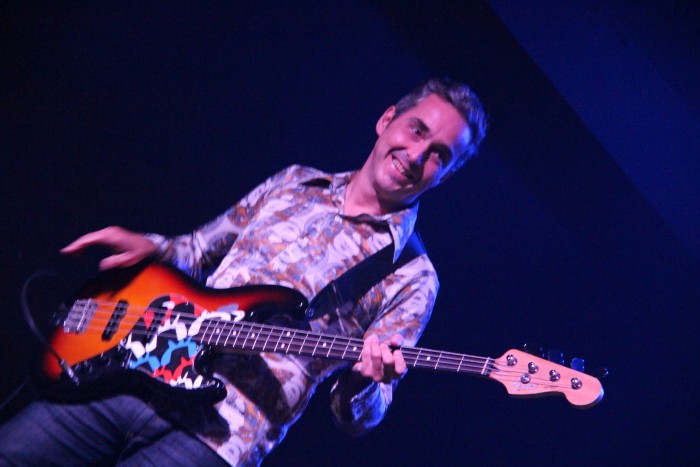 By any yardstick, Asquarius is a brilliant album, but tonight, Cud polish up every track from the LP, making great songs absolutely outstanding ones. From the jaunty jangle of Rich and Strange through to the grinding amphetamine rush of No Smoking, each tune sounds as fresh as the bleating of a new born lamb.

As good as the band sound tonight though, in some quarters, they’ve still casually dismissed as the archetypal indie shmindie band. I only wish some of these cloth-eared doubters were here tonight, as you’d have to have a heart made of of dog shit, fag ends and broken glass not to shed a tear at the rather beautiful Once Again. Cud may at times be daft as a fucking lorry load of brushes, but they have more soul and pizzazz than most of their last century indie peers, and indeed, a lot of guitar bands working today. 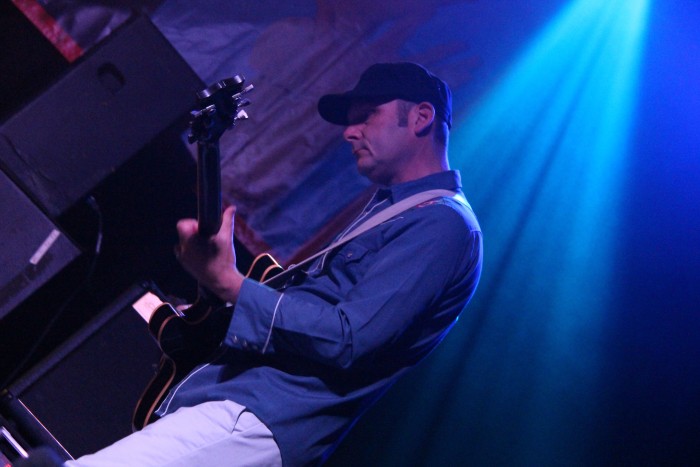 With the complete Asquarius run through done and dusted, Cud reach even more dizzying heights with a second set consisting of non-Asquarius singles and album tracks. Fan favourites such as Hey Boots, Heart and a monstrously good Only a Prawn in Whitby, get the audience twitching like a St Vitus Dance survivors group, but it’s an epic I’ve Had It With Blondes that impresses most – both sonically and visually. As vocalist Carl Puttnam yelps out ‘I was a teenage stamp collector, I’d lay on my back and you’d stamp on my face’, you can’t help but be impressed by a voice that’s part Pavarotti/part furious wildebeest, and by a stage persona that needs to be witnessed to be believed. 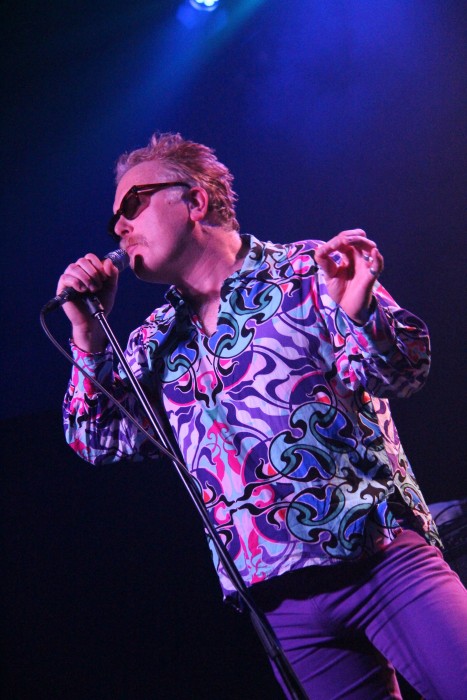 Has there even been another front man quite like Carl Puttnam? Resplendent in a pair of bright purple, skin tight trousers, and a migraine inducing shirt, the Cud singer hurls himself about the stage with the litheness and energy of a much younger man. Whilst Puttnam’s midriff may be that of a chap in his late forties/early fifties, his buttocks appear to have been stolen from Michelangelo’s David and surgically grafted directly on to his body. Move over Kim Kardashian, the finest bum cheeks in show business belong to a middle aged bloke from Leeds, and look like they could probably pulverise walnuts into a fine dust. Blimey!
The rest of the band look to be in fine fettle as well, with bassist William Potter and guitarist Mike Dunphy looking like they’ve not aged a day, and relative new boy – drummer Gogs Byrn – grinning like a naughty school boy throughout the entire set. 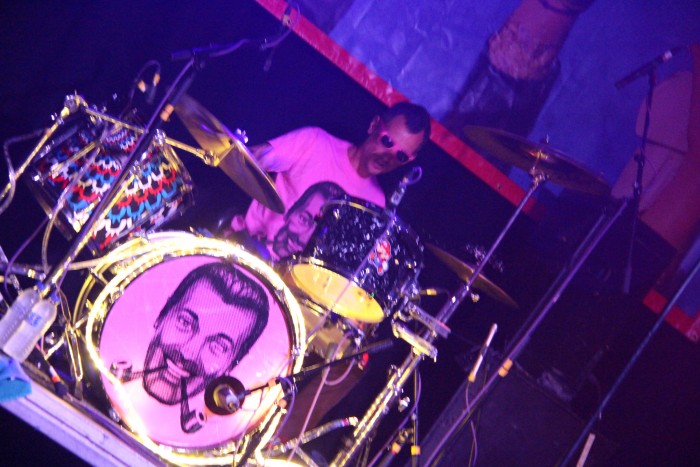 After a frenetic encore of Bibi Couldn’t See and Push and Shove, the band finally leave the stage to rapturous applause. It’s fair to say that an audience consisting of mainly 40somethings, have – for 90 minutes at least – been transformed into gurning, sweaty teenagers. Are the happy vibes all down to pure nostalgia? Maybe to a degree, but it’s also because Cud are one of the few old-school indie bands, that are still as enthusiastic and potent-a-force as they were in their heyday. With a couple of singles released over the last few years (2013’s Louise and 2014’s Victoria), I only hope they carry on gigging and putting out records, because God damn it, I’ve fallen in love with Cud all over again.