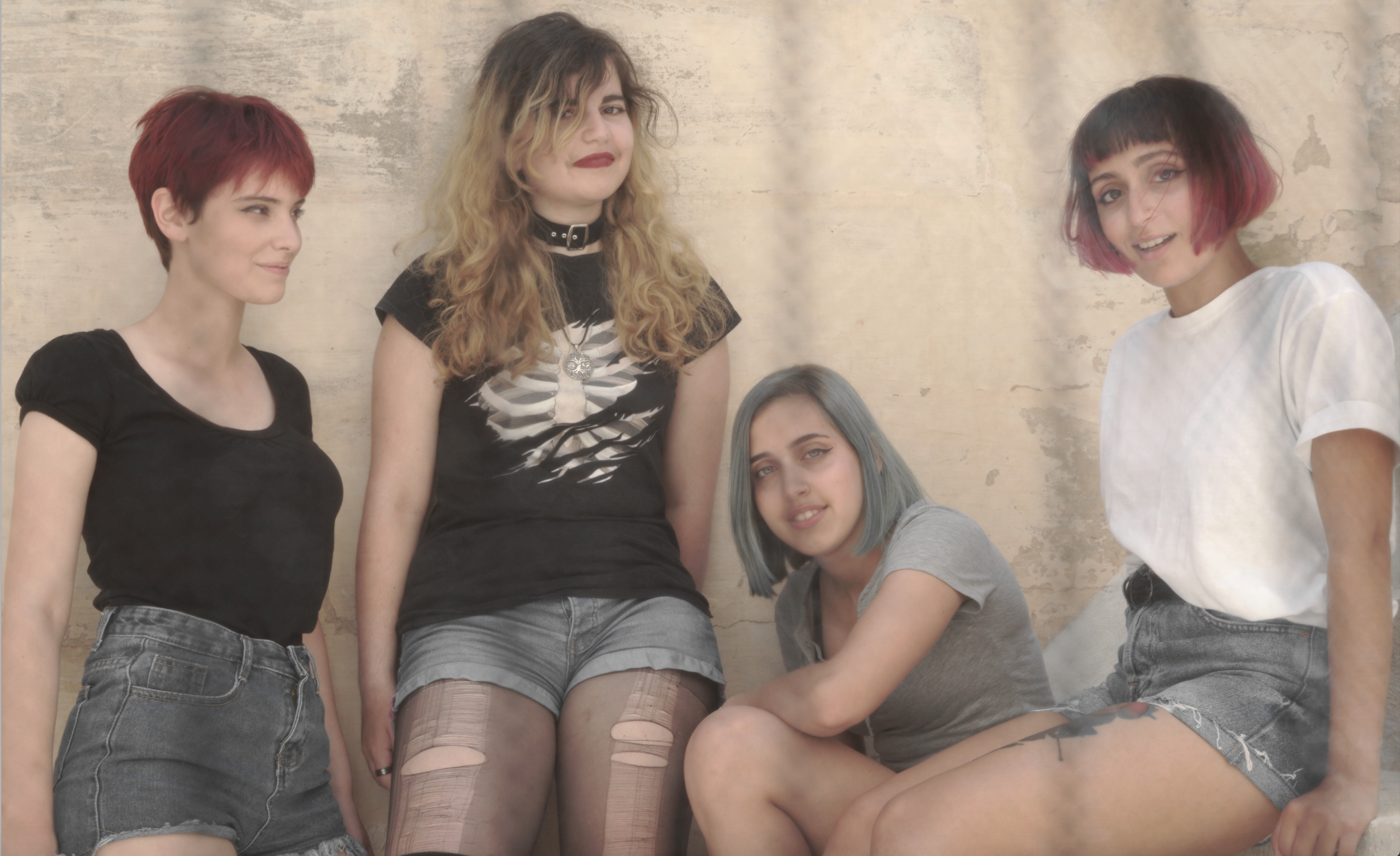 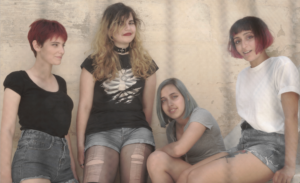 Maltese, all-female, post-punk quartet are currently burning up stages on their UK tour, with shows set for Glasgow, Edinburgh, Dundee, and London. I had the pleasure of catching up with the exceedingly inspiring, Janelle Janji Borg, lead guitarist within the outfit to find out more about the band, their unique relationship together, the music that has fulled their fires, as well as talking about the development of their sound along with changes that has taken place within the band from initially forming back in 2011. Jannelle also gives us insight into Cryptic Street’s forthcoming album, due to be released 2018 as well as her views on women within the music industry.

Miff -L.T.W- First and foremost, the four of you all seem incredibly close, when did you first meet and how was the band formed?

Janelle Janju Borg – Lead Guitarist – Leona (vocalist) and I met when we were uniform shopping for kindergarten. I met Leanne (bassist) at Sixth Form, and I met Michelle through a friend when we were looking for a drummer. The band was founded in 2011, with Leona and I being the only two from the original lineup. The current lineup has been around for a year or so, and it feels like a fresh new start! We are all incredibly close and we’re more than just a band – we’re a girl gang and a family.

Miff- L.T.W- What would you say is the core attitude of your band, and the main purpose of the music you project?

Janelle Janju Borg – Lead Guitarist – I would say that the core attitude of our band is girl-next-door letting loose. The main purpose of our music I would say is ‘be bold and be colorful’…we want to inspire people to be themselves and as Leona tends to say during performances, ‘fuck everyone’.

Miff – L.T.W- What are the main factors that encouraged your shift from Pop/Rock to a more edgier, Riot Grrrrl vibration?

Janelle Janju Borg – Lead Guitarist – We were passing through a lot of shit during the period when we were writing the new songs, as well as experimenting with the new line up. It was a period when people were leaving the band and others were joining in, as well as personal experiences that strengthened the friendship amongst the members of the current line up…I guess you can compare the Riot Grrrrl vibration to our own collective ‘coming of age’ life soundtrack.

Miff- L.T.W – Where would you say you are now regarding the development of your sound? Is there still an openness to explore?

Janelle Janju Borg – Lead Guitarist – Definitely keeping the Riot Grrrrl edge and focusing more of that raw energy in our music, a hell lot of experimentation, and being 100% genuine in what we do.

Miff – L.T.W- From your ‘Stranger’ EP release back in 2015, what has been the key inspirations and motivations over those past two years towards fuelling your spark back into writing material?

Miff-L.T.W- You currently have a three track promo on Soundcloud titled ‘Titty Monster’ can you give us some insight into the recording of those songs? how was the creative process this time around?

Janelle Janju Borg – Lead Guitarist- We recorded the songs at Temple Studios over a week at a secluded studio situated at a picturesque spot in Malta with the amazing David Vella (Rammstein, Siouxie, and the Banshees) as our producer…he is a producer we have always wanted to work with due to his stellar work ethic. His input and his encouragement in the recording process were indispensable. I guess one could describe the creative process as ‘cathartic’ since it was definitely a way through which we could vent off our anger and rage (OohHh scary :P )

Miff-L.T.W- From the mid-eighties, Riot Grrrl rose up in protest at the endemic punk scene sexism, this current material feels very much like its vehemently directed towards the opposite sex, how best would you describe the reasoning, energy, and purpose of your current new material?

Janelle Janju Borg – Lead Guitarist- Well, first of all, we don’t hate men. We very much believe in equal rights and opportunities amongst all genders. I guess this album is a direct attack against all the douchebags out there who tried to put us down in the past, regardless of their gender. The lyrics were written by Leona after some personal experiences which led to the current themes…as I said it was a way how we could express our emotions.

Miff-L.T.W- Do you think women still have to fight hard for space and recognition in the punk/music scene today?

Janelle Janju Borg – Lead Guitarist – We believe that women have to unite as artists and support each other more, in order to truly get equal standing in the whole music industry. Thankfully there are some bad ass female acts who are pushing forward in breaking the glass ceiling… we are living in a very interesting time, and it all starts with implementing action as a united front.

Miff-L.T.W- In my personal view, the power of music transcends gender. I understand both male and female can bring two highly distinctive energies to their performances, however, music has the power to touch all human beings in a profound way. What are your unique views on this? Is there a tendency for both sexes to draw too much focus onto their feminity or masculinity to empower or even manipulate?

Janelle Janju Borg – Lead Guitarist – Gender is an important part of the human experience…even though music should speak for everyone since it is universal in its nature, I guess that artistic expression offers a performative space where femininity and masculinity can be explored.

Miff -L.T.W- What is the music scene like in Malta, are there any underground movements?

Janelle Janju Borg – Lead Guitarist – There is a cool underground movement in Malta and even though it’s a small scene, one can find bands from across the spectrum. There are also some really cool DIY festivals and the scene is active all year round. I highly encourage foreign bands to explore what Malta has to offer with regards to music.

Miff- L.T.W – What have been the highlights of your summer? Parties, festival experiences?

Miff -L.T.W- Whats being on the road like this time around, what bands have you shared the stage with that has made an impact or impression on you?

Janelle Janju Borg – Lead Guitarist – So we just started touring on an ‘international’ scale now…some cool acts we shared the stage with are Ruzzi, Vanessa Zamora, and Emme Woods… we are really looking forward to supporting Acid Mothers Temple this week and PINS in November.

Miff-L.T.W- What artists/bands have inspired and encouraged your vision to create music?

As you can see – our inspirations are all over the place!

Miff -L.T.W- Are there any exciting future plans regarding 2018 in which you can share with us? What can we expect in the future months ahead?

Janelle Janju Borg – Lead Guitarist – Definitely the release of our album in 2018 and our end of your tour!