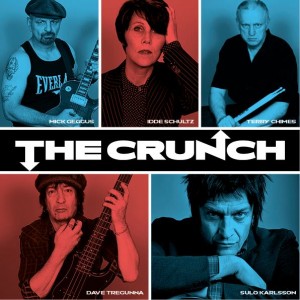 Self-styled power pop rock band, The Crunch, are back in time for the summer with second album Brand New Brand.

Featuring Sulo Karlsson (Diamond Dogs) on vocals and guitars, Mick Geggus (Cockney Rejects) on guitar, Dave Tregunna (Lords Of The New Church/Sham 69) on bass and Terry Chimes (The Clash) on drums, Stockholm’s The Crunch are now augmented by live cohort Idde Schultz on keyboards and vocals. This broadens their sound, though Sulo is still somewhat in thrall to Mr Strummer’s songwriting style, so, if you liked the debut, you’re likely to enjoy this.

‘Limited Edition’ has those ‘stop-start’ Clash rhythms, perhaps understandably given the line-up, though, once again, Geggus’ solo saves the song from veering into mediocrity.

First single, ‘Neon Madonna’ is probably the most different song here. A summery slice of reggae-pop-rock, the chorus is bright and breezy and would sound good on the radio, however unlikely that is in the current climate!

‘Banner Of Faith’, honestly, sounds like Eurovision did when I was young. It’s a tad cheesy, but undeniably catchy. I’d vote for it.

‘Brand New Brand’ treads the pop-rock line that Green Day made their own before overdoing it, though, obviously, Mick Geggus was writing riffs like these when they were literally in nappies. Again, Idde’s vocal addition improves the song no end.

’25 Hours A Day’ is a mid-paced, wave your scarf’ ballad; very old-fashioned but quite pretty in its own way.

‘Solid Rock Steady’ ups the tempo a bit, with Idde handling lead vocals and, to be honest, it’s an improvement. There’s nothing wrong with Sulo’s voice, but it’s hardly memorable and I’d like to hear Idde sing a few more songs.

‘Seeing Is Believing’ is a pleasant pop-rock song with another classy Geggus solo, the kind of song Andy McCoy used to reel off at will.

‘Return To Form’ is more bluster and riff, perhaps just in time. Short and sweet.

‘Save The Glow’ is the best mellow song here; a nod to Ian Hunter/Mick Ralphs in style and mood. Nicely done.

‘Go Back To Go’ ends the album on a bit more venom, although still very melodic, rallying against the ruling classes.

There’s a continuity here perhaps due to the band having more focussed recording sessions this time around, rather than being recorded ‘here and there’, and it’s undoubtedly better produced, but it’s a little too polite overall, a bit too clean and nice. However, as an album of mature pop-rock, it works well and you can only judge an album by its own genre, so do give it a chance if the slicker end of pop-rock is your thing.