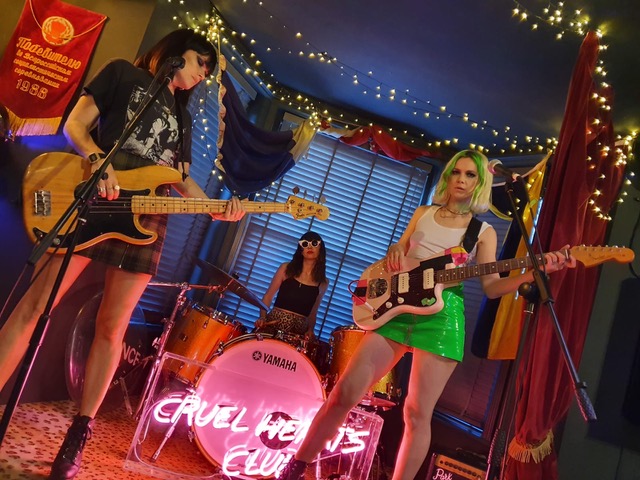 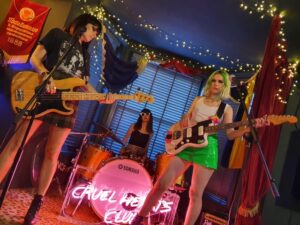 A guitar riff drenched in distortion opens “Dirty Rotten Scum,” welcoming us back into another era we might all be longing for. This new single from Cruel Hearts Club gives us what already feels like a radio hit dream in the mid-90s.

Cruel Hearts Club is a London trio of women who absolutely rock. The band continues to pay homage to the women rockers who came before them while blazing a new path forward on the music scene. The Muffs, Hole, the Breeders, Garbage, Elastica, and Cruel Hearts Club. Of course, this isn’t the first time the band has conjured sounds of some of the greatest women-fronted grunge bands of the past. Previous singles like “Suck It Up” and “Blame Me too” generate waves of nostalgia, a welcome gut-punch from a lost time and place.

“Dirty Rotten Scum” is deeply personal in its emotive lyrics—it’s hard to imagine writing those words without knowing them, feeling them. At the same time, it’s one of those grunge ballads that invites its listener in. The lyrics offer flashes of memories that aren’t your own, yet it’s also just a longing love song for the decades. Gabi’s drums take over in the bridge while Edie belts out the secret to all the grunge love songs we know: “I’ll write songs about you, and it won’t be pretty.”

The new music video, accompanying the single’s release, features typography that underscores the emotional, violent quality of the lyrics. The words “Dirty Rotten Scum” look as if they’ve been hand-scrawled into the film strip of the video, leaving only the blank space beneath.

Nostalgia also emanates from the music video. Recalling the Smashing Pumpkins’ video for “1979” (back in 1995, of course), the characters in Cruel Hearts Club’s video steal into a convenience store, framed by store aisles and punched-in takes that fragment the scene. Tungsten light fills most of the shots, and the pinks of the setting sun creep through to reflect the lyrics as Edie sings, you set my world on flames…

The fashion is also everything vintage you’re seeking from your new favorite 90s rock band. Fishnet tights, choker necklaces, leather mini-skirts, lace-up boots. A neon pink light that bears the band’s name stands among Edie, Gita, and Gabi like a fourth member of the group.

This new single should cement the band as one of the most exciting grunge-pop trios to look out for when touring starts up again. Cruel Hearts Club will be supporting Sting at his London Palladium residency in 2021. In the meantime, watch the new video, stream the song, and check out the merch.

“Dirty Rotten Scum” was produced by Carl Barât of The Libertines, mastered by Miles Showell at Abbey Road Studios, and published by W Songs (Warner UK).