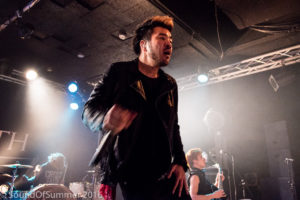 Japanese metal monsters Crossfaith are back in the UK with support from the One Hundred and Counting Days.  The show rolled in to Portsmouth’s Wedgwood rooms on St. Patricks Day and Alan Ewart was there to see the roof blown off.

Portsmouth’s Wedgwood Rooms is a small venue with great sound and a fantastic atmosphere and I was itching to make the 60 mile journey along the South Coast to catch the Japanese Electonicore outfit on their latest UK venture.  Crossfaith are joined by one of the UK’s best up-and-coming bands, The One Hundred.  As seems to be the norm these day a third band, Counting Days was also on the line up.  After this weekend Counting Days drop off and the Qemists join the rest of the tour so if last night was anything to go by this has all the makings of a killer tour.

I arrived in Portsmouth only to have a nightmare parking and on arrival found the venue closed.  Sadly I was told, Counting Days were unable to play so the venue was opening late.  I did think it somewhat odd that the two remaining bands stuck to their set times rather than extending their sets to fill the hole.  To be honest though that was the most minor of irritations on what was to prove a stellar nights entertainment.

The One Hundred were first up.  If I’m honest I am much more familiar with them than I am with Crossfaith so I was really looking forward to their set.  They did not disappoint.  The One Hundred are one of those bands that do not fit into any genre, they fuse metal, hardcore, hip-hop and electronica into a package that is pretty much unique.  Think Limp Bizkit, a touch of RHCP and a dash of Lamb Of God and you will be somewhere in the ballpark. 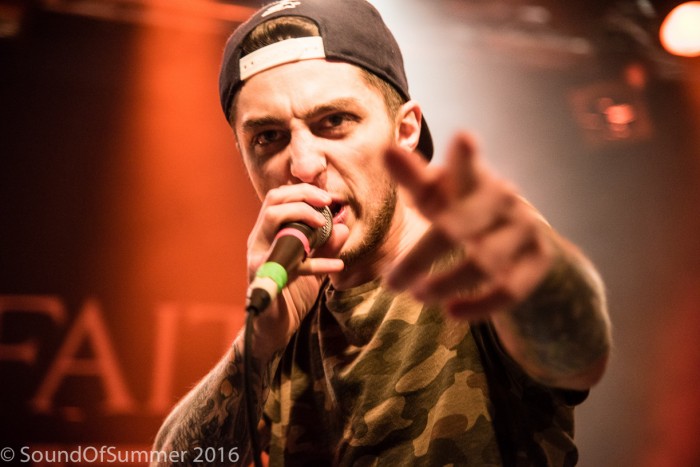 Lead by frontman Jacob Field these guys play like they really mean it.  Field is full of punk-rock swagger as he bounces around the stage like like Ian Curtis on speed.  The One Hundred smashed their way through a 10-song set with the energy and precision that would shame many a long-standing band.  I have seen the One Hundred on a number of occasions over the past year and they get better with every show.  These guys are going places, they cross genre’s and have a very broad appeal and as such they occupy a sparsely populated corner of the market.  They are fresh and exciting and they totally smash their way out of a music market dominated by the bland and featureless.  I have been saying for some time that the industry is currently dominated by the appalling, sadly I’m old enough to remember the last time that things were this bland.  The early 1970’s before punk rock arrived to save us all.  It might just be that we are seeing the rise of a new counter-culture

So on to the main event, Crossfaith.  The One Hundred were the perfect foil for Crossfaith as their are some similarities in their sound. There is certainly the same fusion of metalcore with electronica.  Koie Kenta is a great focus for Crossfaith as is keyboardist Tamano Terufumi who happily leaps to the front of the stage to deliver his vocal parts.  The whole band is a study in energetic output but special mention must go to drummer Amano Tatsuya.  Put simply Tatsuya is the best drummer I have ever seen his hand speed, drumstick tricks and sense of rhythm is quite incredible, he is a spellbinding performer. 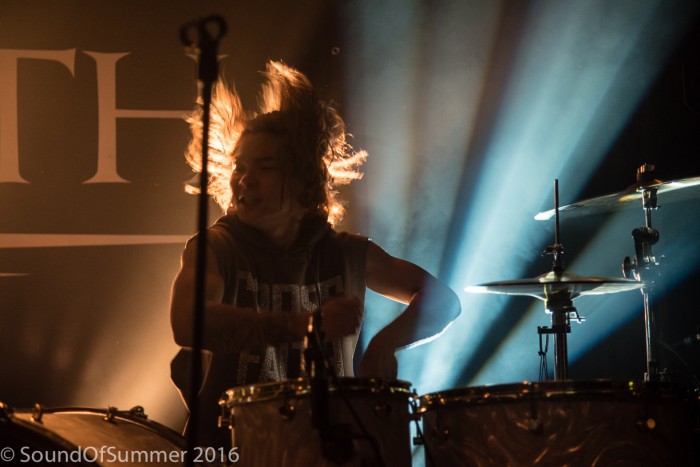 Throw in bass player Ikegawa Hiroki  who took the stage smothered in green paint that was soon running down his face, and guitarist Takemura Kazuki and you have a formula for a winning combination.  When Crossfaith play you don’t know where to look.  Your focus shifts from player to player as the team flashes through a stunning set.  The sound was absolutely impeccable and this was metal played as it should be, loud enough to shake the rafters.

Kenta in particular allowed the crowd no rest as he whipped up the mosh pit.  We had circle pits, walls of death and a crowd bouncing along like their lives depended on it.  I was glad that I had my cameras with me as I nearly died in an Enter Shikari mosh pit a couple of weeks back.  It may be the case that these old knees don’t allow me to bounce like I would have twenty years ago but there is nothing wrong with my eyes or my ears and both loved everything Crossfaith could throw their way.

This was a stunning nights entertainment.  I may have known little about Crossfaith before last night but you can be damn sure I will be following them with interest and frankly you should too.  This is rock music at its roof-shaking, ear-bashing, sweaty finest. Crossfaith are a fantastic band at the top of their game who are simply blowing crowds away.

Tickets for some of the shows on this tour are still available, I urge you, nay I beg you to give Eastenders a miss and get yourself out to wheresoever this magnificent band are playing.  You won’t regret it.  Make no mistake, Crossfaith are the real deal.

The Crossfaith tour continues across the UK through until the end of March  Check for tickets on Ticketmaster or Ents 24.