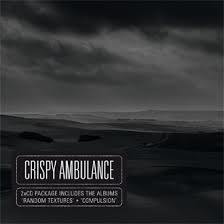 Brand new LP by the Post Punk legends Crispy Ambulance produced by 808 State founder Graham Massey, packaged as a bonus with 2014’s “Compulsion” which was given a limited release on Record Store Day 2015…Ian Canty reviews the latest effort by one of his top three bands of 1980 (the other two were the Young Marble Giants and Cockney Rejects)….

What’s in a name? Well for Crispy Ambulance, the name is far better known than the band, which is a real shame. Lets make up a statistic – say, for every 1000 or so people who have heard of the band (mostly through snickering at it on some “Top 10 Funny Pop Group Names” list) only one person has actually heard their music. Of those which did manage to listen to them, a fair percentage lazily wrote them off as Joy Division wannabes, presumably because they were from Manchester and on Factory. Which is strange because (a) they didn’t actually sound much like them at all and (b) Crispy Ambulance were on a brilliant run of creativity all through their original incarnation, culminating with the truly excellent “Plateau Phase” album.

Of recent years they have played some gigs which aired that early material which have been rapturously received by their fans and outrageously good: I saw them at the Lexington in 2014 and it wasn’t just a “hair standing up on the back of your neck” moment, it was like that all the way through the set. Though these concerts were a triumph for them, they also posed Crispy Ambulance a problem….now that they were ready to record new material, how would they provide themselves with a clean break from the past they had successfully evoked so recently? Well in this case, they decided for their new LP “Random Textures” it would be (almost) abandoning vocals altogether…..

The sleeve-notes point to the pieces presented here as having a “soundtrack” quality and whilst this is true it is difficult to discuss the album’s individual tracks as they seem to make much more sense when taken as a whole. Instrumentals bleed into each other, sharing elements of the same theme before veering off in another direction entirely. The lack of vocals accentuates the verve of the instrumentation on show as Crispy Ambulance go right back to the early days of Post Punk but also manage to mash in Eastern and Folk influences. This LP ebbs and flows, dodging down one musical alley, sometimes staying with a particular theme for a while, sometimes quickly moving along to something fresh. On occasion they do sound a little like PIL, but a bit less bass heavy, like on “Karpadia” where shards of guitar noise bounce off milk can percussion, with some kind of unsettling wail in the background. This is the perfect meeting point to what the band are pushing on towards and their original values. Because they have never really relied on vocals that much in the first place (even in their heyday Crispy Ambulance was as much about insistent, repeated musical figures and restrained instrumental power as it was about the vocal input) they’re actually not missed that much at all.

A Hip Hop/Heavy Dub mix gets us off to a flying start with the dance rhythms on “Integra” and “Allegro” and it all comes to an end with the synth heavy Electro of “Leviathan” and “Red Texas”. In between we are taken though brooding mood pieces like “Prostis” and the “Hauntology-flecked with Krautrock” of “Drifter”. But as I said previously it isn’t really about the tracks on their own, it is how they work in total, like a “real” album in fact where everything relates logically despite the range of differences in the sounds presented here. The title “Random Textures” is a bit of a red herring for me, as Crispy Ambulance carefully select rhythmic ideas and melodies from a wide palette that dovetail perfectly with their core values of repetitive and addictive musical motifs. Now something wholly instrumental may put some off and probably isn’t everyone’s thing, but if you have an adventurous ear and are well-disposed towards Post Punk you will find a lot to love here.

The accompanying 2014 LP “Compulsion” finds the band exploring some of the material that was written and performed live after “The Plateau Phase” but never recorded. After the first disc’s plunge into the uncharted waters of future, this could be viewed as a step back, or more accurately seeing as it was recorded 2 years ago, a last look at their amazingly productive time in the early 1980s. Though obviously featuring more in the way of “songs” than the preceding album, “Compulsion” still has its share of meditative, hypnotising and beguiling groove-led instrumentation. If Crispy Ambulance here on “Stay Shape” effortlessly role back the years and the tribal drums/keyboards/rolling bass of “wmtp.2” are a treat, they also pre-shadow “Random Textures” on “Nightfall Ends the Ceasefire”. “Open Gates Of Fire” is a real Post Punking pearl too and the remix of “Four Line Whip” closes things off with a massive synth-enhanced dance stomp, the influence of Graham Massey transparent.

“Random Textures” proves to me that the Ambulance are back in a business they have a monopoly on – weird sounds from outer space, outta Manchester. “Compulsion” is a lovely bonus and a quality record in its own right. Take this trip underground, soon.