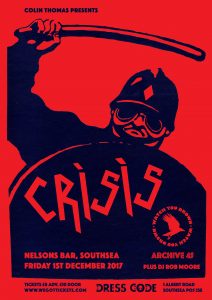 Tony Wakeford talks about Crisis – the past, the present and the attempts to retrospectively de-fang and de-politicise punk.

Interview conducted by Russ Bestley for Louder Than War.

Two particular songs on the EP, Holocaust and PC One Nine Eight Four, set the tone, blending intelligent, reflective and highly politicised lyrics with melodic and angular music. The group played Rock Against Racism and Anti Nazi League events, building a no nonsense reputation as a politically charged left wing punk band who spoke from the heart. In November 1978, they were invited to record a John Peel session. Two tracks from that session, UK ’79 and White Youth, were subsequently released as a single on the group’s own Ardkor label in 1979, with the other two songs, Alienation and Brückwood Hospital appearing a year later, along with the mini album Hymns of Faith.

The group played their final gig in their hometown Guildford, alongside Magazine and Bauhaus, on 10 May 1980, then disbanded. Bassist Tony Wakeford and guitarist Douglas Pearce formed the critically acclaimed Death in June, while drummer Luke Rendle went on to join The Pack and Theatre of Hate.

Original bassist Tony Wakeford has reformed a new line-up of Crisis, and the group are set to play gigs in the UK and Europe over the coming months. Russ Bestley caught up with him for Louder Than War.

LTW: Crisis originally formed in 1977, releasing just three singles and a mini album by the time they disbanded in 1980. The band is now back together and setting out to tour again after a 37 year hiatus – can you tell us why you decided to reform, and why now, at this particular point in time?

Tony: We actually formed in 76 but only got into seriously rehearsing in 77. My first love musically is playing bass, and was a major reason why I put 1984 together. It became increasingly obvious that there was major interest in Crisis and that the band and songs held a special place in people hearts and not just in the UK. I have to thank Mark Geraghty who encouraged me to put the idea of properly reforming the band into practice. There is obviously a growing interest in that period, with a lot of bands reforming. There are some great bands and, it has to be said, some not so great. Crisis were an important part of that history, and I think the band sound fresh and the songs are still valid, perhaps even more so today. There is also an attempt to historically de-fang and de-politicise punk.

LTW: Who is in the current line-up of the band? What are their backgrounds?

Tony: Clive also plays guitar in ATV. Lloyd our singer has a band called Naevus, and Igor is a multi-instrumentalist in autorotation, but he learnt drums playing in punk bands in Serbia.

LTW: Crisis achieved something of a legendary status in UK punk history – those early records fetch very high prices on the collectors market. Why do you think you gained this kind of recognition?

Tony: Partly it’s because we broke up before we had the chance to sell out. Frankly, we were a genuine part of that scene… and live we were… memorable, for both good and bad reasons. 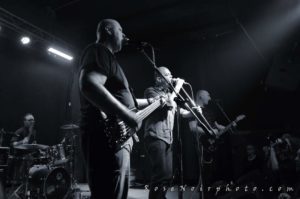 LTW: The band’s politics were always front and centre within the songwriting – in fact, Crisis were one of the very few politically outspoken punk bands of the era (in contrast to the generally vague posturing that underpinned much of the wider punk scene). Did that outspokenness present you with any particular problems – or opportunities?

Tony: Well you never had to look very far for a fight at a Crisis gig. We were certainly at the cutting edge of things. I don’t have any regrets regarding our stance, but I think Crass were proved correct in that they were political but never ended up as apologists or tainted by the actions of political parties. We became too closely identified with a particular party or political current.

LTW: Musically, those early singles are still quite remarkable. They still sound quite contemporary, nearly 40 years on, and avoid some of the stereotypical stylistic clichés of so much ‘punk’ music. There are similarities to Gang of Four, Mekons, ATV, Wire and others who were retrospectively credited with developing a ‘post-punk’ aesthetic and approach. Were you conscious of the uniqueness of the Crisis ‘sound’ at the time?

Tony: Not at first, but it soon became obvious. I think Lester was a very good guitarist, which gave us an immediate advantage. Also none of us were morons, which can also help!

The band’s graphics were also very powerful. Some (like the cover for the Holocaust 12”) drew directly on graphics created by Atelier Populaire during the May ’68 uprisings in Paris, while others featured similarly hard-hitting simple line drawings. Who was responsible for the artwork, and was it a conscious decision to try to reflect the content of the songs within the visuals?

Tony: Flea our roadie did a lot of the early artwork, and later Doug. I have the artistic ability of a brick so it was certainly nothing to do with me.

The legacy of Crisis has been impacted to an extent by subsequent groups that original members were involved with during the 1980s, and by a perception of dramatic changes in political direction. There is still some background ‘chatter’ on this topic in regard to the upcoming tour. How do you feel about that, and is there anything you feel that needs clarifying?

Tony: Not really. I have made my position crystal clear over the years. Crisis were an antifascist band. They still are. I was told there were a few keyboard warriors whining before the Dublin Castle gigs. Of course, as usual it’s behind your back and nothing happened. Real antifascists have more important things to deal with. Anyway, I’m not hard to find, if you have a problem, say it to my face.

All we have had so far is an amazing reaction from original fans of the band and those discovering the band. If I thought we couldn’t do the songs justice and were simply a sordid tribute band going through the motions, I would never have done it. I think the audience would have let us know pretty quickly as well. Crisis fans are not famed for their quiet reserve.

Upcoming gigs, with more to be confirmed: