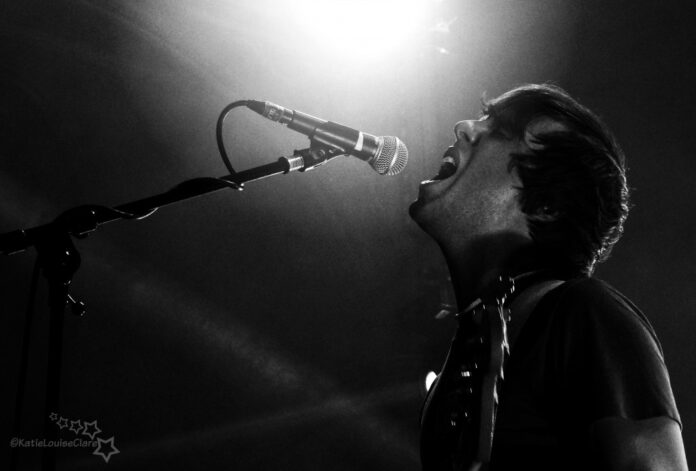 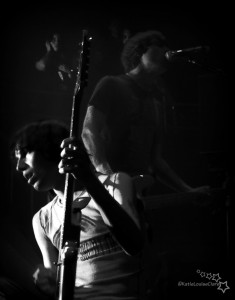 The Cribs + Pulled Apart By Horses

Wakefield indie oiks The Cribs descended on Manchester’s Albert Hall this week. Louder Than War’s Katie Clare was there.

Pulled Apart By Horses supplied a quite frankly supreme tour de force: A performance that honestly had every fiber of your body scrabbling for some tangible definition to explain the state of awe you find yourself trapped in throughout (your body seemly moving without conscience decision).  By the time Rob Lee almost brings down a stack of speakers at the side of the stage he’s leapt upon while simultaneously thrashing improbable sounds from his bass  – Tom Hudson is taking the trust challenge turning his back and falling complete with guitar into the audience; sending the road crew and security running to prevent synchronized disasters.

There is no such thing as a mediocre Cribs show and tonight at Manchester’s truly exceptional. The Wakefield trio continue the trend, managing to make the vaulted ceiling hall and balcony feel like an intimate, dimly lit, sticky floored dive bar: admittedly with premium acoustics. Opening with Ancient History there is a wall of noise that at the front is barely definable however by the time their half way through I’m a Realist the well-oiled machine of vocals, instruments and the thousand strong back up songsters clicks firmly into place.

Tracks from the bands sixth album For All My Sisters have already established themselves in to the bands truly copious catalogue of options and whilst Different Angle, Finally Free and Burning For No-One certainly supply a delicious display of the bands progression, fuzzy frenetic melodies  and emotionally raw lyricism play about with the more polished production. Just as Men’s Needs. Hey Scenesters and Mirror Kisses once were new, shiny and not part of a shared past, the new tracks have that particular Jarman magic a plenty and it is only a matter of time before they’ll be filling hearts as their intro kicks in. 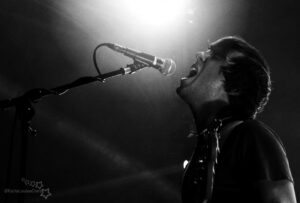 “Manchester has always treated us as one of its own and tonight might be the best show we’ve ever played here.” Imparts Gary the crowd vocally share their accord. The energy from band is palpable the audience feeding on it and multiplying is 100 fold and as we fly though blistering versions of Shoot The Poets, Mirror Kisses and Men’s Need’s anyone would be forgiven for flagging on the final track (considering this too is from the new album) but the kaleidoscopic striking undulations of Pink Snow carrying everyone along on its waves of tenderness and peaks that tease but don’t quite reach momentum: ambient punk to wind down a little after the frenetic endeavour’s prior.

Developed, evolved, grown – whatever; They’re The Cribs and they’re awesome.

The Cribs UK tour continues (see dates below) for full information about each one, including how to buy tickets, head over to The Cribs official website. They have a Facebook page plus they tweet as @thecribs.