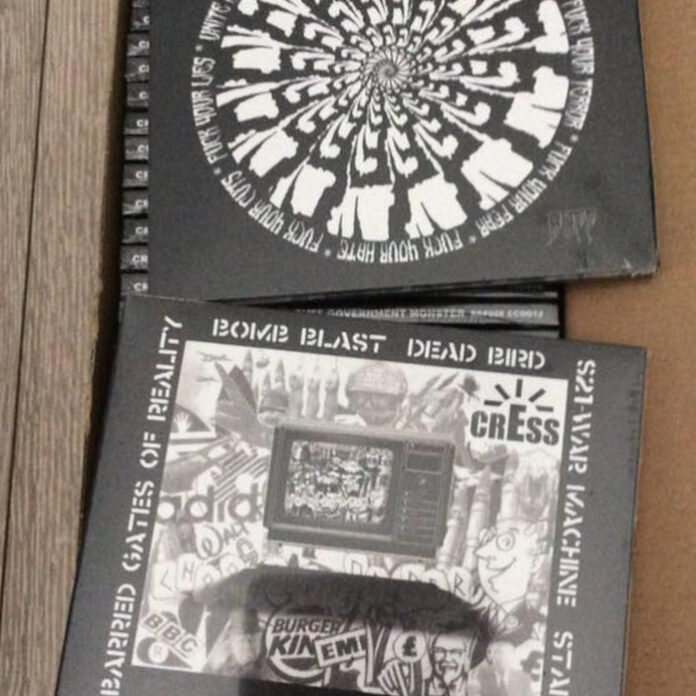 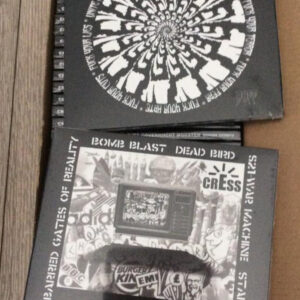 In a year when festivals and gigs have been shut down, up pops this album that deserves to be heard live in a field in the middle of nowhere. To me it’s like someone has distilled the soundtrack of a free festival. Punks is hippies. It’s possible that there may be a few free festivals in far flung corners of forests or mountain valleys but you’ll have to be lucky to find out. So in the absence of those beautiful care free moments, cart your sound system out into the garden, load up your pint or pipe and stick this album on.

Cress have been around for ages. To the initiated they need no introduction. I remember their first LP, and early appearances at punk’s picnics, attracting a huge amount of interest. Here is a band who sound like Crass due to the militaristic beats they have programmed into their drum machine, HAL2000.

While the drumbeats are pure Penny Rimbaud, the guitars have a heavier touch. Vocals career between anarcho-punk dead-pan polemic and a hint of crusty gnarl (Crassty?). The sound is further expanded with samples and effects. One thing about the last 25 years or so of Cress is that they are consistently good.

Kicking off with samples about the war on terror and other sinister government actions, The Barred Gates of Reality starts off slow. A sermon against the state and the government, in favour of collaboration and love is preached over downstrokes.  You can watch it in a Facebook video preview here.

Bomb Blast ups the tempo as it kicks in with the familiar Crass influenced template. A call to action and resistance it deploys a phaser pushed to its limits. Those of you who remember Cabaret Voltaire’s Nag Nag Nag will have experienced this trick before, but its purpose here is to sound like a descending bomb.

Gaps between songs are filled with samples of news reports from the Battle of the Beanfield, which helps give the release an overall “theme”.

The Cress side of the album closes with a very mellow acoustic guitar instrumental complete with sonic sounds that could have been lifted from a Hawkwind album. Then just as you feel ready to drift off, they kick you in the face with 2 bonus covers of well loved anarcho-punk songs (no spoilers here). While one sounds somewhat bontempi-esque, you have to forgive Cress for indulging themselves. The messages these songs convey still resound after 4 decades.

Buff sit in a space that I absolutely love. They’ve got the politics and some of the aggression of anarcho punk. They have punky riffs and a grungey guitar. But they also have the mid-paced rocking drums and wibbly wobbly effects of space rock (a la Hawkwind). Crusty music for crusty people. Purist hardcore kids won’t like it, but they don’t need to. Some festival goers may find it a little too confrontational, but this isn’t for them. They can go to the Easy Listening Field.  In occupying this niche, Buff are arguably the successors to 2000DS.

In a proper thrashy punk number, Class War lays bare in 1 minute and 40 seconds the class war that is being waged by the rich “upon the vulnerable and poor”. Grenfell, bedroom tax, benefit sanctions…they’re all in there. Not to mention the cover up of paedophile rings!

Free Party People sounds like a free party, with its skanky and atmospheric start. Launching skwyard with a proper wandering bass line there’s a touch of Hawkwind or Ozrics guitar, but the whole time there’s an aggro shouty bloke bringing you down to earth.

Government Monster is the real space rock moment. Lose yourself in the music with that always rhythmic drumming. Floaty effects abound and then towards the end of the crescendo that shouty bastard shocks you into reality.

Tribal sounds like a traveller call to arms, a celebration of difference: “Living in a teepee, living in a yurt, kids running round all covered in dirt…Live in a house, live in a flat, travelling around with a pony and trap”. It’s a belligerent declaration of pride and so is more of a punky affair but with that added psychedelic air. Perhaps aware of the dangers of tribalism, Buff end this one with a call for Unity.

We need that Unity if we are going to challenge the slide towards totalitarianism which we are all seeing unfold. Divided we are conquered, if we get beyond our tribal divisions we have a hope. Perhaps. And the next song, New World Order lays out the industrial destruction that could await if we fail.

It gets worse. As The Stand posits, we are facing “An eco-disaster and its happening now and if we don’t stop it we’re all going down”. Samples illustrate the cultural value of free festivals as a pivotal part of the calendar.  Getting out in the country as a break from the concrete. With the stresses of lockdown, and world politics seemingly controlled by morons and bigots, I don’t think we’ve ever needed those escapist moments of freedom more than right now.

What’s interesting to me is the order of the songs almost tells the story of the stages of the development of the New Age traveller movement in the 80s.

If you’re a punk rocker and you like free festivals. If you used to live in a truck or bus, and if the Battle of the Beanfield is a pivotal point in time for you. You are probably gonna love this album.

Get the vinyl from from Urinal Vinyl and the CD from Chaos Control, and contact Chain Reaction if you’re in the States.

Cress and Buff can both be found lurking on Facebook.