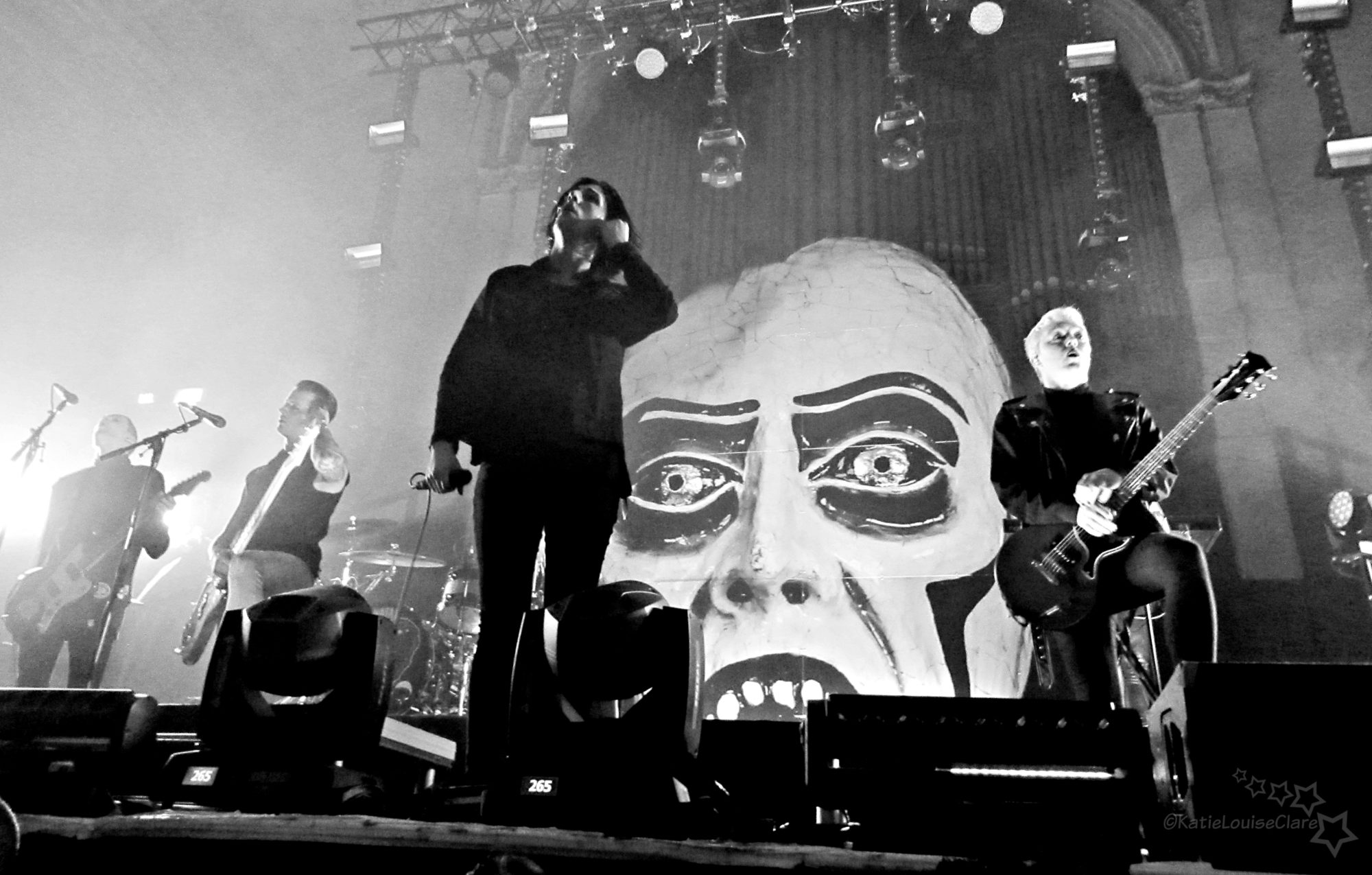 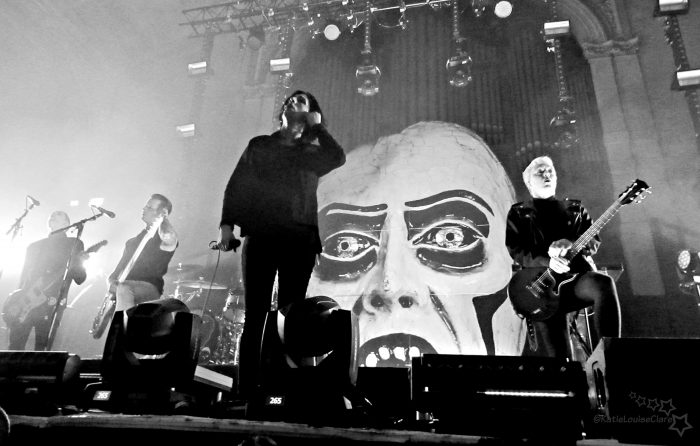 Louder Than War favourite’s Creeper have brought the Christmas cheer this season with a second UK tour to close out 2017.We sent Katie Clare out on a cold and snowy night to experience the band’s Theatre of Fear Tour at Manchester’s Albert Hall.

As the venue and audience sizes continue to rise so does the overall package you get from Creeper. Titled the Theatre of Fear Tour the band are ending the year with a trifold flourish of fantasticalness. As well as the tour, the band have released a three track Christmas EP and a novel based on their own multi-layered narrative which went on sale at the start of the month.

As the doors open first support Nervus are kicking off the night’s delights and doing so in style. The Watford four-piece deliver some serious well-constructed life-affirming yet introspective indie-punk rock. Their all too brief set is scattered with tracks from their debut album Permanent Rainbow (Oh Joy, Bones and Skipping Needle) and the band’s charmingly affable interaction with the audience. Vocalist and songwriter Em Foster has drawn on some visceral life experience to create some emotion-packed lyrics that work superbly in union with the luminous keyboards provided by Paul Eitenne and the resolute rhythmic foundations provided by bassist Karl Woods and drummer Jack Kenny.

Can’t Swim do a fine line in neck damaging firecrackers. Their set is full of tracks that build with a barely restrained urgency, ultimately succumbing to the pressure in explosive conclusions. That is not to say that it’s all killer no filler, the band create layers of grunge, thickly rich bass and well-defined hooks that create a notable ebb and flow throughout. The five-piece New Jersey band do keep their on-stage conversation limited. Lead vocalist, Chris LoPorto, paying the dues of salutation and thanks, in-between his gritty resolute vocal performance. Can’t Swim, quickly find much of the audience’s musical sweet spots; who are correspondingly hypnotised by Danny Rico and Mike Sanchez’s outstandingly skilful guitar performances and engaged with the melodic progressions of Andrea Morgan’s drumming and Greg McDevitt’s bass. $50,000,000, What’s Your Big Idea? Both from their debut album Fail You Again certainly more than hold their own however Stranger, Death Deserves a Name and Your Clothes delivered with the assistance of Microwave’s Nathan Hardy stand out as the most special.

The Microwave dynamic is perceptibly a mature and talent one, however, there is something a little jarring with their hardcore and indie rock meld. This discordance isn’t notable when listening to their releases but in this live setting things seem to be somewhat stuttered. It could be just an off night or something about the acoustics of the venue, as the band are laid-back personified, and there is no hint of technical issues. Microwave’s set is a healthy mix of the old and new. Opening with Drown, what could arguably be their strongest track of Much Love, a stunning start that is peaked again during their closing tracks Grass Stains and Vomit (the finale with vocal assistance from Can’t Swim’s Mike Sanchez). Nathan Hardy’s emotionally twisting vocals skip between the composed and the frenzied his vocals remain almost clandestinely few steps in front the band’s harmonies which again demonstrates the band’s skilfulness.

A tannoy-ed voice welcomes everyone to the 50th Anniversary Tour Southampton World’s Fair 1967 but as the voice crackles and distorts, the venue is plunged into darkness. Flashlights are seen beaming about the stage as a frantic announcement is heard to get the power back. As smoke and limited lighting appear on stage so does a lone man in a purple suit. This is the missing paranormal investigator James Scythe, he delivers a heartfelt frantic cautioning; warning all of The Stranger, there is no explanation of where he’s been. In a plume of smoke, he’s gone again. Madeline the object of Scythes affection or affliction appear in from a gruesome rending of The Strangers face complete with light up eyes and intros Black Rain as the band take to the stage. 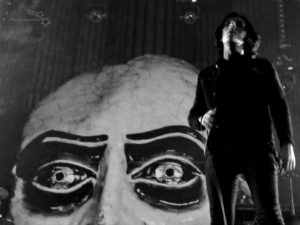 This tour has finally seen those achingly desired track appearing in the set. Winona Forever; the beautiful juxtaposition of joyous melody with lyrics of a lost love – if it was ever indeed love in reality. Room 309 an anthemic visceral punk rock gem, one of the heaviest on Eternity In Your Arms and a stunning way to cut loose. The set is bejewelled with several older tracks The Honeymoon Suite, Valentine and Allergies all sending a steady flow of crowd surfers rolling and bobbing up and over the barrier.

To the chant of “Hannah Hannah Hannah” – Hannah Greenwood takes to the centre of the stage for Crickets. Together with Ian Miles accompanying it is all too easy to be hypnotised by the expressive lyrics, the tracks equanimity is merely physical, the emotions remain amplified. Unbelievably to the non-versed Creeper can and do intensify emotions with I Choose to Live. The acuity of what this track depicts, and means is hard to explain – it is something you can only experience.

Creeper we all know are collaborative, creative they are also welcoming of suggestion as the collective mass in Manchester’s Albert Hall welcome the band back to the stage to a rendition of the soaring I Choose to Live refrain. They then chant “VCR VCR VCR” frontman Will Gould checking with the band all is well and for the first time, this tour VCR is included in the set. The final song as has become tradition, the song of a suffering spirit that “never goes out of style” Misery in delivered and echoed back in perfect harmony.

The Theatre of Fear is a flamboyant yet vital structure within which Creeper can incorporate a rich range of emotions: the luminous to opaque darkness all in the space of 90 minutes. With a final date in their hometown Southampton tomorrow the Creeper creative saga it appears will continue onto 2018 for there are questions to be answered, lost loves to be found and of so much more to experience – you can sign me up now!