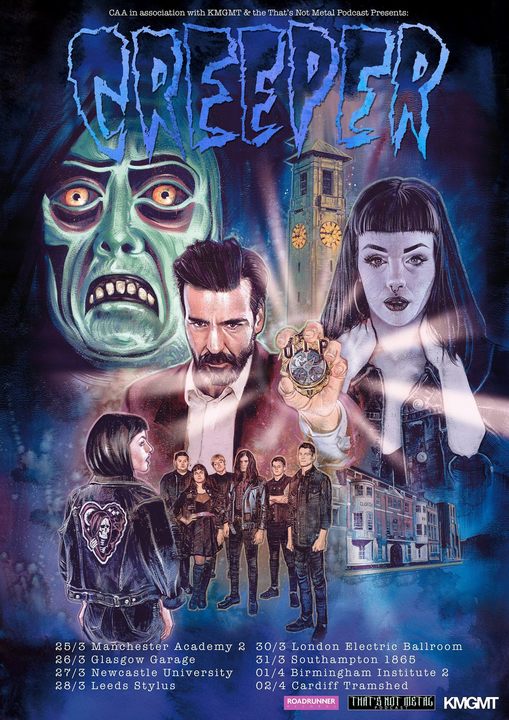 The Southampton six-piece are playing seven dates supporting their debut album, Eternity, In Your Arms, released a mere 24 hours earlier.

Adding a trio of well loved and respected bands for the bill, Creeper have pulled together a lot of firsts in a short space of time, there is a lot of anticipation and it’s very palpable as an excited nervous feeling is in the air, at Manchester’s Academy 2 for the sold-out first night of Creeper’s 2017 UK Tour. 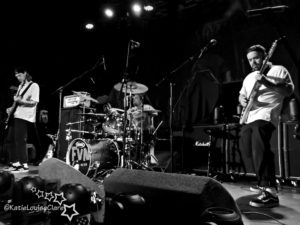 mastered that fuzzy guitar heavy grunge sound revitalizing the ’90’s sound with amped up bursts and a melodious vivacity. It was a brisk yet very solid set highlighting their strengths well: Arabella particularly was stunning, it’s its heavy, chronicle like qualities resonating throughout the venue.

Coming as something of a revelation there are several strong, yet contrasting elements that dominate tracks; a sense of elation along with a sugary melancholy. These features bleed through the noisier foundations and even at their loudest Puppy retain a palpable melodic yet edgy joyfulness. If that wasn’t enough the sheer pleasure of watching drummer Billy Howard animated skilfulness is worth ticket price alone. The night has hit the ground running and the venue has already filled up fast. 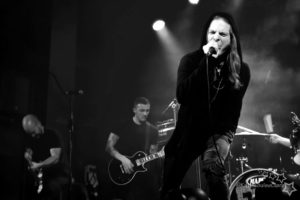 This is Boston-based Energy first live show in the UK as they confidently take to the stage; hard to believe that tonight as they deliver a commanding and tight performance that is both compelling and entertaining. Jason ‘Tank’ Tankerly, a strong frontman who manages to deliver an intense performance that contrarily gently familiarises a new audience to a catalogue of songs that span a variety of emotions through many blended genres.

Dead In Dreamland is a truly beautiful surfs up melody that vibrates with dark, almost chilling lyrics, the audience actively immersed singing along word for word. Energy really are masterful at providing subtle intensities of complexity in both emotion and sound and it really pays off live.no more so than a stunningly performed They.

Milk Teeth take to the stage in front of an audience 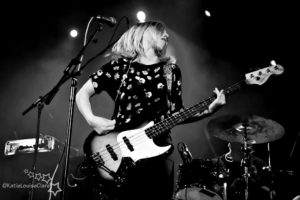 already beyond spoiled in terms of warm-ups, having not seen Milk Teeth live before I was expecting a something of a lull, The stop-start punk thrash grunge along with Becky Blomfield’s almost one level vocals had the crowd moving and shattering any preconceived notions. Brain Food sparks a round of crowd suffers and producing some floor shaking. A peppy and fun set that drew from their debut album Vile Child, seeing these tracks live sheds a newly defined light and a revisit is in order.

With a new backdrop, of an ecclesiastical building its windows menacingly clear through the dry ice and shadows, replacing The Callous Heart. Drummer Dan Bratton and keyboardist and vocalist Hannah Greenwood are elevated on podiums to the left and right respectively. Illuminated crosses bridge the space between them and Oliver Burdett, Sean Scott, Will Gould and Ian Miles who make up a commanding front line. Like the eye of the storm, the spoken introduction of Black Rain fills the space an instant like thunder and lightning the stage erupts saturated with smoke and light the band the song exploding with all its overwhelming heartbreak bleeding into the air.

One first is fast followed by another: Poison Pens colossal riffs enveloping you as you jump along with the crowd all who, are too consumed by this invigorated hardcore rager. Revisiting the Black Mass and The Honeymoon Suite from the third and second EP, the audience with focussed excitement and exhilaration passionately singing along something they do throughout the entire show dispute a third of the tracks being from the debut album release the day before. 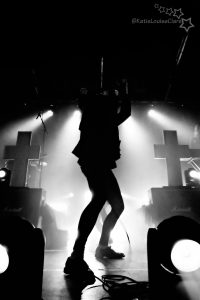 Those new tracks unconditionally do not disappoint and it’s difficult not to get evangelical about them. Down Below is a dark and indulgent fantasy and Crickets with Greenwood, taking over lead vocal the band except for Miles on acoustic guitar leave the stage. Greenwood delivers a flawlessly poignant tale of lost love and trampled confidence, the audience chant Hannah as a sign of appreciation. Crickets demonstrates yet another dimension to this group, who seems limitless in their creativity.

Ending the pre-encore part of the set, Eternity, In Your Arms’ affirmative theatrical closer I Choose to Live is an impassioned sucker punch to the emotions, so powerful it really does require the band to leave the stage giving everyone a moment to take a breath and realise oh no this can’t end this soon. Luckily the band returns to again spin everyone into a whirlwind with VCR and closing on Misery. Creeper have and continue to create, perform music compels you to throw yourself into their special world: a world since Eternity, In Your Arms has exquisitely expanded.

For ticket availability and further information via the links of their official website or by contacting the venue for more options.

Eternity, In Your Arms (Roadrunner Records UK) is available now from the usual retailers.

All words by Katie Clare. Find more from Katie in her Louder Than War author profile.