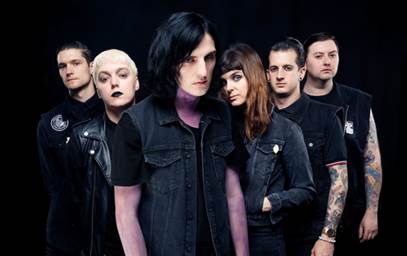 Creepers end of year Theater of Fear Tour kicks of this Sunday, but not satisfied by making their fans holiday season a hot live experience the band have dropped not only a classic Christmas Cover but a whole new Christmas EP.

Celebrating the end of a phenomenal year for the Southampton sextet with the announcement of a new Christmas EP due for release on December 8th 2017.

Creeper have shook the expectation in advance of the first date of their tour, this Sunday at Glasgow’s O2 ABC, by releasing a cover of The Pouges and Kirsty MacColl’s seasonal classic Fairy-tale of New York. Lead singer Will Gould explains the choose “Ever since we were kids ‘Fairytale of New York’ has always been our favourite Christmas song. Shane MacGowan and Kirsty MacColl trading insults in the lyrics and the overall sad tone of the song always appealed to us – we’ve wanted to cover it for some time. Alongside this we covered ‘Blue Christmas’ and our own original Christmas song too. The three songs form something of a miserable Christmas EP. We are really pleased by how it all came out and hope our fans will be too. “

2017 has been an extraordinarily successful year for the bands whose exceptional debut album Eternity, In Your Arms received an enthusiastic critical reception across the board when it was released earlier this year. The album went straight into the Top 20 UK Album Chart, and promoting these emo horror punks right into mainstream consciousness.

A summer spent touring America on the 2017 Warped Tour the band have not rest since returning and have been hard at work working on the not only their Theater of Fear tour, which will take their theatrical presentation to a whole new live level, some secretive filming as well as finishing their first literary release. The fictional novel, based around the characters the band have used throughout a narrative arch present in the second and third EPs and debut album. Whatever Happened To James Scythe?, published by 404 Ink, has been presented as ‘A report for the Ombudsmen of the Preternatural’. The book reopens the case of the mysterious disappearance of the private investigator, James Scythe, who has become a central part of the Creepers unique creativity.

To mark the release of the book Creeper will be book signing in advance of their Glasgow and Southampton dates. The signing will take place at Waterstones Argyle Street from 5pm on Sunday December 3rd 2017. Check the bands Twitter and Facebook for news of further pre gig signings.

Creepers version of Fairy Tale of New York, is a loyal adaptation adding a dash of their own style or rawness, the Will Gould and Hannah Greenwood vocal flourishes paying respect to Shane MacGowan and Kirsty MacColl original. The EP’s contains a second cover a stripped back version of Blue Christmas. The enduring seasonal favourite that was made famous by Elvis Presley and Martina McBride over the years the emotional tale of unrequited love has been covered by a multitude of artists including Johnny Cash, Willie Nelson and The Beach Boys. Creeper bringing an emo vibe that fits beautifully with the maudlin tone of the song.

Sandwiched between the two classic’s on the EP is an original new track, Same Time Next Year? which juxtaposes the dark romance of Gould’s festive-themed lyrics with a soaring anthemic hook.

Tickets are now available for the Theater of Fear Creeper Tour from the usual ticket retailers. Please note that some date have sold out and others may be sold out by the time this article is published. We advice checking Twickets for fan to fan face value tickets – please avoid secondary ticket selling sites.

Creeper will be supported throughout by Can’t Swim, Microwave and Nervus.