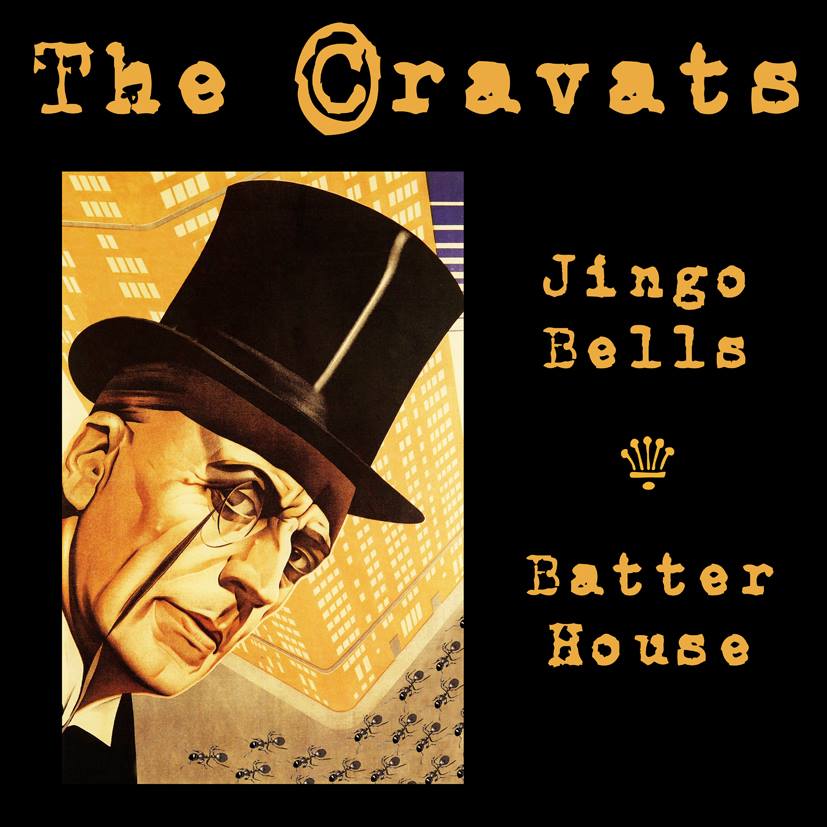 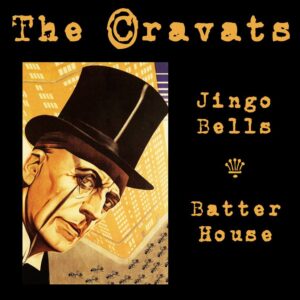 First new material for yonks from Dada-punk Anarcho-Be-Bop weirdos. And it’s every bit as good as their old stuff says Ged Babey.

One of the most bizarre, original and instantly recognizable bands from the waves of provincial punk were Redditch based oddballs the Cravats.

A favourite of Peel and signed to initially Small Wonder and later Crass records, their growling bass and be-bop sax set them apart, as  did their Dada-ist influence and surrealist content.

Overground have re-released all of their material over the years and they gig selectively (Albini’s ATP, Crass Feeding of the 5000 show and Rebellion) and a collaboration with Orbital came out some years back, but this is the first brand new release form the 2016 line-up who are; Co-founder The Shend and original sax-riddler Svor Naan and drummer Rampton Garstang, joined by new recruits Viscount Biscuits on guitar and Joe 91 on bass.

Jingo Bells / Batter House is to be followed by a second 7″ already recorded and an LP due for release by the end of 2016.

As the press release says the songs are;

Still drenched in sax, obliquely angry, raucous and sounding like no other band in existence they have remained faithful to the sound that made them unique. Eccentrically frantic on stage, odd but on the ball on record and definitely not normal, the world needs bands like The Cravats. For now though, it’ll have to settle for just the one.

So here is a 23-second preview as a teaser / enticement to buy!

Both tracks really do retain the Cravats distinctive sound yet sound fresh and freakily ahead of the curve.  What the songs are exactly about is difficult to say.  Jingo Bells is probably about the Ruling Classes keeping the peasants in their place.  Musically it has that disorientating gait and Stranglers Black & White growl.  The dialogue samples put me in mind of the Men That Will Not Be Blamed For Nothing whose satirical protest Steampunk does have some kinship with Cravats surrealist Bebop.

Batter House edges it as my favourite of the two as it’s a mixture of Big Jesus Trash Can rhythms and Right Now type sax and demands you do a punk rock Lindy-Hop to it after a few seconds.

They end all too soon and bode well for the forthcoming album. God Bless the Cravats and all who dig them Daddio.

Oh, and look out for a promotional video due to be exclusively shown on the Vive Le Rock website any day now …. it is said to be something very special indeed….

Live Dates for The Cravats 2016

Saturday 26th March (As part of Get On With It with Hagar The Womb, Culture Shock, Bus Station Loonies and more)
The Green Door Store – Lower Goods Yard, Brighton, BN1 4FQ