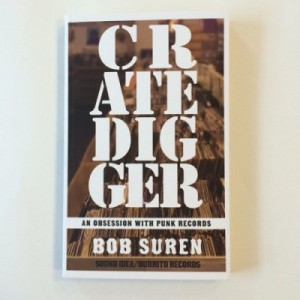 No one could question the member of numerous bands, proprietor of Sound Idea record store and eventually bootleg merchandiser Bob Suren’s commitment to the DIY punk scene. One of his most endearing ideas was the hosting of record meets to swap vinyl in a public park picnic pavilion in his adopted home town in Florida. As he would say to anyone who asked if it was worth coming to the next one : “You wont know if you don’t go”. Great advice for life in general but discovering that one of the records you flogged for next to nothing to fund a rubbish night out was now worth $1000 might put a dampener on the day.

So why did I approach this chronicle of the hardcore punk scene with a little trepidation? Mostly because of the elitism and macho straight edge zealots which often attached themselves to American punk. They seemed more like the jocks who would have beaten up the genuinely weird kids at school.

Bracing myself for tales of squat thrusts with some obscure Henry Rollins clone I was therefore relieved when some of the records that had been the soundtrack to pivotal moments in Suren’s life came from big hitters like the Dead Kennedys, Sex Pistols and Ramones. During his recollection of the discovery of the Ramones the acknowledgement of listening to AC/DC and Black Sabbath at school certainly rung true for me. If a book is designed to make the reader consider their own experiences or more specifically in this case inspire you to dig out old vinyl this book certainly succeeds.

Written in short chapters with tight sentences which mirror the records. Incidents in Suren’s life which are tied to them highlight big issues without being didactic. Sections including his attempts to get into Peruvian hardcore and an at times hair raising trip to Lima highlight cultural differences but how ultimately common ground and the international nature of the punk scene brings people together. Describing MDC as a “brain bomb” with lines like “And there’s no God in heaven, so get off your knees” as the first challenge to a Catholic upbringing and the opening to “Filler” by Minor Threat as his version of a religious experience is rousing but revealing in the light of what unfolds.

His immersion in punk even extending to forming a tribute band for Canadian punk veterans D.O.A. Suren resplendent in a blonde wig for the part of drummer Chuck Biscuits and Pete from the record store perfecting singer Joey Shithead’s head wobble the work of true fan boys. With hindsight he would have made a good merchandising opportunity with one of those bobble head figurine things. Just like the one I have got of Joey Ramone in fact.

It’s easy to laugh but I remember when D.O.A. played my home city and the band stayed at the barman’s flat. His partner less than impressed to have to step over a load of stinking men when going to college the next morning. I on the other hand thinking that once I had got over making embarrassing hung over conversation in the morning it would have been good to say Shithead slept on your living room floor. Indeed one of the more implicit aspects of the book is whilst there are women present in the scene the real OCD sufferers seem to be male. Another particularly taciturn Sound Idea assistant turned up for work and said “Our dog died. Do you want this dog shampoo?” without making any reference to the deceased mutt again.

Using the vehicle of a Misfits album Suren introduces the reader to a prime mover in the south Florida scene called Dave Rat. Now it seems compulsory for every town’s punk crowd to have a Rat but this one seemed particularly influential in introducing and welcoming Suren to the fold. He was later stabbed to death trying to do the right thing by breaking up a fight at a gig and Suren writes movingly about him.

He also highlights the generational nature of a movement which now has a history long enough for him to fulfill a similar role with people he describes in terms of being family. Ultimately however it is his immersion in this scene which leads to difficulties in his personal life. This doesn’t descend into “High Fidelity” mawkishness but the end of the book makes uncomfortable reading as his need to distance himself from punk ironically seems reminiscent of documentaries where people have escaped or been rescued from religious cults.

It may seem counter intuitive to highlight this in a book about “punk records” but this is reflected in the contents where one of the only bands which wouldn’t be immediately considered punk and is a hundred times more so than most is the Gun Club. Refreshingly Suren doesn’t blame punk but his own obsession with it and in an interview about the book describes his experience as maybe feeling like the army. He now only listens to Miles Davis at home and it is maybe this need to impose “rules” on things which is part of the problem.

Punk is an attitude rather than a sound or a look and the possibility of its manifestation in any area of life let alone art is what ultimately stops it getting stale. I am sure it is this sort of meaning of punk debate which ultimately contributed to him seeking sanctuary in Costa Rica but while “Crate Digger” may work as some sort of journey of discovery for the uninitiated it is best as an entertaining yet cautionary note to us true believers who seek to place restrictions on this most liberating of ideas.

You can find out more info on Crate Digger by heading to the publisher’s website.