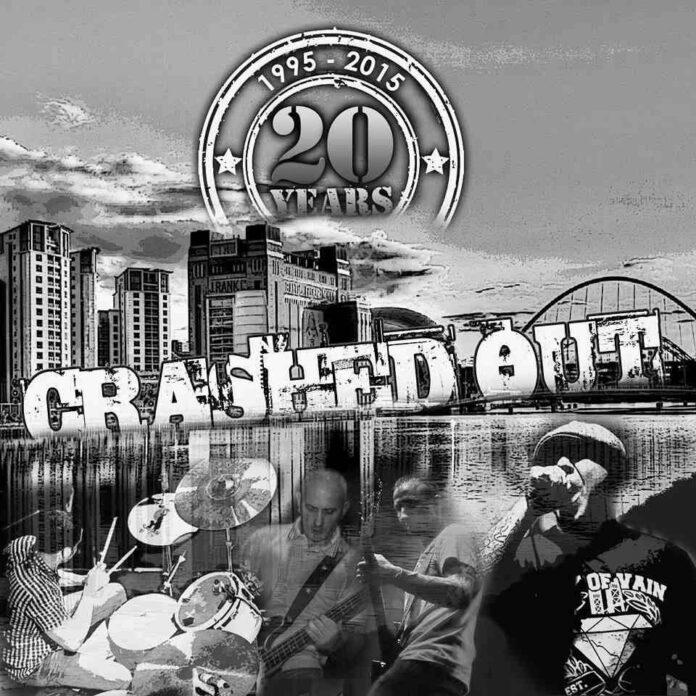 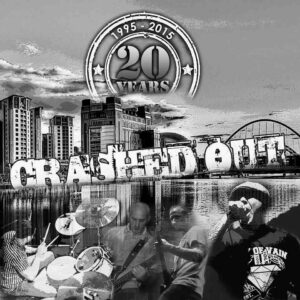 A strangely perfect storm of circumstances led to this, my first written review of live music for almost quarter of a century.

A couple of weeks ago I texted my usual gig going accomplices to ask whether they fancied going to see either Andy T or Crashed Out on the 11thMarch in Newcastle / Gateshead. Unusually, there was radio silence. At least in part I wrote off the idea as there were the other things that fill in the spaces these days, families, sport, beer etc..

Circumstances conspired. On the day the other half was a bit under the weather , teenagers otherwise interested/ engaged, football/ rugby was watched and in part enjoyed, collective troops were fed and enforced abstinence was observed and all before eight pm. It was raining by the sea where I live.

“Stuff it” says I to I, “I’ll go and see Crashed Out” at Trillians Rock Bar in Newcastle, a place that I last frequented a decade or more ago.

For the uninitiated Crashed Out are essentially a street punk band led by a guy called Chris Wright (of Viking Tattoo in Jarrow), echoing early AC/DC /Rose Tattoo in both attitude and demeanour but shot through with a distinctly north eastern side portion of humour and injustice as well as a hardcore punk spirit. They don’t play enough gigs locally!

Back to the case in hand, got to venue, walked straight in (free gig), three hundred plus people, old skins, young punks, grannies, longhairs, you name it. Support band on stage, Drama Club Rejects, old schoolish metal, nothing new, nothing bad. Crashed Out were on at half nine.

A couple of sound problems aside they blistered through a largely greatest hits set including Raise yer Glasses, Amy, One of the Boys,the Jarrow Song, The Town that Died to an enthusiastic audience. Social conscience with a Geordie slap of humour, paeans to lads, lasses and a fractured society. They should be filling stadia!

All done by quarter past ten. “OK” says I to I, what now? Home for match of the day or cross the Tyne water and see what’s occurring at the mighty Black Bull? Often a no-brainer, disengage brain and slump in front of telly. Not on this night, do it as Rollins or some corporate ad might say. Black Bull it is.

The Black Bull is a great pub tucked away amidst concrete stalag mites aside Gateshead and run by Shev and Maz, serving decent ale at a reasonable price and regularly putting on excellent punk gigs for next to no money.

And so it came to pass that I arrived at the Black Bull, not sure what to expect, I’d heard of but not heard, Andy T, bard of Todmorden, Crass collaborator, dub poet. This is where it gets odd. I’d just left a heaving bar, beery, leery, boisterous and sweaty, punk as ****  and I walked into the back room of a small boozer, at least half way through something. There’s a guy and a band in the corner, he’s fifty something, intoning dub verse in his rich West Yorkshire burr, maybe with touch of John Cooper Clarke with a different rose. There are about twenty people here, maybe including the band. Polite applause. Band kick in, bass heavy, bearded man on stage  says “still hate Thatcher” and launches into a wonderfully vitriolic tirade on said matter, little I is transfixed, this is awesome, big I is lost in space and time. Bearded man then states times is up and that his last piece is called “Sophie Lancaster”, focussed outraged and bitter against the intolerances and cruelty of what we might once have called society.

In the space of three short hours I have soaked up some of why all of this is still so relevant, this little thing , this four letter word, this “punk”.

To slightly paraphrase another “Northern” quote of the none too distant past, “I used to think that music mattered, but not as much as (punk) music and people matter”.