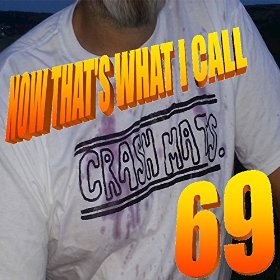 Debut release from The Crash Mats; the Oldham based three piece who are mature enough to know better, but offer up genetically modified skunk as an excuse for their idiotic antics, and retarded attitude which runs rampant across this 11trk collection of ska-punk mayhem.

‘Smoke All Night’ sets out their stall – loose ska, laced with wayward guitar, as these ne’er-do-well’s rejoice in the simple pleasure of green vegetable matter, the theme continues across ‘Pablo’ which musically suggests The Crash Mats morphed from a punk band, as a buzz saw guitar dominates the track – its raw, its primitive, and as much fun as 9 Bar in Oldham could generate; clues to the maturity of The Crash Mats are obvious – ‘Sega’ harks back to the heroic hedgehogs battle with Dr Robotnik played out over an infectious skanking rhythm.

Other weighty subjects addressed by these clowns include ‘Sausage Roll’ – 52 seconds of 3 chord thrash, as frontman Evil Baz confronts us with a diet of luscious puff pastry courtesy of Greggs The Baker’s; before the instrumental ‘Batman’ which collides the rockabilly genres early 80’s obsession with comic book characters and some eerie taut guitar plucking.

‘Royal Rumble’ is easily the stand out track; a Frankenstein blend of glue inspired Ramones pinhead punk caught whacking one out in honour of The Nature Boy himself – Mr Ric Flair the WWE 16 time World Heavyweight Wrestling Champion; from the barked vocal into “lessons learned from The Royal Rumble 1992…to be the man WOOOOO…you gotta beat the man…1, 2, 3,4!” this is an adrenalin fuelled head rush of pure 77’ punk, clattering drums, molten guitars that burn into your cranium, snatched lyrics regaling how Ric Flair defeated 29 challengers from The Big Boss Man, Sid Justice, to The British Bulldog before Danny invites his female audience if they want to watch “space bowling…hey ladies, it’s a metaphor for my penis” moronic genius!!

Somebody desperately needs to re-record ‘Royal Rumble’, and slap it out on stupid coloured 7” vinyl – we are living in dark times and this is the perfect super-kicking sub 3min distraction as the world implodes around us.

‘Now That’s what I Call Crash Mats 69’ is unashamedly raw, so much so the oozing blood threatens to destroy your CD player, it was no doubt recorded live, a single take – but that is why it works; listening to this reminds you of why every band who’s albums are racked up in your living room started out – for the unmatched buzz of playing live, for the chance to record your racket for all eternity regardless of finesse and available finance.

The Crash Mats will make you smile – and that alone is reason enough to seek this one out.