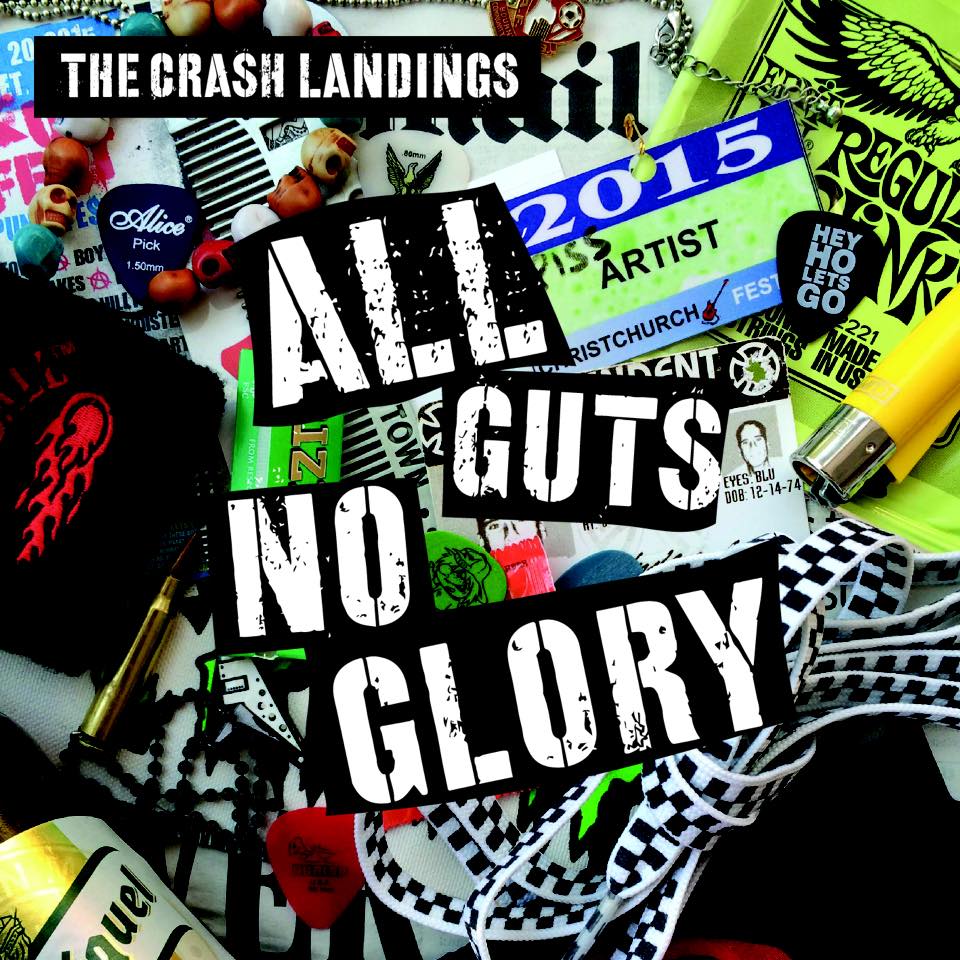 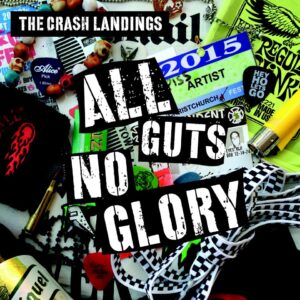 The Crash Landings: All Guts, No Glory

Ignoring all the London-centric Punk at 40 nonsense, over the past twelve months there has been a welter of new, good old fashioned UK Punk Rock’n’Roll releases from bands like Maid Of Ace, Angry Itch,  Skurvi, Archive 45 and Reaction   all keeping the faith and making fresh music, bringing back the fun and fury. Now, you can add to the list the Crash Landings from the Bournemouth area of the South Coast.

A classic album title. Ten songs in under 25 minutes.  It’s a riot of great tunes, Oi!s and choruses that are instantly likeable and distinctive. The balance of humour and street-level politics in the lyrics is spot-on.

It’s neither hardcore, nor pop-punk, more melodic Streetpunk in a Rancid meets UK Subs style. ‘Old School’ but fresh and with top musicianship. The songs are about everyday middle-age shit; Bosses that are wankers (Take your job and Shove It)  Getting old (Falling Apart) and becoming ill ( Getting My Results).  People you meet (Billys Got Tourettes) and the bullshit thrown at Joe Public (Hate Mail).  If that all sounds a bit miserable and moody, you couldn’t be more wrong, because the songs are fast. upbeat and have a fuck-this positivity about them. Anger turned into punk rock’n’roll energy.

Picks of the bunch? Well, there’s not a bad track, and none of them outstay their welcome and have any fat.   ‘Billy’s Got Tourettes’ is the oldest song and a fine piece of Leyton Buzzards style punk-pop which laughs with the sufferer rather than at him. “Don’t take offense he don’t mean to be blunt. Everyone he’s ever known has been called a…! ” And a rip-roaring guitar solo takes over the expected obscenity as singer Si cackles Rotten-style.

‘Fight Back’ is the best song the UK Subs never wrote, on which the guitarist excels himself; as I said before he really should be in a some sort of Classic Metal band, he’s far too talented to be a supposedly three-chord ‘punk’. Some dubby-effects on the guitar are cool too.

‘Shove It’ has a Garage-punk feel, a bit like the Hives, and great big-bollocked Woah-oh-oh’s. A Top Ten Hit in  a punk rock parallel universe.

Hate Mail’, arguably TCL’s best song, has a bit of Ska thrown into the mix but without weakening the full-on punkerama and a great circular guitar pattern which could’ve come from prime Buzzcocks.

Wilco Johnson gets a namecheck in the topical news report set to ramalama that is ‘And Finally…’.

The Crash Landings really have an across the board appeal punkwise; Streetpunks, Oi! herberts, retro-punks, Epitaph-punk and just plain lovers of noisy guitars and good tunes.  They should be halfway up the bill at every  Rebellion, Undercover and New Rose type punk festival next year if there’s any  justice.

This is a great, extremely well-produced, result of a couple years hard writing, rehearsing and gigging and for a DIY release, a worthy addition to any punk rock collection.