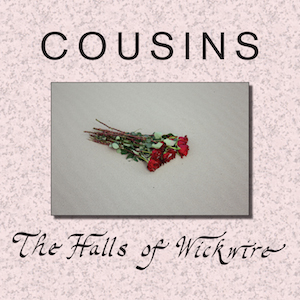 Cousins –  The Halls of Wickwire

The best part about two-piece bands: there is no place to hide. You either bring your A game or you hang it up, or you add musicians and become a “band”.  On the Halls of Wickwire, the Halifax duo, Cousins, create a wall of sound that is lush, raw, and melodic. They bring it. Then set it ablaze. And then dance on the ashes.

I imagine that Halifax is a lot like coastal New England and Wales. The weather changes quickly, sometimes violently.  And the vast horizon of the cold waters of the Atlantic are always there – for some people providing a very real and safe boundary to reality, and for others opening up the imagination to the possibilities that lie beyond the horizon. The ocean appears in several references on The Halls of Wickwire (including in  the titles of two songs), and the music provided by Leigh Dotey and Aaron Mangle take the listener over that nautical horizon and then some.

Cousins hits all the right buttons, impressive considering there are only two people manning the ship. There’s great song writing, lots of noise and fuzz, a tight performance, and surprising melodies. Almost every song on the album is carried by the steady hand of Dotey’s creative percussion, providing interesting shifts in rhythm against which Aaron Mangle drapes layers of massive fuzz guitar and occasional melodic leads. But the vocals and the lyrics bring an added layer of both sound and smartness to the music. Both Dotey and Mangle sing and their voices neatly cut through the wall of noise, creating the melody for each song and adding additional sonic interest in their blended vocals. The multiple elements of sound provided by the pair allow them to tack back and forth between different genres and influences. There’s a definite garage-rock sound, as well as punk, and noise.  But there’s also something else. Cousins demonstrates that if you have two super talented people working together the possibilities expand. Songs on The Halls of Wickwire would be best described as expansive sounding. This is not one-dimensional balls to the wall two-piece thrash. It’s smart thrash. It’s post-punk. I fucking love it.

The songs on The Halls of Wickwire have a quick pace, accompanied by quick changes. Given the stripped-down arrangement it’s easy to focus on what Dotey and Mangle are doing in each song – and their performances are impressive.  The album was recorded over the course of one week at the Candle Studio in Toronto, and each of the ten songs on the album has a very “live” sound. The engineering provided by Josh Korody and Graham Walsh enhance the sonic elements to great effect. The album has a garage / lo-fi feel, but it also has a sparkle.

The opener, Phone, comes crashing out of the gate with a walloping drum-beat, and an almost 60s pop guitar progression and vocal melody. Add reverb and delay, and Phone goes from a simmer to a boil that careens through verse and chorus- and crosses a bridge that immediately gets your attention. This is smart work.

Other Ocean highlights the songwriting and composition skills of Dotey and Mangle – the voice and guitar provide a bright melody which swerves into a chorus that goes into overdrive: “You came back to the ocean.” The guitar and drums are in perfect sync and go out of sync by design. Mangle’s guitar work is not typical riff-rock. The melodies are angular and he masterfully switches between power chords and leads. In parallel, Dotey isn’t just providing a back beat or sitting in the back seat, the percussion is up front and works as a lead instrument in its own right. Skilful engineering also enhances the drums by their placement in the mix. But let’s be clear – in a two-piece band good percussion can either make it or break it. If you need a lesson just focus in on Dotey’s drumming. Nothing is over-done. Cousins are teaching a masterclass in creative composition and arrangement because smart arrangements allow a duo to keep your constant attention. Just when you think you’ve figured out the Cousins sound / game the next song changes your opinion. The Halls of Wickwire might be a challenging listen to some folks, but for others this is going to go straight into your summer playlist on constant repeat.

While most of the songs on The Halls of Wickwire are hard-chargers, they go down-tempo and quiet on At Odds (at least for the beginning of the song). Like other favorite duos of mine, like Sweet Benfica and Local H, Cousins can go from slow and quiet to fast and loud in a split second – and that’s a rare talent. And when the guitars crash on At Odds it’s well-timed and well-constructed – similar to late 70s art bands like Wire and the Talking Heads.

The closer to The Halls of Wickwire, Singing (see above), takes us out (relatively) quietly. But this song is the most melodic of the ten, with the bittersweet lyrics: “This is the last time that you’ll hear this song, the notes will stop, there won’t be any sound” It’s a song about a song. Kind of meta, but not in that dreadfully pretentious or ironic way. In Singing, Dotey and Mangle push their songwriting, arrangement, and performance – and the outcome is actually beautiful. Singing is one of the slowest and is actually the shortest song on the album. It is also one of the best and most complex of the ten and a great one to end the album.

I’ve been blasting Cousins for the last couple of weeks (it demands high volume), sometimes while walking along the edge of the cold Atlantic waters. Looking out at that endless, grey, gloomy horizon while listening to The Halls of Wickwire, I could imagine summer. Thanks, Cousins.  I needed that.

You can learn more about Cousins and purchase the album here: badabingrecords.com and / or here: handdrawndracula.com.

All words by Nat Lyon. More writing by Nat on Louder Than War can be found at his author’s archive here. Nat’s also tweets as @natlyon.