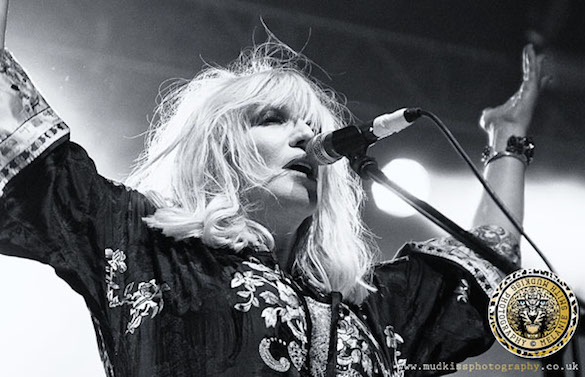 International train rock, celebrity car crash, wife of deceased rock star blah blah blah…for too long Courtney Love has been hogging the wrong headlines. Famous for being famous it was like everyone had forgotten that once many years ago she was actually in a damn good band, Hole, and had her own musical career to worry about before the whole Nirvana circus swamped all that out.

Since then it’s been false starts and attempts to find an outlet as Courtney has tried to please everybody and pleased no-one. That was until tonight when she tuned up in London and like a high decibel blow torch relaunched her career in one powerful gig that wiped the slate clean of ally he celebrity bullshit and got back to the high octane that she was put here for in the first place.

It matters little what you think of her/her history and the surrounding culture this was a brilliant rock n roll gig with a fierce passion from brilliantly crazy, highly intelligent individual who has finally remembered just who she is and why she is here. Brilliantly chaotic and walking on the tightrope of danger Courtney somehow kept her balance with a set that was shambolic like all great rock n roll should be and as dangerous and mad as it must be.

At nearly 50 she was unapologetic, age had not mellowed her and somehow underlined all that as once great about her. Tonight Courtney finally stepped away from the circus and got on with what she does best and her fierce, unapologetic and thrilling mess of rock n roll played with the fierce and dangerous attitude of punk rock was raw, thrilling and sexual rush of urgent danger that reinvented the old songs that made the fact that the set only and one new song in it not important.