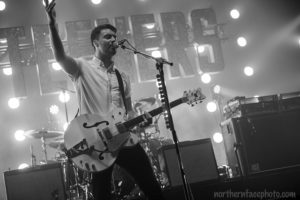 The Courteeners close out a busy year, that has seen them play not only Glastonbury Festival, Isle of Wight Festival, V Festival, T in the Park in UK but also sell 25,000 tickets to their own Heaton Park summer gig in just 40 minutes, with a series of nights’ at Manchester’s O2 Apollo Louder Than War’s Katie Clare went to see how the first night played out.

Kicking off a sold out seven-night residency with an audience so overexcited that there is barely a corner of the arena that’s not chanting, singing and in some cases literally bouncing off each other in good nature-ed high jinks. It is with a similar amount of exuberant pizzazz that the stage explodes flooding the venue with lights and sparkles as the familiar drum intro of Are You in Love With a Notion? becomes audible – the sing along chorus brings the level of joyous camaraderie in the room to maximum levels.

That high is steadily maintained as the bobbing march of Cavorting has every one of the 3,500 bouncing in time and you can feel the balcony recoil under the pounding vigor. Structural damage at Shepherds Bush Empire forced The Courteeners‘ show there to be cancelled on Friday and you can certainly see the reasons for caution – the mass below is as the one above no one can stand still. “Good evening Manchester” imparts Liam as a huge bunch of orange roses are propelled in his general direction, beats a smoke bomb for sure, in seeming deference to the clearly much loved front man they scatter themselves front of the stage – leaning over plucking one up Liam stashes it in his guitar. 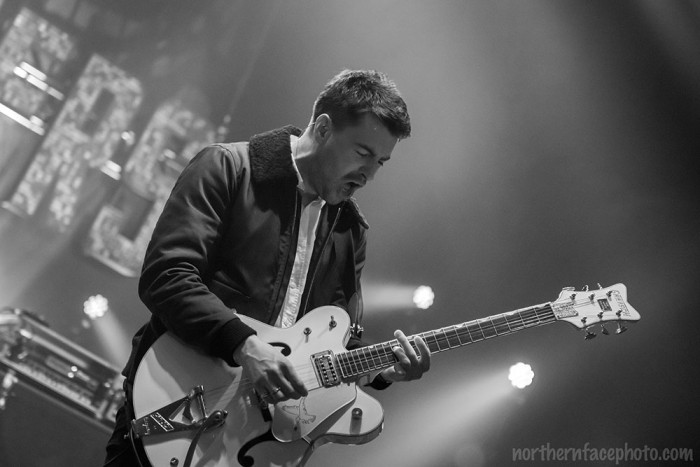 The sound does suffer a bit, however,  it doesn’t really matter the band seem not to be having a meltdown over the issues and the audience is not complaining – happily filling in where necessary. All things seem perfectly in balance as Courteeners fly though past memories: Acrylic, Kings of the New Road, How Good it Was and a magical Please Don’t – Roses fans noting with extra elation at the sliding in of Standing Here. “I will be safe forever in your arms … I will be safe forever in your arm’s” and if Mr Fray had not already got everyone in the palm of his hand this certainly pulled in those few stragglers.

There is chat and interaction which is unexpected for a band that crams in twenty tracks after not one but two supports: Those being tonight Declan McKenna and Pretty Vicious the latter delivering some sonically mesmeric thrashy-ness that was disproportionate parts melody and noise: damn good stuff sadly however they did not spark a ‘Merthyr’ chant to replace the by now ubiquitous ‘Liam’.

While the expected high points don’t disappoint it is the unexpected moments that seemed to stand out. The Courteeners current single Winter Wonderland (from which the charity Shelter benefits from all proceeds) is proceeded with a passionate plea to not ignore the city’s homeless. Liam’s spotlighted solo mini-set included b sides Three Months and Smiths Disco “And I’ll choose what we wear, About four weeks before” these lyrics and a seemingly grinned through resigned delivery are real life identifiers that draws people in to where they feel an affinity: He knows how it feels, he knows what it’s like, he’s been there and with the same recall and excitement (that every fan boy and girl will recognize) in his voice he shares his music history, who he saw, where he saw them and where he stood. 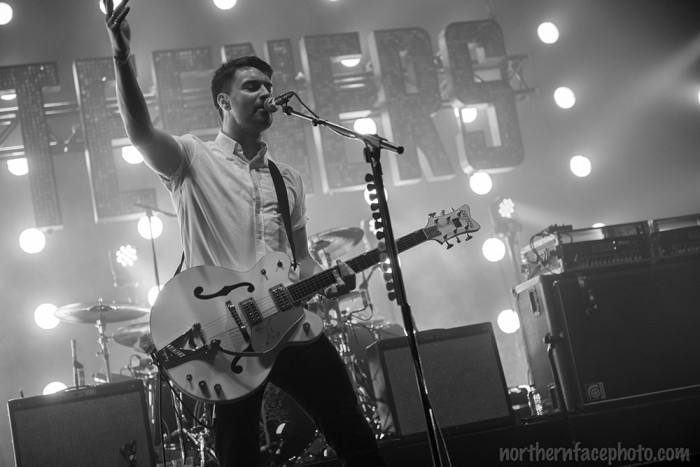 The Courteeners regather to take things out on a high eventually ending the night with Not 19 Forever and What Took You So Long? surprising no one – delighting everyone the songs setting off a seemingly relentless string of celebratory crowd surfers rolling their way to the front to be gathered up by the yellow polo shirted security – gleeful punching their arms in the air as their feet find ground again.

As the speakers pumped out reverb the Courteeners took in the jubilant appreciation: Liam gathering up a handful of the roses, that had graced the stage enjoying what had to be the best seat in the house all night, jumping into the pit and handing them out to the front row along with hand grabs hugs and thanks it was a good 10 minutes before he finally left the pit the house lights came on and we shuffled our way into the cold Manchester night and in to the tussle of T-shirt sellers asking and answering their own question “Can you play guitar? Can You Fuck” a quirky end to a gig full of genuine fun and one that felt just a little bit magical too.~

Winter Wonderland is available now All profits from the single will be donated to Shelter – the housing and homeless charity, Download on iTunes or pre-order a limited edition 7” version here.

All Photos with thanks by David Gleave of NorthernFacePhoto. More of Dave’s photos can be viewed via his official website, Flickr  and Twitter where he tweets as @northernfacepho. All Photos © David Gleave.